“The Flash” #69 concludes the arc focused on the classic rogue Trickster and, by doing so, relies on a familiar trope of the speedster’s comic of having a rogue on the spotlight. For most of it, it succeeds, despite certain flaws around character choices. 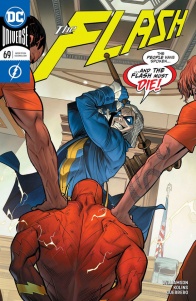 Riot in Central City! Trickster has pulled out all the stops in his assault on Flash’s hometown, and the Scarlet Speedster is powerless to crack Trickster’s code! Our hero is faced with an impossible choice: save the people of Central City—or let the villain who caused it all escape to wreak havoc another day!

Alongside Batman and Spider-Man, the Flash has one of the best rogue gallery on all of comics. This roster of villains, composed by original enemies, legacy versions, and brand-new antagonists haven be aptly used by writers of the scarlet speedster in the past to great acclaim, with runs by Mark Waid and Geoff Johns usually being pointed as seminal trajectories. Those stories usually bring additional elements to these villains making them more three-dimensional, if not outright likeable.

It is not unusual at all, then, to see writer Joshua Williamson attempting to make his own mark on this long-standing tradition. The writer has adopted this take on his long-standing ‘DC Rebirth’ run, but it shines the most on this most recent arc, largely due to the revitalisation attempt for the classic Trickster. He did quite well for most of this story, and although he stumbles on some aspects on this final entry, it remains quite strong.

Before discussing that much further, thought, the kinetic art department of Scott Kolins remains a key selling point for this book. Kolins is no stranger to “The Flash,” and fans have grown used to the energy he infuses to the hero’s adventures. The well-utilised movement lines, the faces filled with expression and surprises, that is all there. However, Kolins has made some choices for some pages and panels that are beneath his usual high-quality. There are some less-than-inspired layouts that simply seem to take up page space without offering anything in return. Additionally, backgrounds simply vanish on occasion, especially when Flash and Commander Cold are talking to each other. Those white spaces bring the action down to a crawl, and, without working as a pace mechanism, seem out of place.

Guerrero on colors is far more consistent. For a book the leverages so much on speed, action and explosions, the work of the colourist takes centre stage on multiple situations. His work on the different powers and energy signatures, on the effects that the speed force causes to those around it, and even the brightly-colorer uniforms of both heroes and villains are a joy to look at.

Back to Williamson’s script, there is quite a lot to appreciate. Not only does the writer flesh-out the backstory of the Trickster, it does so without making it too unilateral, with the traumas that the villain have gone through being shown in a nuanced manner and less apologetic than usual. His master plan is surely outlandish, but well within what is acceptable in terms of the suspension of disbelief for comics. And the overall conclusion to the story, with partial success for the hero and compromises that had to be made, quite balanced.

Where readers can draw criticism from is how the Trickster sometimes devolve to a paint-by-the-numbers maniacal villain. Within the DC pantheon, there is a large shadow called Joker that looms over villains that lean too much into the deranged and chaotic craziness. For most of the story, the Trickster avoided becoming a pale comparison of the clown prince of crime, but on this final chapter, where the stakes are at their highest, the writer fails to use his past restrains and some of the character’s punch is lost in the shuffle. It is not something that reduce the enjoyability of the issue, but it is certainly noticeable.

Finally, Williamson has grown quite effective on mastering the serialised nature of comics. While this particular story ends, the writer already weaves in new mysteries and connective tissue to the next arc, that of ‘Flash: Year One.’ It is presented in an interesting manner, likely avoiding the sense that it is a skippable story by the way it is shown on this issue’s epilogue.

All in all, “The Flash” #69 is a strong conclusion to this Trickster-focused arc that, despite losing some of its power on missed villain opportunities and illustrations that fail to reach the height the artist is known for, still manages to show more color for the Rogues.

Final Verdict: 7.1 – “The Flash” #69 reaches the finishing line in a strong note, but loses some points on execution that could have been easily prevented.