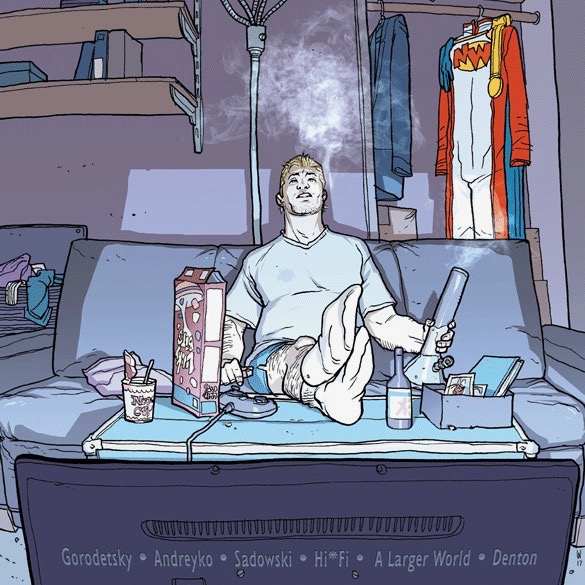 “The Further Adventures of Nick Wilson” is built on a solid premise, but after a lackluster debut that doesn’t reveal a whole lot more than what we already know from the solicit, where the series goes after this is anybody’s guess. (Warning: contains minor spoilers.) 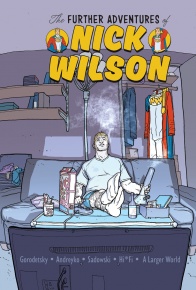 For a few years in his early 20s, Nick Wilson had super powers and all the acclaim associated with them. When those powers vanished, so did his fame, sending him from national hero to late-night punchline. By the time we pick up his story, he is not yet 30 and barely an answer in a trivia contest. Faced with a life in a rear-view mirror full of lost powers, faded glory, former enemies, ex-girlfriends, and forgotten grudges, Nick struggles to figure out who he is today. Packing on an extra 20 pounds and peering through a medicinal marijuana haze, he is trying to build a future when all that’s left is just a man who hasn’t been super for a very long time. These are THE FURTHER ADVENTURES OF NICK WILSON.

Eddie Gorodetsky, co-creator of “The Further Adventures of Nick Wilson,” has hundreds of TV sitcom production credits to his name. On the back of this debut issue, the likes of Elvis Costello, Sarah Silverman and Penn Jilette sing his praises. In terms of the small screen, at least, the man is bona fide. The book’s other co-creator, Marc Andreyko, on the other hand, has won both a Harvey and an Eisner and worked with Brian Michael Bendis. Clearly, he brings the comic book street cred. At the end of the day, however, their partnership can’t help but feel at least a little bit like a marriage of convenience, resulting in a piece that often reads like a TV script wedged into comic book form.

Honestly, the central premise is solid, but not exactly earth shattering. A former superhero (Nick Wilson), now devoid of his super powers, sits at an unwelcome crossroads. Unable to return to his former glory, he’s not exactly willing to accept that fact and simply move forward, either. Overcome by inertia, he pretty much does nothing at all. So, in order to make a few bucks, he pretends to be a celebrity impersonator, who conveniently plays his former self. Naturally, at some random kid’s birthday party, Wilson not only gets puked on, he nonchalantly ignores the single mom’s sexual advances, too. Instead, he simply goes home (after a car accident) and self-medicates with bong loads alone on the couch.

Kind of sounds like the synopsis for an edgy new Netflix series. Who knows? Maybe someday it will be. In many ways I can’t help but feel like this book is a glorified pitch, designed to build hype and land a lucrative deal for the pilot. Nothing wrong with that, really, but in the end a comic book and a TV show are still two different things. Not everything plays the same way across the two media, as we have seen many times.

Unlike the script, however, which sometimes starts to feel like a collection of pop culture tropes you swear you’ve seen before, Stephen Sadowski’s illustrations add a refreshing layer of authenticity and charm. His shot selection and framing are great and his character expressions are consistently top notch. Obviously, in a book like this, the protagonist needs to walk a fine line between being an unlikable wreck and a sympathetic “everyman” anti-hero. He’s sure as hell not a role model, but we have to feel for the guy or the whole thing just falls apart. On that count, Sadowski delivers. Drawn with an affable smile and disarming good looks (despite his uncool wardrobe), the titular main character indeed makes us laugh, but also tugs at our heart strings.

The other characters, too, are also very well rendered. Sadowski’s clean, simple backgrounds keep the reader focused on the character’s faces, especially their eyes, which do an excellent job of communicating emotion and subtext. The moments between Nick Wilson and his old flame from high school (Jane) are particularly noteworthy, suggesting there’s much more to come. The style leans heavily toward realistic, without a lot of bells and whistles, but that fits very well with the story.

Similarly, Hi-Fi Colour Design’s understated, slightly retro color scheme also keeps the book firmly rooted in a highly relatable, familiar, real world setting. In that sense, the real strength of the book’s colors is that they don’t go out of their way to call attention to themselves. There’s also a very subtle, faded quality to things, as though the colors leached away while the book sat undiscovered in a cardboard box in the attic for the past 20 years. Just one of the many ways that the notion of distant glory days is cleverly reinforced.

Ultimately, the first issue succeeds in creating empathy for its washed up former super hero. The relationship between Nick and his official/unofficial business manager is a bit clichéd, but hopefully that will change and evolve as we move through the series. In any case, we understand who these characters are, and for the most part we know how they got here. It’s time to kick things into gear and get to the heart of the matter. We need to understand what makes Nick Wilson special – worth telling this story about – and what he actually wants. We understand the prologue, what’s the story really about?

Final verdict 6.6 – This book holds a lot of promise, but the debut underwhelms, despite excellent pencils and colors.