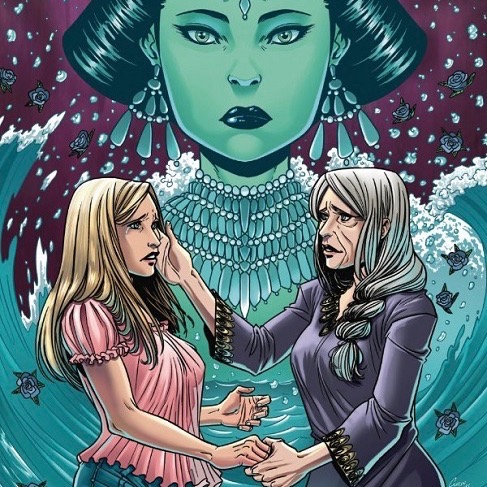 With striking imagery and spectacular colors, “The Girl in the Bay” #2 tends to raise more questions than answers, but it’s trippy blend of horror and urban fantasy is a compelling combination. (Warning: contains minor spoilers.) 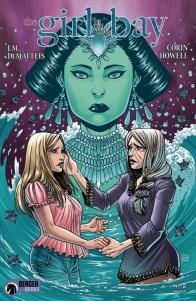 Is it possible for the same woman to be murdered twice? Thrown fifty years into the future, lost in a world both familiar and terrifying, Kathy Sartori tries to solve the riddle of her own murder – only to find herself faced with another tragic and brutal death.

Oftentimes, second issues are devoted to adding depth and nuance to the characters and events presented in number one. Typically, the debut issue starts with a bang – ignited by the proverbial inciting incident – scarcely stopping to explain things or add much in the way of detail until things end with a cliffhanger, provoking more questions than answers. Hopefully, as issue number two unfolds, the creators take a step back, revealing backstory and answering key questions while driving the story forward. Granted, it can feel a bit formulaic, but for the most part, it’s what we know, so we accept it and play along.

Rarely does a second issue add breadth instead of depth, introducing a new character from seemingly out of the blue, taking the story in a whole new direction and raising even more questions. And yet, that’s exactly what happens in “The Girl in the Bay” #2. In this way, it almost feels and functions more like an alternate version of the issue that launched the series than it does a true second installment. It also infuses a story that more or less began in the urban fantasy genre with unmistakable elements of horror and suspense, creating a hybrid tale that plays by its own rules.

Things open on a park bench where a present day Hugh Lansky, Karen Sartori’s murderer from the debut issue, talks with what appears to be an enormous, malformed, grotesque version of his doppelganger. From there, we cut back to the encounter between the two different Karen Sartoris that ended the debut issue. As the two of them speak with each other, trying to piece things together, the Karen who emerged from Sheepshead Bay suddenly has an unsettling vision, freaks out and flees to Manhattan. Eventually, wandering the streets of Greenwich Village, she meets the legendary singer/songwriter Winston Burton (referenced very briefly in the debut issue), who looks exactly as he must have 50 years ago, not having aged a day since 1969.

Honestly, a lot happens in this issue, even as the story slowly spirals outward, enveloping new characters and different story dynamics, shifting the narrative focus away from the protagonist onto secondary characters and emerging subplots.

It can be a lot to digest and even when you think you’re following all of the threads, the nagging feeling remains that you probably missed something somewhere and don’t fully understand the subtleties of the story. Maybe there’s a deeper meaning to the various images and events, maybe what we see is what we get and it’s ultimately all pretty simple. I don’t really know, but it’s definitely the kind of book – moody, haunting, mysterious – that makes you want to believe, all that we see or seem is but a dream within a dream.

With psychedelic imagery from the Sixties as a base layer, Howell’s inks and Devlin’s colors evoke Free Love and Flower Power, casual sex and plentiful drug use. Like numerous album covers and black light posters of the time, the lines are intentionally blurred between reality, drug-induced hallucinations and enlightened, ethereal visions of worlds we cannot see, beyond this physical realm. With spectacular, vibrant colors and intricate, detailed line work, Howell and Devlin weave a rich and multilayered tapestry that deftly avoids clichés even as it references familiar tropes. We know the visual grammar, but the execution sets it apart and makes it special.

The splash pages, in particular, are a gorgeous visual feast. Playing on the Buddhist concept of satori, commonly defined as spontaneous enlightenment or an almost instantaneous spiritual awakening, when Karen Sartori physically touches the hand of another character, she experiences a complex and colorful flashback encapsulating that person’s life. And the results are incredible. Linger on these pages and soak in all that they hold, from joy to sorrow to terror, from key historical moments and iconic events, to personal triumphs and tragedies. They’re delightfully complicated, nuanced and multilayered, but do the heavy lifting on what would otherwise be pages and pages of exposition — a tradeoff that’s very much worth it.

Ultimately, there’s not a ton of clarity as to what exactly is going on, but that’s also this issue’s power. It definitely raises more questions and hints at unknown directions, but the story sucks you in and leaves you wanting more. We still don’t really know what makes Karen Sartori tick and why she disappeared for a full half century of life, but we’re clearly going to find out and it promises to be very interesting indeed.

Final Verdict: 8.2 With a unique combination of horror, suspense and urban fantasy elements, “The Girl in the Bay” #2 delivers a spectacular visual feast, even as it raises more questions.