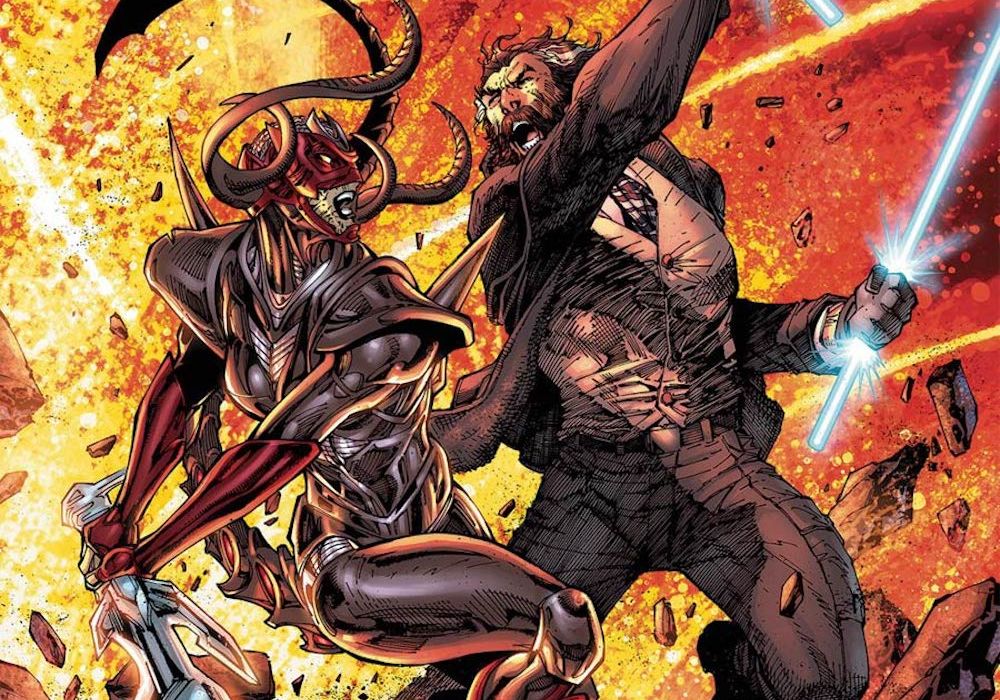 Witness the dawn of three members of the House of Action in “The Immortal Men” #4.

Can an Immortal Man hope to defeat an Infinite Woman? Armed with a weapon courtesy of the Batman Who Laughs, the Infinite Woman takes aim against the Immortals. It’s the House of Conquest versus the House of Action in the oldest secret war in the DCU—now revealed to the world!

For a series about immortals, “The Immortal Men” is rather fast-paced. Each issue seems to move quickly, and this fourth one is no different. If anything, James Tynion IV does a lot more with “The Immortal Men” #4 than the other previous issues. A lot more happens in this one issue than the previous ones, making it appear to be the climax of the ‘The End of Forever’ arc itself.

While there is a lot of emphasis on the battle against the House of Conquest’s demonic Bloodless, Tynion balances that battle with an array of origin stories. Each of the stories is told in a different way. The tale of the origins to the Immortals, of the Immortal Man, the Infinite Woman, and the other Houses, is both shown and told, with just enough action on the page to help understand things effectively. The way of showing the five different Houses, including the yet unseen Houses of Knowledge, Harmony, and Expression, gives some bases for how to move the plot forward into later arcs, planting seeds for later developments. The way in which Vandar Adg (most commonly known by his modern name of Vandal Savage) is utilized without actually requiring him to make an appearance gives lip service to the old rivalry with the man, but without making it too overbearing in light of the fact that he was the only publicly known immortal until recent times.

The tales of Timber and Stray are each told without as much detail, the former only in narration, and without imagery to go alongside it. While Timber’s twist on the tale of Paul Bunyan is a fun way to examine how legend fades to myth across different cultures and times, the effect just isn’t as potent as the rise of the Immortal Houses, especially given we had a taste of it with her explanation in a previous issue. Meanwhile, Stray’s origin is condensed to just a few panels, and Tynion seems to just throw it in so as to wrap up the list of backstories for the House of Action’s remaining members before the introductory arc ends. In all, Stray seems to not fit in with the rest of the series so far, both in terms of origin and in terms of general ideology. Perhaps she will have more focus later down the line, but such a theory has little promise thus far.

Even with the multiple origin stories, the present day tale is not negatively impacted in any major way. The concentration on the Immortal Man is long overdue, but Klarn Arg of the Bear Tribe does not disappoint, showcasing what it means to be a warrior from before even the first sword who has access to eons of knowledge and martial advancement. Meanwhile, the peppering of humor around the issue where appropriate, including some references to modern culture courtesy of the 21st century Immortal, Caden Park, help to ease the tension, getting a chuckle or a groan out of readers despite the overall focus on the serious nature of the previously undercover war going out into the open.

Tyler Kirkham’s artwork is perfect for “The Immortal Man.” His attention to extreme detail allows for intricate facial expressions and attention to facial dialogue to convey emotion as much as the dialogue itself. Furthermore, the detail allows for the battle shown to be at once cartoonishly over the top and beautifully rendered, with a healthy dose of disgust on top for the spurts of blood and the horrific looks of the inhuman, animalistic Bloodless.

Perspective is key to Kirkham’s success, with different effects depending upon the situation. A far-off viewpoint, be it simply to show silhouettes or a bird’s eye view, helps to demonstrate how far in the past some of these flashbacks are. The use of a worm’s eye view at some points help to showcase the sheer levels of power at work, while a close-up to individual faces helps to emphasize people’s reactions to the various goings-on of the immortal conflict.

Kirkham’s portrayal of the glowing energies of Ghost Fist work well with the more mundane power sets around the battlefield due to a very dynamic feel to the entire endeavor. The use of a multitude of images featuring the same character overlapping one another helps to convey the speed of movement in a way that is often only seen in users of actual superhuman speed, as well as making examination of Timber’s size shifting that much easier.

Arif Prianto’s colors are beautiful, and as varied as the perspectives used by Kirkham. The green glow of certain flashbacks is similar to that of Ghost Fist’s ghost energy, both equally ethereal and yet fitting in with the general theme of the overall weirdness. The different magics in Babe the Blue Axe give a more hopeful, knowable air to the story with its particular shade of blue. Most prominently, the rainbow of colors that come from the meteorite in ages past is portrayed as if it were an aurora that settled on the Earth, both an unnatural element and a curiosity that perhaps gives rise to at least some of the different glowing colors of the various immortals.

In general, “The Immortal Men” continues to impress both from a narrative and a visual perspective. Hopefully now that the origins are more or less out of the way, the story can move at a more natural pace rather than having forced interludes.

Final Verdict: 7.5– A great story with many different elements combines with dynamic artwork, but perhaps could do with a bit more focus at times.