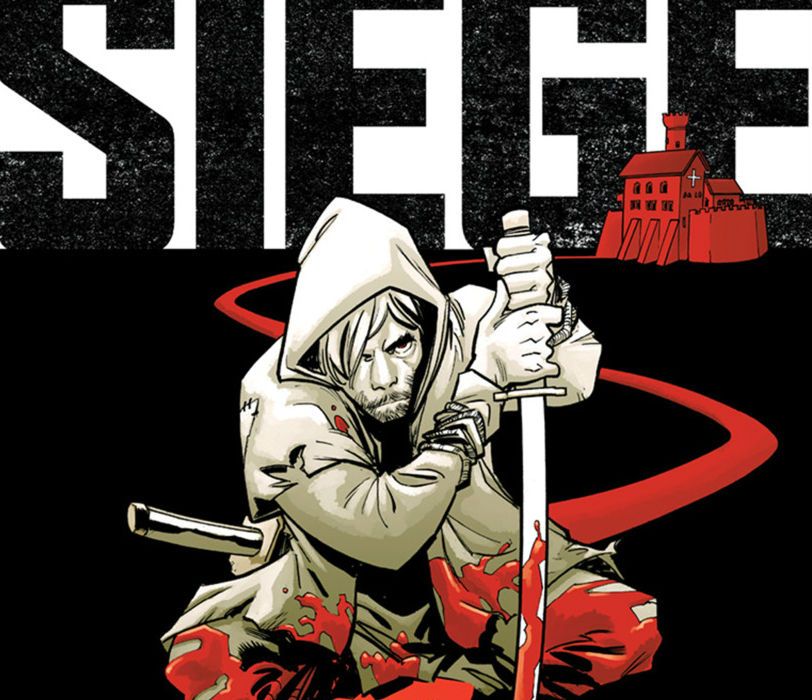 “The Last Siege”, the most recent series to be launched by Image, offers a blend of narrative styles on its first issue as it introduces a new world and characters. And while not all elements come together perfectly out of the gate, this debut gets more things right than not. 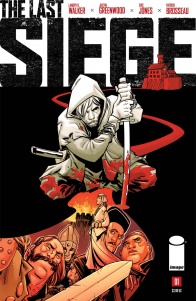 The ambitions that Walker, Greenwood and team have for “The Last Siege” are clear from its opening pages, when the cinematic feel of the issue is made abundantly clear. The lone protagonist, wandering through a mysterious patch of land and woods, as a castle looms in the distance, is enough imagery to evoke classic movie moments and stories. Before the issues ends, readers may connect with The Man with No Name (or Yojimbo before it), or even recall the gradual transformation of Strider into Aragorn from The Lord of the Rings. Regardless of past reading and viewing experiences, though, “The Last Siege” can pull the audience in with its strong mood and slow reveals.

Greenwood’s art excels on some areas, but can come up short on others. The wider shots, especially those opening moments where creepy ravens are “out-creeped” by the even stranger wanderer are great, setting the tone for the entire story. The use of thick trees helping to frame the panel design pulls both the protagonist and readers further into the subsequent pages. Later, Greenwood also shows a strong style for action, with a vicious depiction of bruises and broken bones, fast-paced and effective: these are not characters pretending to battle. The use of rain drops from the actual surroundings proxying as movement lines is also a clever way to remain true to the provided settings without cluttering the overall imagery.

The downside to his artwork fall mostly on character designs: there is a lingering similarity among lead and supporting cast, save for the ones with clear distinctive features (“the tall one”, or “the little girl”). There is little in terms of nuances, facial expressions and clothing to tell them apart, to the point that the issue reads much better a second time when one knows better who is who and what is going on.

The same can be said for the colors by Jones. Lightning, mood and settings are all excellent: this place feels real and has a sense of consistency that grounds it, aligned with the lack of any outlandish element from the script. It is on the more granular details that it fails to be distinguished, again with characters individuality paying the price. It simply gets to a point where the predominant earthly tones simply dominate entire pages.

Back to the larger story and script by Walker. Where it is the most successful is on the mashing of styles and on the anticipation it generates. Reading like a hybrid of capes and swords with a western sensibility, the danger and action the unnamed protagonist goes through are very compelling, especially on a second or third examination. It is refreshing, and perhaps surprising, that the lack of any fantastic element (there are no dragons, magic or supernatural component to be found on these pages) adds so much to the story. The stakes feel real, the consequences seem final, with no out-from-the-left-field solution to be provided to aid any character.

However, it seems that to make the overall story work, motivation and more fleshed out characters were left on the back burner for subsequent issues. While that is fine on a sequential narrative, readers may find that the most character-driven moments are contained to some few moments, and largely delivered by the supporting cast, especially on the exchanges between the Chancery and the Bishop. It will be up for further entries to explain who that strange man wondering through the woods is, how he came to the position revealed at the end of the issue and the broader political intrigues surrounding the last siege and its governing ruler.

Final Verdict : 7.5 – A debut issue that explains just enough to keep readers invested, taking a chance on narrative and setting mash-ups that really work based on the merits of a mysterious scrip and moody art style. While some additional layers would be beneficial on character designs (both around motivation and visual representation), this first issue should bring the audience back for more.