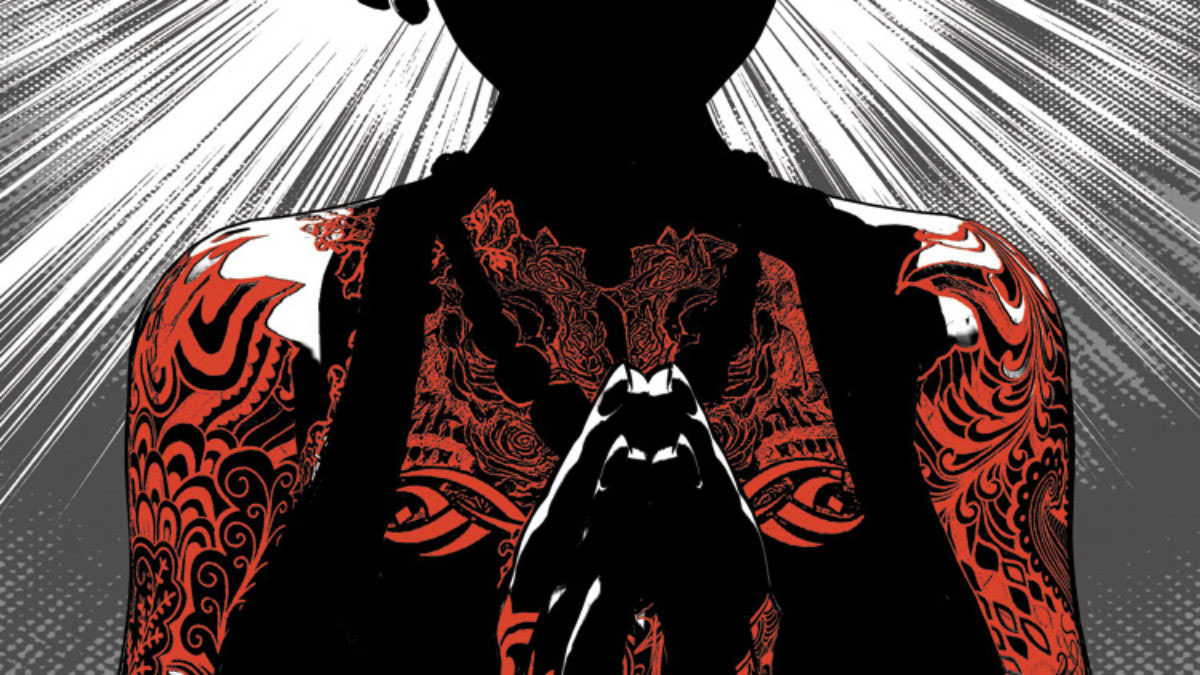 We have long since been disabused of the notion that tattoos are the hallmark of criminals, sailors, gang members, and other related ne’er do wells. Tattoos are cool. Moms have tattoos. Dads have tattoos. Your kid’s elementary school teacher has tattoos. Tattoos have become an excepted accessory in the 21st Century, much to the chagrin of our aging parents and grandparents. It’s a brave new world for ink, and Image Comics’s “The Marked” arrives to the tattoo party with a high concept take on the mystical origins of body art for a secret society of people who are part of a centuries-old secret order that helped defeat the likes of dragons, krakens, vampires, and, um, Hitler. Trust me, it all makes sense in the context of David Hine and Brian Haberlin’s brazenly ridiculous imagined history of the age old battle between paranormal good and evil. Whether “The Marked” leaves its mark on readers relies on how willing they are to accept the book’s unapologetically far-fetched premise and overlook the book’s possible underlying fetishes. 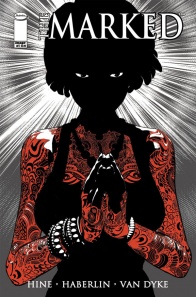 The Marked may look like cool young influencers, but beneath the designer clothes, their bodies are tattooed with the magical glyphs of an ancient order that secretly protects the world against evil forces. With no new occult threats, The Marked use their tattooed powers solely for the pursuit of pleasure until a young woman called Liza creates a dangerous new form of Hybrid Sorcery. The party is over for The Marked. You’ll believe in magic-terrifying, soul-destroying magic.

When the tattooed and horn-rimmed glass-wearing female staff working the switchboards made their first appearance in the John Wick trilogy of films, they exist as a clever juxtaposition. They’re fashionable and cool but also act the homogenous faces of criminal bureaucracy. In “The Marked,” the characters are attuned to mystical forces that their super-powered tattoos embody or represent. Much is made of the pseudo-historical significance of the group in Hine and Haberlin’s script, but in recent decades their once-noble aim has laid fallow. Some of the younger members in the group have turned to hedonistic pleasures and have traded their charges for clubbing. In fact, the script gives short shrift to what these people have been doing for all these years other than maintaining membership in some post-modern gothic social club.

While there’s some parallel to the Ancient One’s training of future sorcerer supremes for an ongoing battle against the dark arts in Marvel’s Dr. Strange mythology, the ills that currently plague the world, like war, slavery, drug addiction, and abuse, are back-handedly brushed off by Mavin, one of the group’s mentors, as human mischief instead of real threats. It feels like a missed opportunity. Why not attribute the forces of evil to these things in such a street-level setting? In fact, the book’s central irony is that in the yoking together of science and mysticism lies the newest threat to society. The creation of hybrid magic by way of this criminally unexplained science developed by Liza to trick out existing powers, perhaps commenting on human hubris or even the aforementioned mischief, exists solely as a means to make their aimless lives more interesting. Herein lies the problem with the book’s narrative. The next threat comes not from without but within. When Mordo rebels against his training and devotes himself to using magic to blot out the use of magic in the conclusion of the MCU’s Dr. Strange film, it felt ironic but earned. Liza’s mischief feels like the opening of Pandora’s box, and it trades real evil for the folly of youth and misguided initiative. It’s tragic, but it also seems like something that could have been undone or prevented with a little TLC and coaching.

Apart from that head-scratching but not minor plot point, “The Marked” is a fun and brisk read with art by Haberlin and Van Dyke that keeps the story visually interesting. The story largely unfolds through the young eyes of Saskia, the group’s newest charge who loses control of her powers and loses sight due to Liza’s meddling with forces she does not comprehend, and at no point should readers lose this first issue’s narrative thread. While Photoshop techniques abound they do contribute to the authenticity of mystical powers on display here and serve the story well. While the character’s body language does feel a bit stiff at times, it’s difficult to take issue with any of the book’s artistic choices. In fact, the best thing that can be said is that it serves the story that the creators are endeavoring to tell, and what more can you ask from sequential storytelling?

At the top, I mentioned the book’s possible underlying fetishes, and that should probably be revisited. It’s difficult to approach this book without at least addressing how tattoos and their cultural significance became the focal point of a book with an empowered and almost entirely female cast. I have no issue with not making inferences as to why this is so, and can chalk it up to a benign creative decision. In part, it can be viewed as imbuing one-time pariahs (solely due to their decisions to ink their flesh) with immense power. In fact, the point can be made that in this story the tattoo chooses them based on their skills and talents versus the other way around. On the other hand, it’s just an excuse to see stylish girls with tattoos doing cool magic stuff. I choose to believe the former as the closing pages feature the cover for the next issue where Mavin is featured in an often-parodied Rosie the Riveter pose. “The Marked” might be slyly having its cake and eating it too in terms of its glorification of body art. After all, tattoos ARE cool again. Why fight it?

Final Verdict: 7.0 – “The Marked” #1 that might have had more to say if it dwelled on how science and magic are at cross purposes, but it’s a fun premiere issue as long as you don’t think about it too much. In fact… nope, I’m done.