Walter Simonson took control of the “Thor” title in the early ’80s. He had been working for the major comics publishers for years by then, dipping in and out of various properties like “Jack Kirby’s Fourth World,” the “Alien” adaptation, and the original Marvel “Star Wars” comics. He contributed covers to a wide range of high-profile titles. He was definitely a known entity, but it was his work here, on “The Mighty Thor,” that launched him into the stratosphere. Simonson wrote and illustrated “The Mighty Thor” from #337 through #367, and wrote the title until #382. During that time, he wove this long, intricate, and all around epic storyline. He pushed heavily into the fantastical regions of the Marvel universe. It’s a staggering run, a classic of superhero comics, and a perfect book to get lost in during the waning summer months. 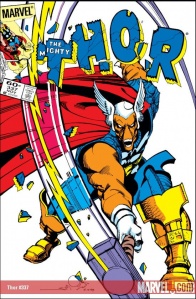 There’s something about early-to-mid ’80s comics that simply hasn’t been matched. It’s in the scope and scale of the things. While the Comics Code Authority remained in full effect, its influence had already weakened considerably and publishers allowed their creators to get bolder, more brazen, with their narratives. So you have the Claremont X-Men stuff. The New Teen Titans stuff. “Crisis on Infinite Earths.” It’s that time between the Serious Important Social Issues from the ’70s and the grim, dark edgelord work from the likes of Frank Miller and Alan Moore, which superhero comics continue struggling to escape from. There were huge overarching stories but each and every issue carried an immense amount of narrative weight. Each segment could almost stand on its own, with a set of motivations for the characters and plot to be resolved. Walter Simonson’s “The Mighty Thor” fits firmly in this category. It does for epic fantasy (because “The Mighty Thor,” despite its interstellar travel and the alien Beta Ray Bill is very much an epic fantasy) what Jack Kirby did for science fiction.

Above all else, “The Mighty Thor” taps into what makes superhero comics so appealing: it’s a lot of fun. The emotions are as huge as the visuals. The characters are melodramatic, larger than life, yet never far beyond what makes them enduring. The colors are so bright and vibrant and primary. The book travels into the far reaches of space with imagination and confidence.

Simonson tackles a overall complex narrative but the plot of “The Mighty Thor’s” opening arc is simple enough: Thor is summoned by Sgt. Nick Fury to investigate this weird energy surge somewhere in the far reaches of space. Thor, ever arrogant and overly-assured, arrives to find Beta Ray Bill, a horse-faced alien also worthy to wield Mjölnir. The mystery broadens. Simonson realized early on that Thor’s at his most interesting when he’s being humbled. Here we have the almighty God of Thunder, frequently saving millions, basking in his glorious responsibilities. He might have a cool costume, he might have outstanding powers, he might be directly linked to the Asgardian throne, he might have a goofy alter-ego, but reveling in those qualities makes for boring reading. Sure enough, Thor surges forward toward the problem with Beta Ray Bill with arrogance and gusto, only to quickly find himself wiped over the floor. That, and Beta Ray Bill is a wonderful addition, with a heartbreaking and inspiring backstory. Before Simonson reveals more of Beta Ray Bill’s backstory, you’re kind of bummed that he’s seemingly this bad guy.

Simonson embraces the cosmic. The art is huge and loud and outstanding. Panels are often enormous, filled with dynamic movement and grand postures. I dig how he draws objects humming with power, these halos with lightning bolts shooting out of them. His compositions lean toward finding the biggest, most grandstanding impact. You feel each hammer fall, the frames shake with its thunderous blows. Steve Oliff pushes the saturation levels up as high as comics painting could allow. (Though my edition were the remastered colors, which I’m sure were assisted with computerized coloring.) John Workman and Simonson place each bubble and narrative box so strategically, they blend into the art like they had been drawn on the page first. Comics at the time had a tendency to over-narrate, like they needed to prove what they were doing wasn’t simply pulpy trash or something. Certainly, “The Mighty Thor” is guilty of that, with a few instances of Thor literally telling us what he’s doing or thinking next. Yet Workman’s balloon and narration box placement keep us from getting too distracted by the narrative repetitions.

Simonson’s long-form storytelling is influential and maybe even medium-shaking. He’s not afraid to introduce elements in the first pages of an issue that won’t pay off until several arcs later. The sheer amount of elements he throws up into the air, the plot and character questions he poses toward the reader, is staggering in its own right. Most impressive of all is his patience and, like, tact in resolving these elements. Surtur appears in the opening pages, hammering away with operatic fury. Hela and Loki and Malekith might get a panel here or there, enough to tease us but never too long to distract us from the issue with Beta Ray Bill. Balder’s arc starts to gain momentum, one that won’t be addressed for several years’ worth of superhero comicksing. This influence carries through the superhero medium altogether. You see it in these long-form stories creators are sometimes allowed to tackle. You see it in the biggest movie franchise today. It may have been a storytelling element already in place long before Simonson, but his approach to it, his refinement of it, is something special.

This first arc of “The Mighty Thor” sets the stage for Walter Simonson’s Thor run with assurance and tenacity. It’s one of those rare, ultra-long-form stories that mainstream, corporately-owned superhero publishers tend to shy away from. It works because it never loses sight of what makes a superhero comic so enduring and affecting. Simonson understood what kind of story he was telling, threw in all these other elements, and created a classic.