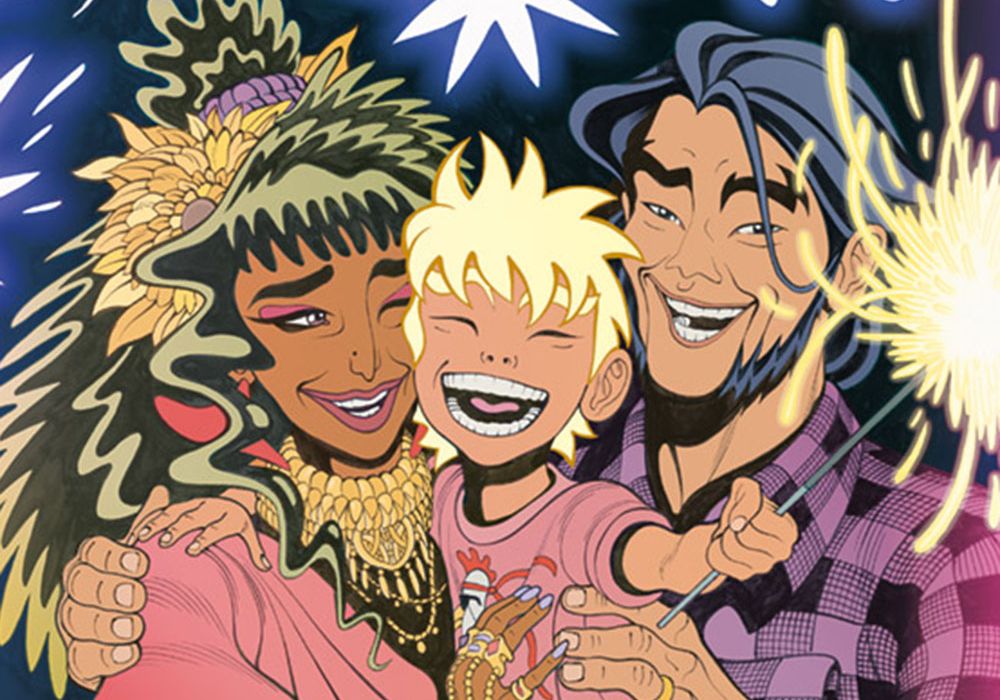 The premier issue of “The New World” was a whirlwind of ideas and kaleidoscopic colors, presenting a unique future world not appearing in the usual dystopian playbook. I found it dazzling. Aleš Kot’s scripting and Tradd Moore’s clean artwork made for a future imagined by Stanley Kubrick and decorated by Willy Wonka. Most second issues suffer a bit in the shadow of the world building of a creator-owned project’s first issue. Sometimes they can feel like marking time in an effort to present multiple facets of the story’s central conflict. This second issue of “The New World” has an even steeper hill to climb. Not only was the first issue wildly inventive, but it also clocked in at a whopping 64 pages. How could issue #2 help but look pale by comparison, right? 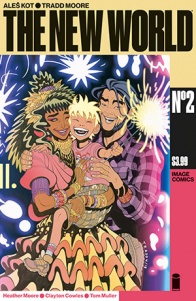 On the run, but not the way you might think. Unless… you guessed.

There’s a look to Moore’s artwork that recalls images by the great New York caricaturist Al Hirschfeld. Once I made the connection, which I know I’m not the first to make, my eyes couldn’t help but see The Line King’s style underlying the adventures of Kirby and Stella. The characters in “The New World” seem to move with a Broadway hoofer’s grace even as mayhem ensues. The corners of mouths curl and hair corkscrews into ribbons not occurring in nature, and yet somehow the figures seem more alive than those in the work of many accomplished draftspeople who perfectly capture human physiology. Moore’s linework is so bold and confident that readers believe his characters are real. It’s a subjective thing, of course, preferring this hyper-real style, but when paired with Heather Moore’s coloring, this surreal, candy-coated aesthetic is like a fun house mirror, reflecting back to the reader a warped vision of a possible (and very psychedelic) future. Moore’s work reminds you what makes comics so special and why work like this continues to be so important in the gap between the adventures of barrel-chested rock ’em sock ’em superheroes and slice-of-life navel-gazing indie comics.

Building a future world the likes of which I haven’t seen in comics, Kot and Moore pepper their re-imagined landscape with familiar totems from our present day: muscle cars, motels, and SWAT teams and filter it through a Yellow Submarine prism. The page designs are kinetic and cinematic, and the best praise for Kot’s scripting is that he knows how to lean on his artistic partners to make the story more effective. In this issue, the inevitable happens very quickly. The pairing of Stella and Kirby may almost seem like too sudden of a development after a one night stand, but the guardian who refuses to kill and the techno anarchist have more in common than they realize. The match is one where the readers understand why it’s perfect before the characters involved, and the way that Kot presents the star-crossed lovers conceit is fresh and invigorating. Kirby’s burned-out hippie father with a secret past knows the score though and sees through Stella’s armored veneer rapidly. His character’s arc is sure to yield surprises.

“The New World” seems to be all about surprises, but at its most basic level, the storytelling premise is not revelatory. We’ve seen two people buck the system before in literary and cinematic futuristic worlds with varying success. In this case, we don’t quite know what we’re rooting for to happen as we’ve only seen a pocket of this future version of the United States. How far-flung the narrative will be is anyone’s guess. Is the system one that needs to be fixed? Is this a cautionary tale about the dangers of totalitarianism no matter how benevolent? On the surface, New California appears to be a semi-utopian society albeit with a dark bureaucratic underbelly and a very hands-on autocratic leader whose name evokes a vain and villainous Biblical monarch with a penchant for infanticide or at the very least one of his heirs who played a role in the deaths of John the Baptist and Jesus of Nazareth. In other words, it’s a name that carries some dramatic weight.

At this point, Moore’s artwork is worth the price of admission. If Kot can present the story in a way that gives readers something that they haven’t seen before even if it’s wrapped in a familiar narrative package, the series will be all the richer for it. I look forward to seeing how the story develops in subsequent issues. There is a breakneck pace that has been established in the early going which should serve the series well because at this stage the plan for the series appears to be particularly audacious. There’s so much going on underneath the central arc that could be addressed. The trick will be to develop a satisfying and clear central plot in this world that’s busting at the seams with narrative and artistic detail without losing the flavor that those meticulous details provide.

Final Verdict: 8.0 – While it is a bit of a letdown after the dizzyingly inventive first issue, it is only by the smallest of degrees as the storytelling tension builds very quickly in this follow-up issue. This is a series to watch.