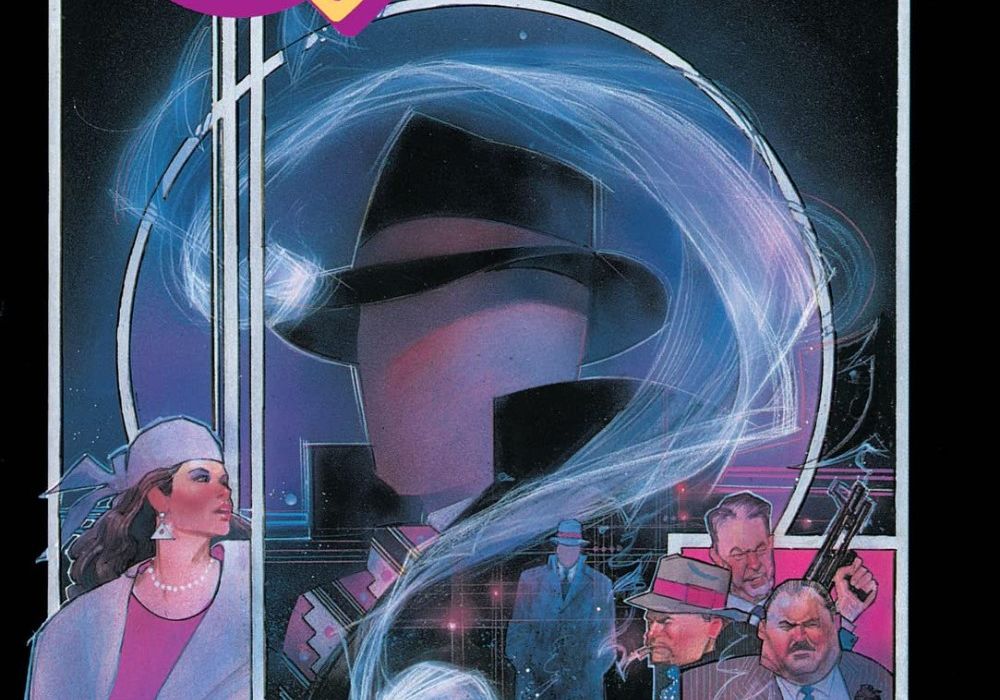 Hub City. A cesspool of crime. Filled with all the characters you’d expect. A corrupt, alcoholic mayor. An even more corrupt, uncaring police force. A deacon with delusions of grandeur. And then there’s our hero. A reporter who tells the truth, no bullshit. Sharp as a whip. An asshole to the tenth degree, with hubris and a penchant for violence to match.

Welcome to the world of The Question. You ready to get your trench coat covered in dirt, sweat and blood? Spoilers ahead 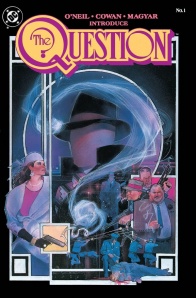 Vic Sage, a.k.a. The Question, is savagely beaten and shot for investigating the corrupt mayor of Hub City!

The Question is an odd duck of a hero, with a very odd publishing history. Created by Steve Ditko as a back-up character for his very short lived iteration of “Blue Beetle,” and used only once outside of that run in a one-shot, The Question had very little in the way of caché when DC Comics picked up the publishing rights to Charlton Comics’s characters. That didn’t stop them from getting every last drop out of the acquisition, however, so in addition to a new series featuring Ted Kord, the Blue Beetle himself, DC launched “The Question,” which proceeded to outlive its originator’s first DC run by a good 12 issues.

He then lived out the rest of his comics life as a side-character, with the occasional mini, before passing the mantle onto Renee Montoya in “52,” never to be seen again. What’s that? No. We don’t talk about his New 52 incarnation. Hmm? I dunno what’s going on in “Action Comics” and “Event Leviathan,” Bendis hasn’t done enough yet. Anyway. . .despite this lack of presence, he remains a recognizable part of the DC Universe, so much so that he was a central character in the early-2000s animated Justice League Unlimited.

Personally, I’ve been a big fan of The Question as a character, both Vic & Renee, ever since I read “52.” That was a story for detectives and B, C and D list heroes and made them all #1 in my book. Because of this, once I could track down the issues, I thought I’d hop back to his first DC series and see what made him stick in the minds of these creators that they’d resurrect his identity in a new generation. Fair warning, for those who only know Vic’s version through “52,” this series will be a bucket of cold water to the face. 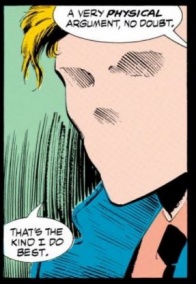 Issue #1 introduces us to Victor Sage and the world he inhabits and it is not a positive one. Like many movies and TV set in cities in the 80s, this is a place of grit, grime, corruption, and blight: a city on the brink of collapse. Our hero reflects this. Victor Sage is an grade-A asshole. Full of himself and haughty, he’s brash, mean, and barely able to hold back his seeming love of violence. It’s never gleeful but you get the sense that he doesn’t try very hard to restrain himself. He is shown doing good, like helping a homeless man from being harangued by the police, but he’s surly throughout and the confrontation ends in him escalating the violence. He’s an investigative reporter and lays it on thick and brutal.

He is of the city, and the city is of him. Good is covered in dirt and bad is squeaky clean.

It’s hard to say whether or not his characterization in issue one is meant to channel The Question’s time at Charlton and to comment on Ditko’s choice to make him an objectivist, having not read those issues. Regardless, O’Neil makes it a point to show why Sage is the hero of the story without papering over his rough qualities and, in some places, enhancing those qualities. This way, when he gets his ass royally handed to him at the end of “The Question” #1, and left for dead at the bottom of the river, there’s a small sense of satisfaction mixed in with the despair felt by losing the last “good” person in Hub City.

Oh, did I not mention that Victor Sage dies? Whoops.

This death, and his subsequent rebirth, sets the stage for who Vic would become. Symbolically and literally building a new self, over the course of the next three issues, he changes from the Grade-A asshole of issue #1 to the Grade-C asshole of issue #4. Under the watchful eye of then-Batman editor Denny O’Neil, these four issues bring us through his transformation into a practitioner of Zen, though not of the Buddhist variety, sharpening him into the hero he thought he was.

At the heart of “The Question” #1-4 is a discussion of philosophy, city politics and the question of violence. Reading these today, there are aspects that are very dated in an uncomfortable way, such as the shorthand accents and, well, the white guy learning Zen from another white guy, while others are dated in a way that grounds them of the time, such as how the series conceptualizes and discusses the problems of an ailing city. There are also aspects that still ring true, most notably through the characters of The Deacon, who represents religion used as an excuse to do evil, twisted into fanaticism, and Mayor Wesley Fermin, a leader more concerned with being in power than the office that he holds. 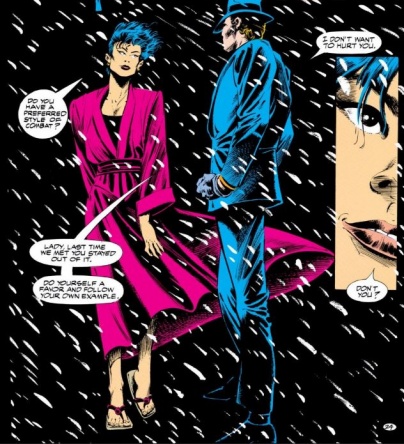 It’s a rather effective first arc and I haven’t even talked about Denys Cowan’s gorgeous art, Rick Magyar’s clean inks or Tatjana Wood’s striking colors. The best pages to illustrate how damn well this creative team works together are pages 24-25 in “The Question” #1. It takes place in the snow at night, so the background is pure black except for the flakes of snow swirling around Lady Shiva and The Question. The panels at the top borderless, which could lead to confusion on the page were it not for them flipping the direction of the snow in those panels. The Question’s blue suit and Lady Shiva’s bright pink coat stand out all the more against this backdrop, which helps keep the fight on page 25 clear.

A lot happens over the course of these four issues, most of which I’ve chosen to not talk about so you can experience it yourself and also because I find the events less important than the themes at play, and the pages reflect that with a high number of panels per page and plenty of dialog to keep the discussions lively without ever sacrificing clarity. These pages flow, thanks to Gaspar’s lettering tying it all together, and Cowyn’s knowledge of when to take risks with the layout and when to keep it simple. It’s a tight introductory arc that lays the groundwork for characters to come, for situations to build, and for the recreation of a flawed hero.

What’s up next for The Question? You’ll just have to stick around to find out.