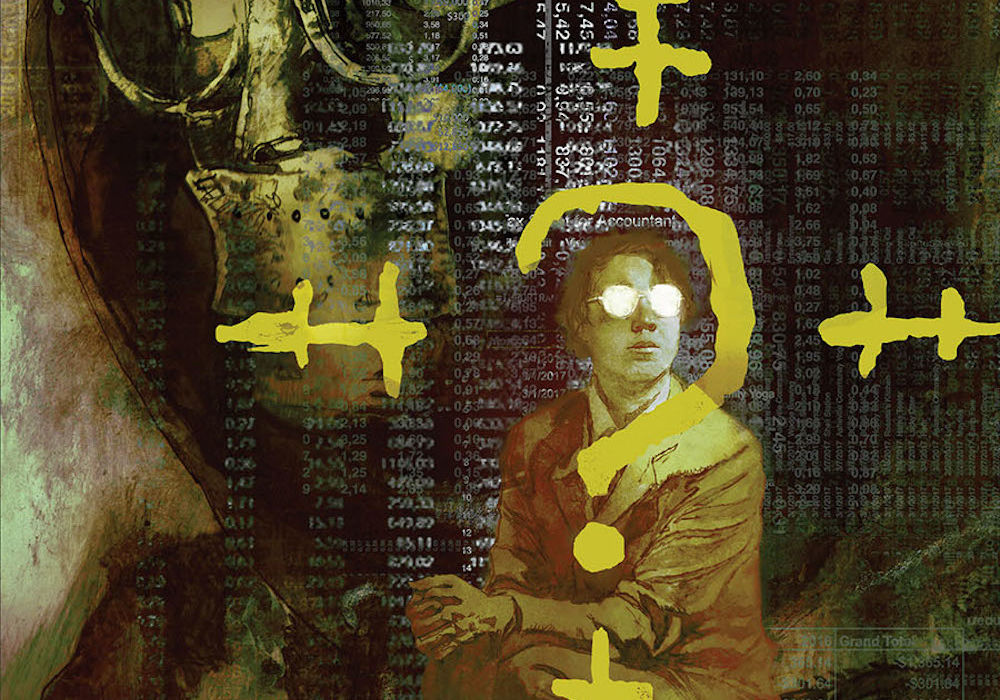 The actor for the villain of The Batman tries his hand at writing his character’s origin story in “The Riddler: Year One” #1! 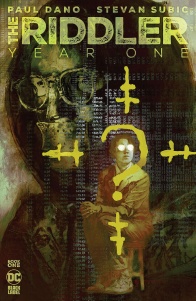 As depicted in Matt Reeves’s hit movie The Batman, the Riddler wasn’t simply an amusing eccentric with an affinity for wordplay and baffling clues, but as terrifying a villain as any in the annals of the Dark Knight. Here you can see Edward Nashton evolve into the menace known as the Riddler. How did an unknown forensic accountant uncover the dark secrets of Gotham’s underworld and come so close to bringing down the entire city? This six-issue miniseries is an immediate prequel to The Batman—the detailed, disturbing, and at times shocking story of a man with nothing to lose.

Artist Stevan Subic makes his American comics debut, including a variant cover that is the first of six interlocking covers. This collaboration with Dano delivers a shadowy and gritty tale of a society’s forgotten man who refuses to go unnoticed any longer. Subic’s recent Conan the Cimmerian for French publisher Glenat has brought him great acclaim in Europe, and he’s about to break out globally with a Batman series unlike any you’ve seen before.

Writing the origin story for a villain can be an extremely difficult line to walk. On the one hand, there is the problem of being too positive toward the villain, making them out to not be a bad person at all, potentially making their crimes, heinous as they may be, out to be justified. This kind of approach has the danger of giving a message that the actions of the villain are endorsed by the text, or even celebrated for readers to emulate. On the other hand, there is the problem of going too far into the negative: treating the villain as so irredeemable that the very act of reading can be disgusting. On this end, readers may be alienated from even finishing a work. How does Paul Dano, the actor who played Edward Nashton, better known as “the Riddler,” in the 2022 feature film The Batman, walk this tightrope in beginning on his character’s origin story, writing it in “The Riddler: Year One” #1?

In general, Dano balances the different elements of a villain origin rather well. Nashton is somewhat pathetic and pitiful, and therefore has some elements of sympathy, with his desire to be promoted or recognized for his work at all being a rationale the audience can relate to. He idolizes Batman as a man of the people who tries to help people, much like many a reader might as well. He is called the “rain man,” a highly insulting nickname associated with high-functioning, neurodivergent persons, and hates it, regardless of speaker intent. The people he sees on a daily basis are not particularly nice or considerate of him (with some minor exceptions).

However, it is there that the sympathy stops. Though Dano’s emergent Riddler is in a bad spot, his desire for recognition seems to supplant his ability or willingness to work within a team for higher authorities in his company. Even before seeing what appears to be evidence of corruption, he was internally complaining about not being recognized as the sole person who solved a problem. Rather than wait for a day of work, he stalks his employer to talk to him about work at a bar, an action he himself admits was a horrible idea after the fact. Rather than take positive steps, Nashton takes refuge within online forums that celebrate Batman’s violence, rather than any positive symbol he may have as potential, some outright noting their intention to act as vigilantes themselves with firearms. In general, despite him being more sympathetic than his original comic incarnations on the surface, Dano makes absolutely certain that if readers strip away the internalized reasons the character may espouse, he is still a person on the road to becoming a budding serial killer and terrorist, one they should not take as their inspiration, but as a cautionary tale at best.

Complementing the masterful writing is Stevan Subic’s artistry. New to DC Comics, let alone American comic books in general, Subic gives life to this gritty take on Gotham City with exceptional expertise, to the point that he could be confused for someone who has been drawing this universe into the mainline comics for years. On a surface level, Subic is, for the most part, just drawing these characters as more or less realistic images, soft lines and quick motion. However, the truth runs deeper, much like Nashton’s psyche. Imagery such as the protagonist kneeling before two criminals on a street brings to mind the iconic image of the pre-teen Bruce Wayne and his parents after their murder, but with a disturbing feeling of hope rather than despair. A relative Dutch angle when viewing Batman emphasizes him as larger-than-life to Nashton, even as he finds it hard to explain his feelings in words. Overall, the general feeling is one of erratic emotions masked with a resemblance of stability, as well as copious irony in how different Edward Nashton is from his idol’s secret identity. Other scenes, such as the protagonist performing some rather disturbing behaviors in an alley, are all the more uncanny and deranged by how normal much of the rest of the story appears, albeit through a pseudo-noir lens much like the film took in earnest.

Subic also provides the colors for “The Riddler: Year One” #1, which mesh very well with his pencils and inks. The general color palette appears a bit light, as if deliberately contrasting against the darkness of much of The Batman, with the result helping the contrast between the stories. While Batman faces the darkness head on, Nashton seems to hide from it, with even scenes with Batman seeming to be well lit with Nashton around, also emphasizing the latter’s intrusion into lives that is paradoxically ignored by others.

The colors are best shown in the final moments, with them driving into a much more volatile variety. In the process, Subic has the story figuratively break wide open, dispensing with Nashton’s enforced calm and beginning his true madness.

Final Verdict: 7.0– Evil has its origins in mundanity with this interesting opening.