Every choice we make can have far-reaching consequences. We can never know whether the choices we make are right until we see how they play out… or can we? In this case, Gene Luen Yang gives “The Terrifics” a new twist as the comic becomes a “Choose Your Own Adventure” story. With all the potential paths, we will inevitably get into some spoiler territory, but let’s take a look and see how it plays out. 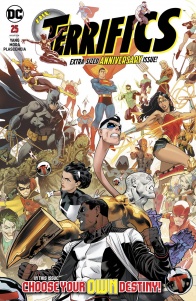 Choose your fate, choose your action, choose your destiny! In this special extra-sized 25th issue, Michael Holt has dis-covered a deadly hidden enemy, and only a series of life-or-death simulations can bring the threat to the forefront! But when Mr. Terrific lies to his team, how can they trust him again? Don’t miss this epic multi-path journey that puts you, the reader, in charge of the story! Pick your ending, but choose wisely! The Terrifics team hangs in the balance!

It’s not unheard of for a comic to do a “Choose Your Own Adventure” issue. We’ve seen it before in “The Unbeatable Squirrel Girl” and in “You Are Deadpool,” to name a few, but that doesn’t make “The Terrifics” any less interesting for it. These sorts of comics can be a fun adventure as long as they’re done well. And this comic does it very well.

The first thing one must consider is the framing device. How can the comic suddenly shift to this narrative style? In the case of “The Terrifics” #25, it’s done via a new T-Sphere, the T-Infinity and its possibilities protocol. This presents the multiple potential timelines based on the decisions you can make.

After reading through every path, I can confidently say that this is a story with far more wrong choices than right ones. Most decisions will get the characters killed within a page until you get on the right path. But one aspect that makes this comic stand out from many other “CYOA” stories is how it ties that into the narrative. In fact, one choice deliberately has only one right choice out of many wrong ones, essentially making it necessary for the readers to try a different route, where they find a clue leading them to the right choice when they try again. This all feeds into the narrative Gene builds towards.

This will be getting into spoilers, but once Mr. Terrific begins remembering the different paths you as a reader took, it adds a new layer onto the story. This changes how we view the decisions the characters make and gives power to the characters to use the narrative structure to their advantage.

At the same time, many of the other choices provide amusing moments that lead into the bad ends. One choice may put you in the path of Harley Quinn and Poison Ivy, while another brings back the Justice League of China (a return I was most happy to see). While these are mostly cameos, it’s still a fun alternate pathway for the characters to take.

Due to the nature of the narrative structure, the story is overall short and self-contained, but still contains the same level of comic book chaos that we’ve come to expect from “The Terrifics.” We get giant tree monsters, a hidden city of Tengu (crow people), and important moral choices.

No matter which way the story goes, the characters remain true to their personalities. Whether it’s Plastic Man turning his head into a megaphone to get the tree monster’s attention or Kenan Kong (the Super-Man of China) not understanding English and acting rashly as a result, everyone maintains clear voices and characteristics throughout. Of course, the readers do get to make important decisions for them, but eventually you’ll find that making the heroic choice is key to a good ending.

Then we get to the art. Illustrator Dan Mora and colorist Ivan Plascencia went all out on this issue, as every page is brimming with action and imagination. We get intense action as the monstrous tree lurches towards the city, followed by a beautiful cityscape filled with Tengu. A wide range of characters can show up, all with distinct designs and solid color choices.

Dan Mora’s artwork is clean, detailed, and strong. The backgrounds feature just enough detail to feel like a solid place without overpowering the characters, while the wider shots are brimming with little details and design choices that bring them to life. It’s got just the right balance of cleanliness and detailing that can really bring a comic to life.

At the same time, Ivan Plascencia’s color work illuminates every moment. The shift in tones from the outside of the tree to the city inside helps change the mood in a subtle but discernible way, particularly with the change in lighting from the bright daylight to the soft glow of a dark sky. The way the colors complement each other without sharply contrasting or blending in too much makes each page pleasant on the eyes, no matter where the story takes you.

“The Terrifics” #25 is a comic that’s fun to read whether you’ve been following the series or not (although I highly suggest you do). This is a “Choose Your Own Adventure” comic that uses the narrative device for all that it’s worth, making it a part of the story in a clever way. Writer Gene Luen Yang really gets to show off his creativity and narrative mastery here, making the reader’s failures become a part of the overall story. Throw in the always excellent artwork from Dan Mora and Ivan Plascencia and this comic is well worth the money.

Final Verdict: 8.9 – A very enjoyable “Choose Your Own Adventure” style comic, making full use of the story structure and supported by excellent artwork. Worth reading as a one-shot, part of the ongoing narrative, or as an introduction to “The Terrifics.”