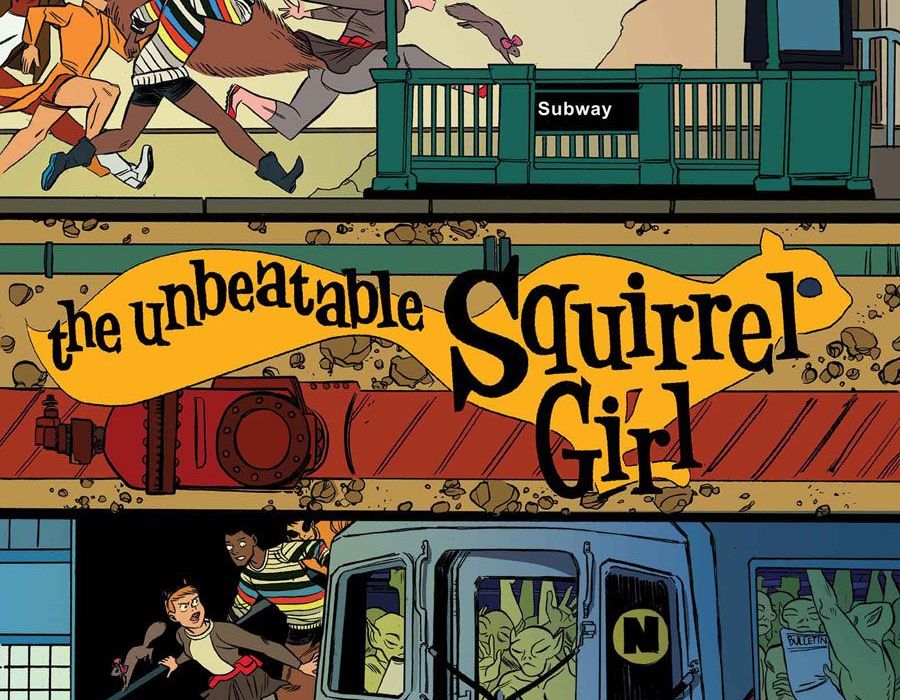 Ladies, have you ever had to deal with a guy who just couldn’t take “no” for an answer? And did that guy ever command an army of subterranean Moloids? (That second part is optional.) That’s what Doreen Green, the unbeatable Squirrel Girl, is facing this month, and it might be her most stubborn foe yet. 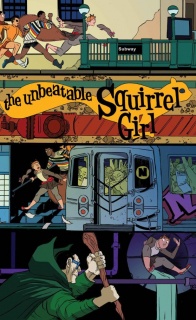 The comic that got TWO #1s in its first year now reaches a new milestone: its very first #9! In Part 2 of “I Kissed A Squirrel And I Liked It,” Squirrel Girl’s date with a chump gets interrupted by MOLE MAN, who is a man who lives underground and can’t see that well! Hence the name!! Squirrel Girl is really good at empathizing with bad guys and talking them down, but what happens when she’s TOO good at that?

Last month’s issue of “Squirrel Girl” had Doreen embark on several failed attempts at dates, thankfully interrupted by a Mole Man invasion. Speaking of Mole Man, did you know that he’s over 100 years old? (In-story, that is.) Ryan North remembers, and has fun bringing back old fashioned slang and vocabulary to give Mole Man a more unique style of speaking, and more personality than we normally see from him.

In fact, there’s one particularly entertaining scene where Mole Man narrates a flashback, and the art style changes completely (from Erica Henderson to David Malki), taking on the form of old timey pictures and postcards. It’s a sudden but hilarious shift, while at the same time drawn with an impressive amount of detail, and faded single colors that make each panel look like an old photograph.

The rest of the issue features Erica Henderson’s artwork, which has been criticized by some for being rather cartoonish, but I have to say: so? It’s a cartoonish comic; it doesn’t take itself seriously, it’s about a girl with squirrel powers who beats up villains with a combination of brains, brawn, and an army of squirrels at her beck and call. The artwork matches the comic’s tone and style nicely, and that’s not to say it doesn’t work well on its own. There’s some great scenes that take up a good portion of the page, showing Squirrel Girl in the middle of combat, or showcasing Mole Man’s latest sinkhole-related crimes, and the vibrant colors (made possible thanks to Rico Renzi) make it very vibrant.

Still, what really makes “The Unbeatable Squirrel Girl” shine is the quality of Ryan North’s writing. The pacing is fast, the lines are witty, and the characters all have very strong voices (such as the aforementioned Mole Man’s antiquated vocabulary). Even the one-note humorous characters, such as Doreen’s absolutely-not-boyfriend Brad (who is thoroughly convinced that super heroes are all a big conspiracy) are entertaining to read.

Personally, I always get a kick out of the little asides at the bottom of each page. The humorous little witticisms add a nice bit of flavor to the comic, similar to how Squirrel Girl’s squirrels used to have their own fourth wall-breaking aside panels.

Squirrel Girl herself is perhaps at her best this issue, not in regards to combat, but as her character. Sure, she could easily beat Mole Man with pure physical strength (and wave after wave of attacking squirrels), but instead she chooses to empathize, talk to him, and convince him that there are solutions to his problems that don’t involve invading the surface world.

Sure, that eventually comes back to bite her, which means the next issue will involve much more in the way of butt-kicking, but seeing a hero who’s willing to say “I didn’t mean to screw you over, and I’m sorry” is a refreshing aversion to a typical “bad guy shows up, hero beats bad guy regardless of why the bad guy is even there” story.

Considering the rest of the Marvel universe is getting ready for another Civil War, seeing a hero who’s actually willing to talk first and fight later (rather than the other way around) is quite refreshing. She’s willing to acknowledge a villain’s views and his lived experiences, something rarely seen these days.

Of course, just as beating up a supervillain is hardly a permanent solution, trying to talk to someone as mentally long gone as Mole Man will only work for so long, and Squirrel Girl has to deal with a guy who not only can’t get the hint that she’s not interested, but can command an army of Moloids to attack her friends or sink a city if he’s upset.

Final Verdict: 8.2 – clever, entertaining, and not at all serious. A good bit of entertainment for those looking for some light comic reading, with strong and likable characters.