After an intensely action-oriented sequence earlier, “The Walking Dead” shows a heart-wrenching end to a beloved character. 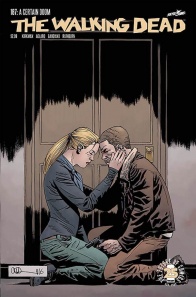 “A CERTAIN DOOM” Is it possible, could it be, that the inevitable can somehow be… avoided? Rick and Andrea have a tough decision to make.

As ever, the solicitation of this issue is somewhat misleading. Death is inevitable; it is a part of life. That does not make it any less distressing. Talking about this issue in any depth would be impossible without mentioning the fact that it includes a death of a major character.

In contrast to his portrayal of the rather nonsensical actions of Sherry in the preceding issue, Robert Kirkman’s characterizations in this one seem far more based in common sense and reality. With the coming death of one of the most prominent members of the series, this issue is far more about mourning than it is about killing. The sheer number of characters that come to give their final words is enough to bring a tear to even some of the more cynical readers’ eyes, and said nearly-dead person’s defiance of any tears or guilt-throwing makes the end all the more painful to watch.

One of the key elements in this death was the fact of it being one of relative peace, in a bed and surrounded by loved ones. The end is sad, but times have progressed to such a degree that Rick Grimes’ new society allows for dying in such an atmosphere of love, rather than the fear of being devoured alone or shot dead on a battlefield. As such, while the death is tragic, it also shows how far society has come in the years since the start of the Walker outbreak.

On the other hand, this issue shows something else: while many a character may survive for a long time, nobody lives forever. Even the Alexandria group, trained as it is, can fall into disrepair and ruin given enough time. As the victim says, people individually aren’t special at all. It’s the relationships they make that matter, and that is shown true in no place better in “The Walking Dead” than this one issue.

Key to this situation is the fact of what it says about death in and of itself. In essence, it can’t be stopped, no matter what anyone thinks. Even if people turned to the Walkers, the undead, that’s not living, nor even surviving. It’s a bitter pill to swallow, but it gives the impression that people have to go on with their lives, that it’s what their deceased loved ones would have wanted fro them to do, no matter how much it hurt.

Robert Kirkman is not always on top of creating meaningful characters that we care for dying, in part due to the fact that deaths and injuries in the series are random as they come, especially in contrast to the need for different production values in the television adaptation. However, occasionally he can create one that people really feel to their core and to whom, on some level, they can relate. While it often leads to cynical readers simply not caring, this case was not one of those.

So potent was the death that the issue also lacks the usual letter-to-the-editor “Letter Hacks” section, instead having a eulogy to the important death. This is not an occurrence that seems to have happened in the past, and is unlikely to happen again for nearly any other person.

Writing about coloring in relation to the artwork on “The Walking Dead” is very difficult, in no small part due to the fact that it is actually a black-and-white comic, the covers notwithstanding. Regardless, the close-ups of faces throughout thei issue seems to be a visual highlight, one that can be equally placed on penciler Charlie Adlard, inker Stefano Gaudiano, and creator of “gray tones” Cliff Rathburn. The sweat on the victim’s head gives an impression of the fever, the anguish in the eyes of those close to the victim extremely apparent. At times, it seems as though it is unclear whether or not the person has passed on and become one of the undead themselves, due to a clever use of perspective avoiding the eyes combined with Kirkman’s dialogue of them moaning in pain.

One panel in particular stands out: when the victim, nearly passed out from the fever, sits up quickly, and screams at someone to get on with their life. With the majority of the issue being quiet, this moment, with a close-up of the sweaty, screaming, spewing face is enough to make a less cautious reader jump in surprise, and thereby take into account what is being said all the more readily.

After the majority of the Whisperer War was relatively uneventful, this issue is a sobering reminder of how terrible the world of “The Walking Dead” is, but at the same time how it has grown and developed thanks to our protagonists’ ingenuity and communal systems.

Final Verdict: 8.0 – In spite of the sheer quantity of death that occurs in this series, Robert Kirkman manages to create a slow-burn demise that can easily bring tears to the eyes of fans.