Everyone’s favorite superfan that knows more than you do gets a little caught up in herself and crosses the streams so many times you’ll be able to weave a basket when this issue is done. The tongue-in-cheek humor gets a little too smart for its own good, but our girl finally shows some personal development. 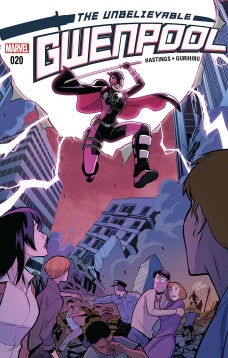 Our magenta mercenary and Spider-Man were having a little parlay in our last issue that got interrupted…by Gwenpool! Actually, her evil twin: Future Gwenpool. Future Gwenpool has bad long term memory, so Current Gwenpool tries to manipulate the timeline to get her bad side out of her way. Future Gwenpool is pretty darn smart though, and tries to convince her current self that she can’t change the future; the dark side is her destiny. Besides, it might even be fun! Now Current Gwenpool knows better….she knows all good superheroes have to find true purpose. But does this come with a price?

I fell in love with Gwen Poole and her alter ego while on a summer road trip, binging the first 10 issues on my iPad during a rather painful traffic jam in the Washington, DC area. Once I got to my final destination, I proceeded to clear out one of the comic shops in the area of whatever I could not get on Marvel Unlimited. (Sorry to any Gwenpool fans in the Columbia, SC metropolitan area.) I loved the wink-wink nudge-nudge aspect of the story – a comic book fangirl caught in the comic book world who breaks the fourth wall with wild abandon – and her Deadpool-esque sense of humor kept me laughing. No doubt there’s inspiration to the Merc with a Mouth throughout – and not just in the similar names.

This particular issue does collapse a little bit on itself with the two Gwenpools dueling each other (and poor Miles Morales caught in the crossfire) – the trope of the literal manifestation of inner demons and the conquest of same is as old as time eternal. If this was a movie, the action would be paused and you’d hear that infamous record scratch followed by some variation of “you’re probably wondering how I got caught in this situation…” It’s a mix of flashback and changing history that does dip toes precariously into the Steven Moffatt School of Writing mantra of “be so clever because you can” – remember that when done too often, this leaves readers bored, confused — sometimes both.  Christopher Hastings does know when to pull back, and he balances breaking that fourth wall with plot movement. It’s a balance I’ve seen in every “Gwenpool” issue from the start, and I applaud his momentum and commitment to a seesaw that can easily tip to one side if careless. And yet, the fourth wall does get broken one time too many in this issue in writing; you start to feel like you’re being hit over the head with the “Gwenpool! She knows everything about everyone else that they don’t!” dialogue one time too many.

Writing aside, the art in this issue, like all others, is a joy to behold. I’m so pleased to see a comic book heroine that identifies as female not drawn as a sex symbol. Gwen is appropriately attired for superhero work; no breasts bulging out of a too small super suit or inappropriate footwear (stiletto boots be gone!) that would seem to make action shots logically implausible. Future Gwenpool, clad in black (so we can tell the two apart, naturally), even has pants – something Current Gwen has demanded time and again. Perhaps that’s what initially attracts Current Gwen to the dark side…not cookies, but a good pair of trousers? Character flaws aside (Gwen Poole did drop out of high school – slight aside, stay in school kids), we have a comic book heroine for tweens and teens who looks and acts like a real girl, instead of a fetish. The entire issue is bathed in variations of pink so much that, with apologies to the play and film Steel Magnolias, looks like it’s been hosed down with Pepto-Bismol. Not only is it Gwen’s signature color, but somewhat symbolic of the internal personality battle dominant in this issue. After her evil side gets erased to history (literally), the final pages bring us back to the real world, with all its variations in color.

Clayton Cowles is having fun with his lettering and layout, emphasizing that Gwen knows more about her world that those in it. During moments when Gwen Squared break that fourth wall, they literally break out of the comic. They take up whole pages while walking on a carpet of comic panels, with other pages floating around them in the air. A moment when Gwenpool is reminded she can’t kill Spiderman bursts forth in a magenta tornado of pages, lettering so large it would hit her in the head if it fell over, an illustrated “DUH THIS CAN’T HAPPEN” moment. All this adds to the idea that Gwenpool is in the comic world, but not truly of it. I’m still not sold on the perpetual use of pink word bubbles for Gwen – we get it, she likes pink, and there’s a certain innocence to the color pink and Gwenpool herself. However, this is not enhancing the plot (and hasn’t been), especially with two Gwenpools in this issue. If anything should be retired from canon, this should be it. The colored word bubbles work when conveying a distinct, different voice from the character, such as Miles Morales battling his “demonic GPS voice” in his head.

Having a comic that breaks the fourth wall, like Deadpool and Gwenpool is no easy story to write or draw. Creators run the risk of overusing the gimmick, or sacrificing it for story and denying fans what piqued the initial interest. “The Unbelievable Gwenpool” continues on the right path, but a few too many self-aware bumps within the writing started to tip that seesaw towards the gimmick.  The art and letters really bring home the tongue-in-cheek style of the comic – it’s time to let that come through more, and use the writing to move the story.

Final Verdict:  7.5 – The wink-wink nudge-nudge joke can wear thin 20 issues in (especially in writing), but a hefty dose of self-actualization on the part of our heroine keeps plot moving.