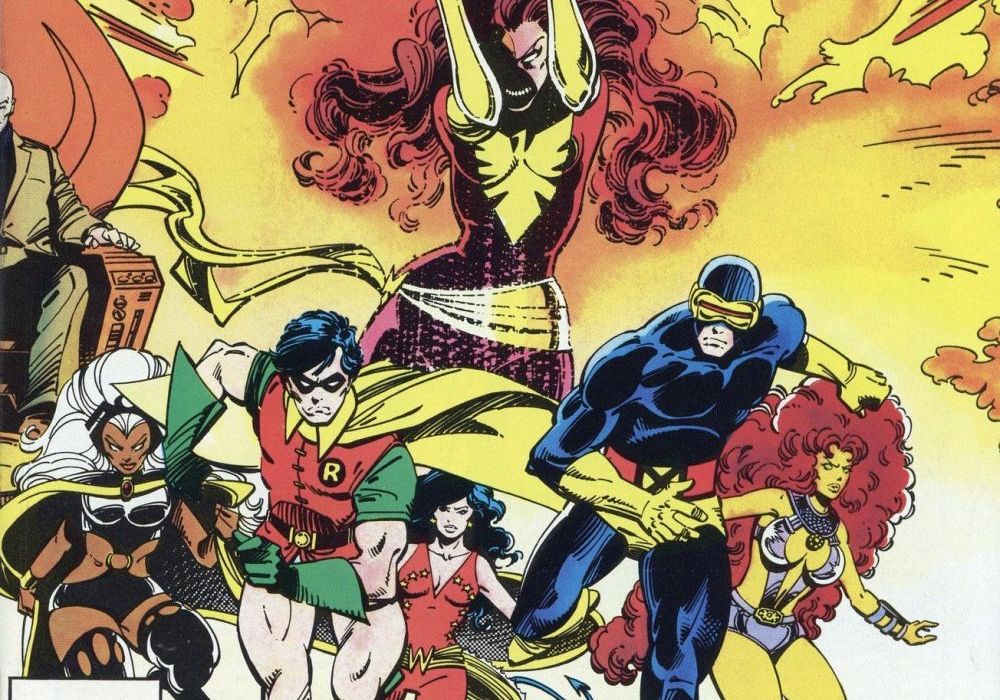 This is a perfect superhero comic.

I’ll grant you the distinct probability other single-issue superhero comics, either before this one’s release in August 1982 or afterwards, are as good. But nothing beats “Marvel and DC Present The Uncanny X-Men and The New Teen Titans” as a perfect optic blast (or starbolt) of story, character, creators, and publishing. For me, ‘Apokalips . . . Now!’ is as good as it gets, kids. Here’s why. 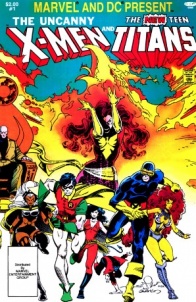 Marvel and DC Presents featuring The Uncanny X-Men and The New Teen Titans in “Apokalips . . . Now!”

It’s worth stating for the record that I’m more an X-Men fan than a Titans one. I like the Titans (in no small part because of this very comic), but my frame of reference is more X-based. And for all its co-headlining, ‘Apokalips . . . Now!’ is very much a part (albeit an out-of-continuity one) of Marvel’s ongoing X-Men saga rather than DC’s New Teen Titans. Which makes sense given: (1) the large cast vs limited page count requiring a tight story focus, (2) the X-centric creative team, with one notable exception, and (3) “X-Men” being the better book at the time.

Before you start grabbing pitchforks and torches, let’s look at where both franchises were in 1982.  Originally a Silver Age team of teens, these “New” Teen Titans were finishing off their second year as DC’s hottest book, combining original members Robin, Wonder Girl, and Kid Flash with newcomers Cyborg, Starfire, Raven, and Changeling (though he was originally part of the Doom Patrol). Deathstroke had been introduced and momentum was building, but traitor Terra and their ‘Judas Contract’ storyline peak was still another year or so  in the future.

On the other hand, the Uncanny X-Men, another Silver Age team of heroes, were seven years into their “All-New, All-Different” run of having a few original members overseeing a team of newcomers, and more recently coming off one of the biggest storylines in comics’ history in ‘The Dark Phoenix Saga’. They had more stories under their belt, more time to develop as characters, and more plot points to build the type of story befitting a crossover like this from, which writer Chris Claremont took full advantage of. He ends up crafting a satisfying “Dark Phoenix’ epilogue that could have easily been slotted into his run on the main book . . . if not for Darkseid showing up.

Which almost didn’t happen. Claremont and editor Louise Jones’s inspiration for the story was a ‘Dark Phoenix/Darkseid’ splash page image, but DC wanted them to use regular Titans villain Trigon instead. They resisted on the grounds that, aside from the obvious benefit of using Darkseid over Trigon, the latter’s design was too weird and off-putting. It was regular Titans writer Marv Wolfman who suggested keeping Darkseid and adding Deathstroke as the compromise because (1) he was also a Titans villain, (2) using underlings and proxies was part of Darkseid’s MO from the start, and (3) Deathstroke was really cool. DC agreed, and we finally got to see this:

The plot springing from that image is pretty straightforward. Darkseid’s latest plot of universal domination requires the power of Dark Phoenix, so he enlists Deathstroke to collect residual psychic energy from the X-Men and locations of their past exploits to reconstitute her physical form. This triggers Phoenix-inspired nightmares in the resident Titan-empath Raven and a visit from the pleading ghost of Jean Grey for the X-Men. The Titans take up the case of stopping this incoming menace (after getting some background from alien Starfire), and the X-Men try to figure out how they can help their deceased teammate.

The reason ‘Apokolips . . . Now!’ works so well is its not only greater than the sum of its parts, but those parts are already the best they were for what they could bring to the project.

The source material could not have been better. Both teams sport classic lineups. Darkseid and Kirby’s Fourth World mileu was still somewhat fresh and underused, although Levitz and Giffen’s ‘The Great Darkness Saga’ would also spotlight Darkseid around the time of ‘Apokalips . . . Now!” While this new team of Titans were still finding themselves as a family, these X-Men had already been through death and life together. Darkseid’s plot is as much an invasion into their figurative world of grief over losing Jean Grey as an attack on their literal one, giving the story a resonance few event books ever achieve.

Claremont handles both sides of the crossover equation with equal deftness, surprising since he hadn’t written any of the Distinguished Competition’s characters before this. His Darkseid feels in lock step with Kirby’s both in action and voice, although none of the DC characters completely shake a Claremontian cadence in their speech. One of my favorite bits in the issue, however, is of Kitty Pryde waking from a nightmare to see a silent smiling Darkseid, eyes glowing red, in her darkened bedroom.  There’s no reason to read this as a nod to the following Darkseid line from “Forever People” #3, but I think to think Claremont or someone had it in mind at the time: “But I am the Revelation! The Tiger-Force at the core of all things! When you cry out in your dreams — it is DARKSEID that you see!”.

Though lacking their counterpart’s emotional quotient, the Titans’ scenes show them in fine form. While the X-Men slowly get their bearings, it’s the DC contingent that’s much more proactive in the first half of the issue. Even though Claremont has the Titans instigate the obligatory ‘heroes fighting heroes’ scene, their action is as justified by Starfire’s impulsive nature as it is defused by Robin’s deductive reasoning and solid heroism. This isn’t the comic to show you which team could whup the other in a fight, and it’s telling the comic’s unwieldy title joins the teams with an “and” rather than a “versus”. Claremont and companies know that in real superhero comics, the heroes team up to fight the bad guys.

Plot-wise, ‘Apokalips . . . Now!’ feels like at least twice the comic it actually is, page-wise. But the creators are sympatico with each other and how to tell a good story that such a dense read never feels dense. In fact, this comic moves so fast Wally West would have trouble keeping up. Claremont knows just how much info the reader actually needs, and how much extra textual flourish he can add before the whole enterprise starts to drag. For instance, there’s no longwinded (or even shortwinded) explanation of how these two universes now coexist like they have since Day One. To Claremont, that’s not important to the story we’re all here to read, so they just do. A lesser comic would have that kind of hubris come back to bite it in the ass, but not this one.

Which isn’t to say the writer doesn’t take little opportunities to drop a few continuity callbacks to  his own canon for the close-reading X-fan. One of my favorites is a bit during the final confrontation with Darkseid. Cyborg’s throwaway nickname of “One-Eye” for Cyclops during the battle seems to get a disproportionately harsh response . . . until you remember ‘One-Eye’ was what Thunderbird called him when he was fed up with Cyclop’s constant training regimen. Thunderbird’s defiant attitude towards Cyclops led to him getting killed on this X-team’s first mission back in “Uncanny X-Men” #95. I guess Scott’s still a little touchy about that one.

But what about the art, you ask?

‘Apokolips . . . Now!’ boasts almost the same creative team that brought you the Dark Phoenix saga. Letterer Tom Orzechowski laughs off box after box of Claremontian prose like Superman chomping on deactivated Kryptonite, incorporating it seamlessly into spaces other letterers would fear to tread. Colorist Glynis Wein answers this story’s call for bombast and subtlety with skill and finesse. Be it shadowy nightmare or blazing hellscape, Wein uses the flat palette of the day to great effect and only to the benefit of the linework, never its detriment. Inker Terry Austin works like a magnifying glass to bring every pencilled detail into focus. Although not working with usual pencilmate (and perennial fan pick for all-time-best-X-Men artist) John Byrne on this issue, you won’t see any lack of sympatico style between Austin and this issue’s chosen penciler.

By this time, Byrne was done working with Claremont, off “Uncanny X-Men”, and busy handling “Fantastic Four”, so a complete ‘Dark Phoenix Saga’ reunion was out of the question. But even given his link to the X-Books AND his affinity for all things Kirby and Fourth World, this book was put together by Claremont, Fate, or whomever to be drawn by one man and one man only: Walt Simonson.

Space is at a premium in this comic. 64 pages sounds like a lot, but when you realize how many different aspects there are, all vying for their own chunk of comic page real estate, you quickly see how just making everything fit between the covers is a Herculean task. Then you have to decide what moments get the splash pages and spreads. How many of those can you afford, page-wise? How does spending that amount alter how you tell the story in your remaining pages? How do you keep the 5-, 6-, 7-, 8-panel pages you’re now accruing interesting, with all their necessary captions and word balloons? These are the questions comics artists are constantly being call on to answer.

Leaving aside his all-around skill as a comics artist (already garnering him industry praise for his work with Archie Goodwin on “Manhunter” and the Alien comics adaptation), all the individual story points and stuff appealing to his own sensibilities, and his own affinity & understanding for Kirby creations in general and the Fourth World in particular (which he draws here for the first time), Walt Simonson knows how to pace and lay out a story on a comics page, before him or since. He never sacrifices story for scale, or scale for story. This book could have been an unholy mess of a read in the hands of an even competent artist. But Simonson makes it work better than a billion-dollar Hollywood blockbuster.

And that’s really the bottom line with ‘Apokolips . . . Now!” It’s the mainstream comics equivalent of the perfect summer blockbuster, and it continues to deliver as much of a thrill as it did the first time I read it.