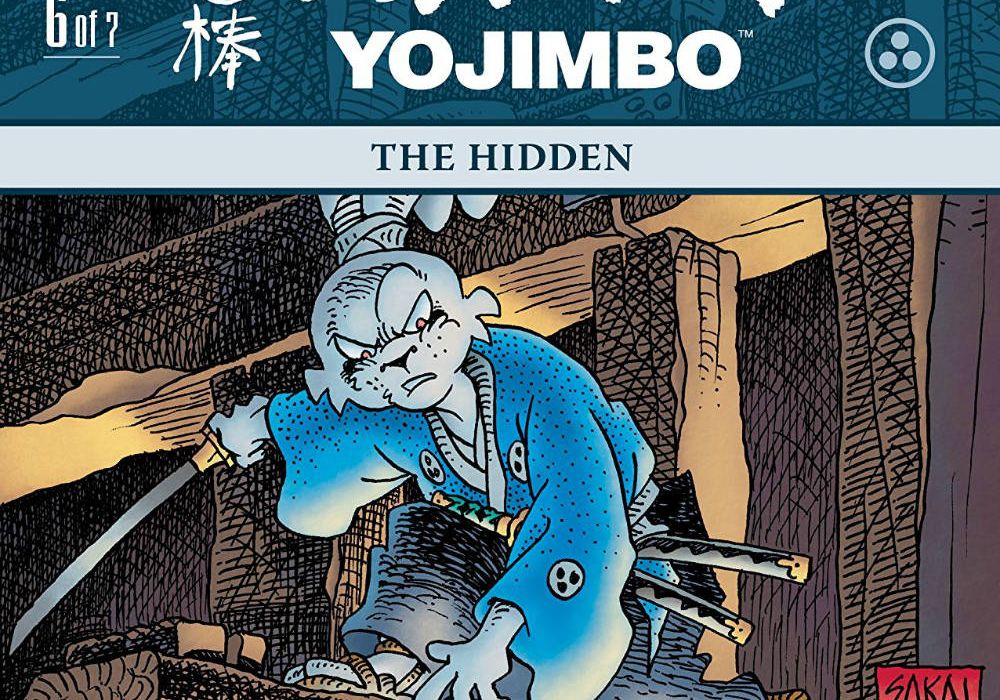 Since the start of “The Hidden,” one question has hung over the heads of Usagi and Inspector Ishida, what could be so important that the shogunate would kill everyone to prevent its existence from even being know? In issue #5, we got that answer. Now, Usagi and Ishida get to deal with the fallout of that knowledge. Beware, spoilers await. 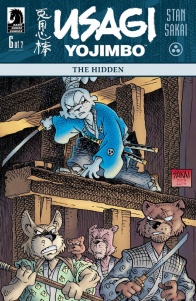 At last, Usagi and Inspector Ishida have cracked the mystery surrounding the foreign box, revealing a secret so explosive it could eradicate the Shogunate. However, unbeknownst to the duo, the government isn’t as oblivious as they assumed and may just be one step ahead of the pair, ready to spring a trap!

As the penultimate issue of “The Hidden,” issue 6 has a lot of set-up work to do. It has to place all the characters in position for the final fight as well as tracking down the stolen book. It’s a surprise, then, that not only are Usagi and Ishida able to find the Kirishitan bible this week, but the issue ends on the Shogunate’s men appearing with a beaten up Oda at the very place that Usagi and Ishida are! Much of what it seems would be the final issue of the series occurs here. That’s not to say this is a bad thing nor to say that the pacing suffers because of it.

On the contrary, the volume of events is balanced out by Sakai’s willingness to let scenes breathe with small conversations and quiet moments of contemplation. It is always moving forwards, juggling the various threads set up in the previous five issues, but in ways that flow like tributaries converging at the sea. Perhaps what helps the issue feel full is that there is very little action. What action there is takes the form of a very nervous thief attempting to escape with his ill-gotten loot and a Kirishitan who always seems to be one step behind Usagi as he searches for the item that was so important to his fallen comrades.

It is a serious topic, one which Sakai gives plenty of weight to by using the historical nature of the Shogunate’s ban on Christianity and the limiting of western books/trade to a singular port in Nagasaki as a backdrop for the mystery and to prompt a discussion of the power of belief and the fear that it can inspire in those who see it as a threat. One thing that is especially praiseworthy is that he does not position these beliefs as correct or incorrect, as many other narratives of this sort would. Instead, they simply are a facet of this world, and are used to explore the broader themes and ideas. For Ishida, these themes are best expressed through his line: “A person can be judged on his beliefs but should be arrested only for his actions.”

However, the series never takes itself too seriously nor does it allow itself to become dour or too heady. It allows simple humor to lighten the tone, such as the snitch’s re-telling of Usagi’s compliment of the Sakana Shogun’s food as an answer to the Shogunate’s men’s inquiry. Bolstering this humor is Sakai’s panel flow and artwork. These are the strongest parts of “The Hidden” #6. His style does take some getting used to though. Faces, while emotive, don’t vary all too much and when they do, the style change is apparent. However, Sakai communicates much more through the body language and it’s apparent simplicity belies a care and attention to detail that strengthens the story and the world. The best example of this is page 17. It’s three, page-wide panels, opening with Usagi and Ishida contemplating what Oda might do with the bible. Their faces are stoic, deep in thought, both are staring into their tea. Then, in the next panel, realization strikes them and they both drop their cups, tea spilling over the table. In the final panel, they are gone, the only evidence they were there is their overturned tea cups. In the center of these panels, is Nezumi, the Neko Ninja, who’s simply eating without a care in the world.

This page demonstrates Sakai’s economy of words, strong character work, and mood setting. There is an urgency in Usagi & Ishida’s need to find Oda and even without saying a word, Sakai is able to bring us to the same conclusion that they come – namely that Oda sold the book to Merchant Kin – through their conversation and subsequent reaction. As such, there is no need to repeat the information. The perspective is fixed and our eyes, while drawn to the words, are kept centered on Nezumi, which also allows for him to indulge in a bit of low-key humor, lightening the tone without undercutting the moment. And all of that is accomplished in three, relatively quiet panels. It also helps that he has richly rendered environments to further solidify the sense of place.

What makes “Usagi Yojimbo” so great is this interplay between the simple and the complex. However, for all that is great about this issue, it still feels like an interstitial one. It is a bridge between the last, great bit of new information and the final, resolving battle. It is a well constructed and solid bridge, one with a rich history and craftsmanship, but a bridge nonetheless.

Final Score: 8.0 – With no new revelations or exciting developments, “Usagi Yojimbo: The Hidden” #6 is the weakest of the mini-series so far but is still a thoughtful, fun and beautiful book.