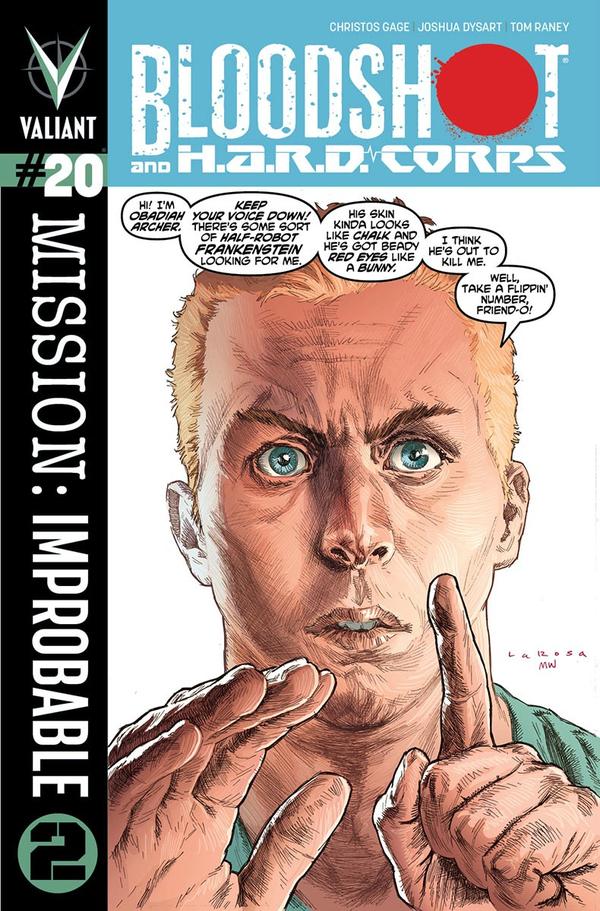 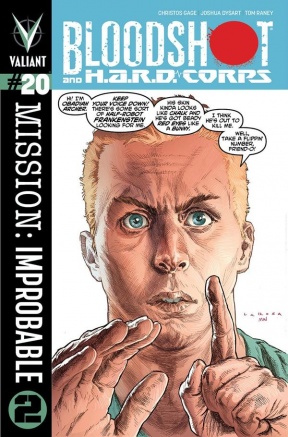 NOTE: Do not read these reviews unless you have read the issues discussed yet. Spoilers are all up in its business.

David:: Another week, another pair of Valiant reviews from Brandon and myself. Let’s kick things off with Bloodshot and H.A.R.D. Corps #20 from the team of Josh Dysart, Christos Gage and Tom Raney, which continues the Mission Improbable crossover with Archer & Armstrong we talked about last week. What did you think of this second chapter, Brandon?

Brandon: I mentioned last week that I was interested to see the tone they would use in this issue. I wondered if they would play it straight or more comical like Archer and Armstrong. I’d say the tone was somewhere in the middle which I think worked for it. I really feel that had the tone been too quirky and goofy it really wouldn’t have worked with a character like Bloodshot. That wasn’t a problem here at all though.

This issue was a lot like the Archer and Armstrong issue before, in that it was good but not great. It had some really funny and cool moments but it didn’t blow my socks off.

What did you think of the issue Mr. Harper? It’s been awhile since we talked this book and it crosses over with your beloved Archer and Armstrong so I am interested to hear your opinions.

David: It’s worth noting that, in your absence, I’ve soured a bit on Archer & Armstrong. Still enjoy it, but Sect Civil War was a bit of a struggle for me.

This issue however was a good one, not a great one, as you mentioned. I think it’s fitting that they’re going for something in the middle, tonally speaking, because half the focus is on A&A and the other half is in the much more series Bloodshot side of the world. That said, it’s fun seeing Gage and Dysart play with that, especially when Archer works H.A.R.D. Corps at the end while sleepwalking, and when they get to cut loose as Vagabond fully embraces getting Armstrong drunk.

It’s a good issue, overall, but I have to say, I thought Raney’s art was a bit weak overall. At least more than I usually expect from him. Some moments were good, but there were some parts – his Armstrong was perpetually strange looking, notably – that he just didn’t seem to fully finish. I’ve often noticed that my enjoyment of Valiant books tend to flow upwards and downwards most dependent on who is drawing them. The writers are normally strong, but the art fluctuates a lot. This is another issue where another artist from their stable – say, Clayton Henry – would have maybe made the book work all the better. Do you agree with me on that?

Brandon: I would agree entirely. I didn’t have a large problem with the art really distracting me from the issue but I would absolutely agree that Henry would probably have been a better fit for the issue. I thought the art was pretty solid in some spots, such as the Sleep-Fu moment, but overall there wasn’t a lot that really leaps out at the reader as being exceptional or noteworthy.

Speaking of that Sleep-Fu moment, I gotta say that was easily my favorite part of the issue. The look on Archer’s face was fucking hysterical. I felt Raney nailed that moment. I don’t want to poo poo all over Raney without stating how much I enjoyed that page.

Any moments that really stood out for you in the issue?

David: Yeah, I don’t want to say Raney was universally bad. He brings a lot to a book, more often than not, and as you said that Sleep-Fu moment was really hilarious thanks to his art in part. He did a great job with all of the boozing scenes too, but there were just some moments where I was taken aback with how he rendered things.

I think the thing that stood out the most for me is something we’ve talked about, and that’s how well this crossover is doing at maintaining the identity of two highly disparate books without making it seem schizophrenic. It’s a delicate balance to achieve, but it never once feels like the pendulum swings too far in one direction, and whenever they bring one side to the other – like when Bloodshot had doves flying out from behind him in the last issue – it happens in natural ways. That’s really impressive, I think, and everyone is working well together to achieve that.

Oh, and I dig the covers. I like how they are a unifying force for the crossover, and that they feature characters from the other book invading the cover. That’s a nice touch.

Brandon: I would agree that the covers are pretty awesome. It’s honestly a pretty unique approach to providing a uniform trade dress for the crossover. I am glad you brought that up because it’s a really nice touch.

David: So to wrap this bad boy, it gets the good, not great grade of a 7.0 for me. I think that’s a fair grade for the book, especially because I’d say it was a slight notch weaker than the last issue which I gave a 7.5. What about you?

Brandon I would give the book a 7 as well. I think that is right on the money.

Alright, in the words of Jay-Z, on to the next one! 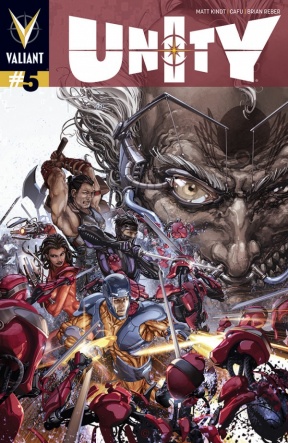 Next up we have Unity #5. This issue was written by Matt Kindt with CAFU coming in on the art side of things. What was your take on this issue David?

David: This book is in a weird place, as I find that it is generally enjoyable with a lot of cool ideas – I like retro Unity, I like the guy who regenerates into new bodies, I love everything Ninjak – but this feels like a relaunch issue after just four issues a bit, doesn’t it? It feels like an event comic that just…kept going. Am I crazy for feeling that?

Brandon: I really enjoyed the issue. I felt like it was a lot of fun and I really enjoy the line up of this book. Having said that I would agree it does feel like an event comic that just keeps going. Although I don’t know if I feel like that is a problem. At least for the moment. Sustaining that epic/event feel isn’t something that is typically sustainable though and that is something that could be a problem down the line. For now I am more than willing to ride with this book. I know you didn’t say that this was an issue as much as it is just how you view the series at this point but do you feel it is a problem?

David: I don’t necessarily view it as a problem, so much as it so far has followed a very specific formula that I don’t think is sustainable if they keep at it. They can’t keep reintroducing the team every arc, can they? It just felt a bit redundant in parts, and it’s more of a question for the future of the book.

As for retro Unity, do you mean did they exist previously in Valiant books? In my experience, this was the only time they ever appeared. I think Kindt is effectively creating a mythology for the team, which is a pretty great idea, and I have to admit I totally want to read about the badass Shadow Woman depicted there.

Brandon: Ok, I wasn’t sure if this was something that existed previously in the Valiant U. It is very cool that they are treading new ground with this. I mean it creates an Avengers or Justice League type team within their universe. I’ll be interested to see if their ranks continue to grow with established characters or if these established characters will just be the big hitters with smaller part players introduced and developed over time. Either way I feel like this really could be the center of their publishing universe. The need to get book of Valiant if you want to jump in and acclimate to their line.

David: Yeah, agreed. I think that is what they are positioning it as.

Generally, I don’t think this was an amazing issue, but a pretty good one. CAFU is an artist I always enjoy, and I thought he did strong work here, and I especially enjoyed how he rendered what Ninjak sees as. I don’t believe we’ve really seen it rendered in such a way, but here’s hoping we get that type of thing going forward.

As for the story, this Dr. Silk – who probably was a former Valiant character but I’m not familiar with him – seems like he’s a pretty formidable and certainly interesting villain. I like how it seems like he’s an infection. He’s like a low level Phalanx like threat, minus the techno organic virus business.

Brandon: Yeah, Dr. Silk was another guy I was going to ask you about but you already answered my question! I think he could be a pretty cool villain and makes me interested to see what types of guys this team will face off with considering how powerful they are and the fact that there isn’t a large pool of heavy hitting villains available to draw upon at this time. Everything has kind of revolved around Harada being the big bad. I am excited to see some new enemies for them to square off with.

As for this issue I would say it was one of my favorite Valiant reads of the month but everything pales in comparison to Quantum and Woody at this point. I’d give this issue a solid 8. How about you?

David: I’ll give it a 7.0. There’s something about Unity that keeps me at arms length, so far, especially when you factor in that this issue felt like a first issue in its near reintroduction of the cast. I know you want to keep a book new reader friendly, but for me, it was a sort of rough way to do that. Overall though, it was a solid issue, and I’m looking forward to the rest of the arc and the development of Dr. Silk.