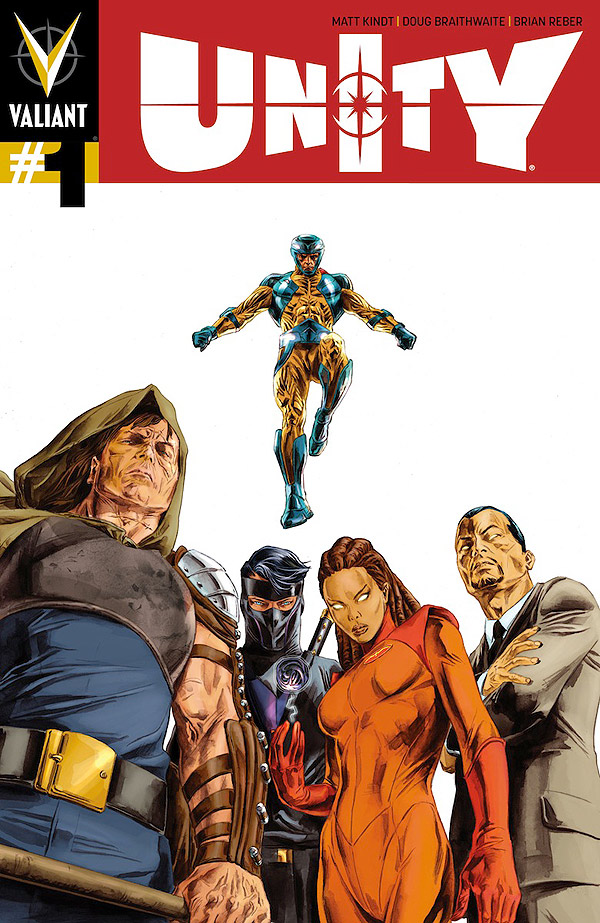 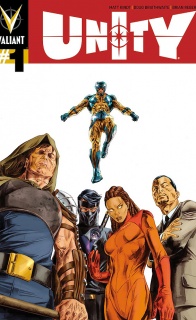 Brandon: Okay Davey Harper, here we are for another edition! This week we’re talking about a heavy weight offering Unity #1 by Matt Kindt and Doug Braithwaite. What did you think of this highly anticipated release? Note: Spoilers are discussed!

David: Well, first I want to say I didn’t really know what to expect from this book. The original Unity was an event that tied the universe together, but this book? It’s an ongoing, so I was a little befuddled as to what it really would be.

Regardless of expectations and what the old Unity was, I thought this issue kicked ass. I loved the opening with the war-time blogger talking about how she became obsessed with the Man-O-War, as per usual Ninjak was tremendously badass, and this book acted as a really interesting counterpoint to Harbinger and Bloodshot, as it positions Toyo Harada as a…good guy? I think this issue does an incredible job of underlining how heavily in the gray areas of the world the Valiant universe exists in, and in the process tells an explosive, exciting story that should have ramifications all over the place. So I dug it big time.

Brandon: I also had no clue what to expect of this and did not know the background on the previous iteration that you obviously did. I had no clue this was a previous thing. In retrospect I should have and I will probably assume everything was something before from here on out.

I thought the issue laid the groundwork well enough and there were enjoyable moments in the issue but it didn’t blow me away. I enjoyed it and look forward to where the book is going though. Plus, NINJAK! That alone has me on board for this bad mamma jamma!

David: Not to be a naysayer, but I’d read a Ninjak comic before an Eternal Warrior comic. Just saying. I like that guy’s super cold, businesslike nature. Every arc would be a different mission where he has to go out and do a different job. Shit, he’s so effective there wouldn’t be arcs – there would just be one-and-done stories. Valiant! You heard Brandon and I! It’s Ninjak time and we have gold for you. Hire us to write this book!

Brandon: I think Eternal Warrior handled in the same way could be awesome. It’s what i’ve been saying from the start. I think that if EDub was done that way he could easily be Valiant’s most dynamic character. The stories could be anything they want at any point in history. Endless possibilities. Having said that, hire the fuck out of us for anything!

David: So getting back to Unity, it seems like its missing a lil’ somethin’ somethin’ for you as a reader. Any guesses as to what that is?

David: Besides Gamma and/or The Monkey in a Top Hat.

Brandon: Well outside of those I don’t know that it was lacking anything necessarily. I enjoyed the writing and the art but it didn’t have a giant hook for me that made me feel like I absolutely have to buy the next issue. It has a solid base though and I am interested to see where it goes. It just wasn’t off the charts awesome.

Anything that really stuck out to you in the issue as being either awesome or awful?

David: I thought it was awesome all over the place. I loved Ninjak’s little mission, I love the positioning of Toyo Harada in a diametrically opposite role than we’re used to him having, I love the food blogger turned war-time journalist, and I loved that instead of the secret mission going well, Aric just killed everybody like they were nothing. They were the vaunted squad of psiot all-stars, and Aric acted like they were flies. Not even particularly difficult flies…lazy ones. It was totally kick ass. I thought there were an array of hooks here, but at the very least, the appeal of Livewire, Gilad and Toyo Harada taking on Aric is significant.

What about Doug Braithwaite’s art? Anything you enjoyed or didn’t enjoy in particular about his work?

Brandon: I thought his art was perfect for the book. I think he does a great job with espionage and high tension action. He’s very adept at telling those types of stories and keeping a fluid pace to it. I really liked his rendition of Ninjak. He just looks like he is going to kick some ass even when he’s not physically assaulting mother fuckers.

On that note, Valiant feel free to put David and I on a Ninjak book with this gentleman.

What did you think of the art?

David: Definitely agreed on his fit on the book. He’s fantastic, and I really dug the way he did the war-time open and the Ninjak sections in particular. He added to the power of the open, while improving on the subtle brilliance of the sneaky awesomeness of Ninjak. I liked his sketchier style too in the open, as it added to the chaotic nature of what was going on. All in all, like Kindt, it seems like he was a spot on fit here.

Anything else to add before we grade this?

Brandon: Not really other than that I am interested to see where this goes and I am Ninjaked! for more Ninjak! Also, can we get some Gamma love somewhere?!

David: I’ll give it an 8.5 because that’s been a common score this month, but it was a very good comic that has me genuinely excited about what’s next. Unity #1 could be the next big thing for Valiant, and after one issue, I’m convinced it will be.