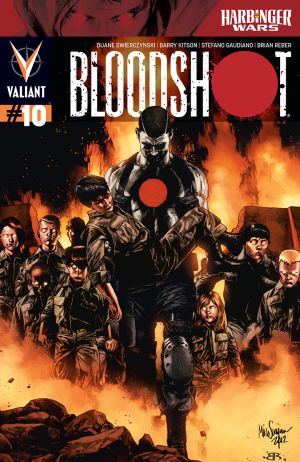 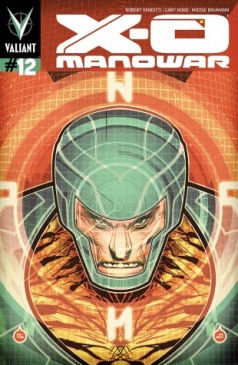 David: It’s another double week in a month full of them, as this week brings everyone’s favorite, X-O Manowar, and his good friend Bloodshot getting his Harbinger War on. Let’s start with X-O Brandon. This is the 12th issue from Robert Venditti and Cary Nord, and while part of me thought it still wasn’t great – hello weak lead! – I did enjoy a lot of this issue, especially the Vine minority (Vinority?) that is developing belief in Aric as their potential savior. What did you think?

Brandon: Well, I actually found the Vinority stuff entertaining as those characters have the most interesting motives and story out of all of the characters in the title. I enjoyed the initial stuff regarding their devotion to the armor but I was less impressed with everything else as far as the story goes. The action was alright but really wasn’t what this book needs more of. I really wish the main character and his plight were as interesting as the Vinority.

David: Agreed. The biggest problem with this book is it will always be a struggle until Aric is something besides a guy who just rages constantly. He’s like the Hulk with armor, which I guess makes him like the Hulk right now. The saddest thing is it’s like going to a restaurant and you have a fantastic looking plate, but only the main dish is bad, the sides are really great. That means you’ll not want to order that meal again, even knowing that your risotto was divine and the spring vegetable medley was delightful.

Let’s talk about art. Cary Nord was really solid last issue, but in this one, especially in the open, he was bit on the weak side. Not bad work, just not particularly good work. What was your take?

Brandon: I really didn’t have any real issues with Nord’s art. I felt it was pretty middle of the road though. There was nothing here that blew me away but also nothing that made me want to take a shit all over it either. In a way it fit the issue I suppose.

Having said all that I felt this issue was better than last issue but I don’t really feel like that says a whole lot to be honest. I just feel like there is a lot lacking and not a lot clicking. I hate to be so repetitive about what I say about this title but it keeps falling into the same traps. It’s a little disheartening.

David: Agreed that it is. I do have to say last issue had some standout moments for me with Nord, and maybe that’s why it ended up not feeling like all that to me this issue. It was just pretty good, not very amazing ever.

Well let’s move on then. Let’s give it a grade so we can move on to some hot Harbinger Wars action. I’ll give it a 5.0. Nothing good. Nothing bad. Just a lot of in-between.

Brandon: I’ll agree that a 5.0 is the best grade as it wasn’t offensively bad but it really didn’t do any one particular thing well either. 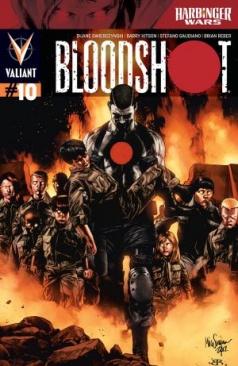 Alright, so next we have Bloodshot #10 with Duane Swierczynski on writing and Barry Kitson on arting. This is a book that we both typically enjoy but as we know that can change on a dime around these parts. What were your feelings about this book? Were the robots in your blood receptive to the issue?

David: Oh, my nanites were SUPER receptive to this book. Can I start with the fact that Barry Kitson coming onto this book is just an absolutely gigantic upgrade over what we’ve seen previously? Man I am happy about that. How did you feel about his arrival onto the Bloodshot scene?

Brandon: I didn’t have any issues with the outgoing artist. Although having said that I really enjoyed Kitson’s work on this issue. This was not the Kitson I was expecting. I was interested to see how he would fit with the vibe of this book and I am very happy to say his art works perfectly. It’s Kitson gone dark and gritty. I really really liked it.

David: I didn’t have substantial issues with Manuel Garcia either, but it was easy to see – at least to me – that his work had gotten sloppier and sloppier with each passing issue. Kitson, on the other hand, is not a guy who does sloppy. Even when he goes dark and gritty – which he did here – it’s still filled with clean lines and powerful storytelling. The guy is a gem.

Previously, you had issues with the way Harbinger tied into Harbinger Wars. You felt it was redundant in some ways. Does Bloodshot’s tie-in do the same thing for you, or do you feel better about it?

Brandon: I feel much better about this issue. This feels more in line with the Bloodshot that I love. I felt like we moved beyond the exposition of last issue and are now back to dropping bodies. I also enjoyed the way Bloodshot’s motives were pushed further again as we see that he really feels the need to protect these kids because of his lingering family issues. It really fits and makes the idea of a programmed killer protecting kids work. In much less talented hands this could have come off as shitty at best.

David: Yeah, this was an excellent issue. I love the idea that Bloodshot is still trying to figure out who he is. Not Robot Bloodshot, but who he was to start with. Combine that with the awkward family angle that’s here, and it’s a pretty damn good recipe for the book. This was basically the perfect storm for Bloodshot, and it helps a lot at least in my book that the writing and art is firing on the same level. This is the total package for Bloodshot, and when it’s like this, it’s not only one of Valiant’s best, but one of the most action-packed and badass books on the market.

But, you know, with a woeful lack of Gamma.

David: She loves you even though you’ve been bad, Brandon.

Brandon Gamma loves me ESPECIALLY when I’m naughty. She sucks the fear right out of me.

David: I don’t want to talk to you about your relationship with Gamma anymore.

Brandon It could be OUR relationship with Gamma…

Are you excited about the arrival of Toyo Harada and his Eggbreakers? I have a pretty good feeling he’s going to use his weaponry and children family to bring some pain to his house. Agree with me, or no?

Brandon Oh I agree. That last page got me even more excited for the eventual addition of the Renegades to the mix. Things are about to really hit the fan in a good way I think.

David: Agreed entirely. Alright Brandon, let’s finish this up. What are your final thoughts on this book and your grade?

Brandon: Well, not much else to add other than that I am excited for this book even more now that Kitson is on board. I really liked what he did on Legion some years back now and this is an awesome evolution of that art. As far as a grade i’d give this book an 8!

David: As I said, I think this is one of the best marriages of writing and art we’ve seen from this book so far. I’m all about this version of Bloodshot, and the combination of wall-to-wall action and interesting character beats is up there in the world of comics. Badassery in comic form, my friend. I’ll give it an 8.5.

We’ll be back next week for a potentially super sized week of Valiant (Re)visions! Catch you then!