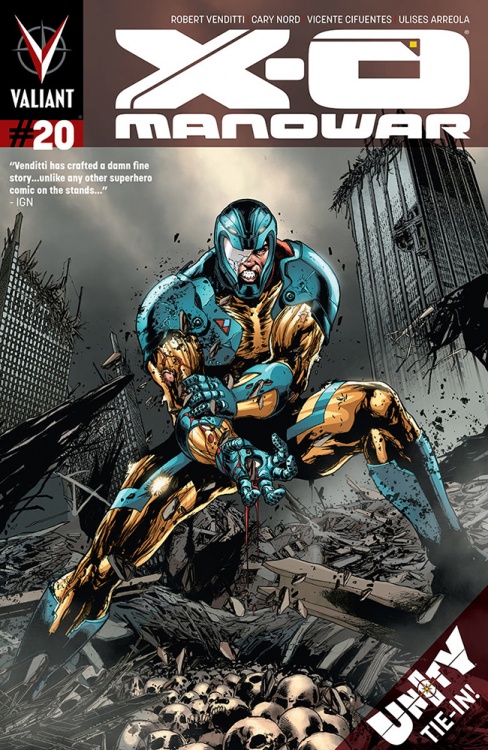 This is going to be a theme this week, but what a killer cover by Kalman Andrasofszky. Simple yet striking, Andrasofszky gets this book off on the right foot.

From there, Venditti and Nord keep this puppy on rollin’, as X-O is pitch perfect at meshing with Kindt and Braithwaite’s Unity (fitting). Continuing the story from Unity #2, Venditti delivers an action packed and truly exciting read, showing how crafty and powerful Aric is even if you take his armor away from him. Meanwhile, Nord’s style seemingly shifts again, getting away from the heavy usage of white space and the bold colors of recent issues, replacing it with a bit more of a straightforward style, but it’s no less appealing for the change. This is a really attractive book at this point, and 20 issues in I’m happy to report that X-O Manowar has now, in many ways, become Valiant’s true flagship book like it was designed to be.

Final Verdict: 8.0 – let’s all agree to show our unity in buying this book 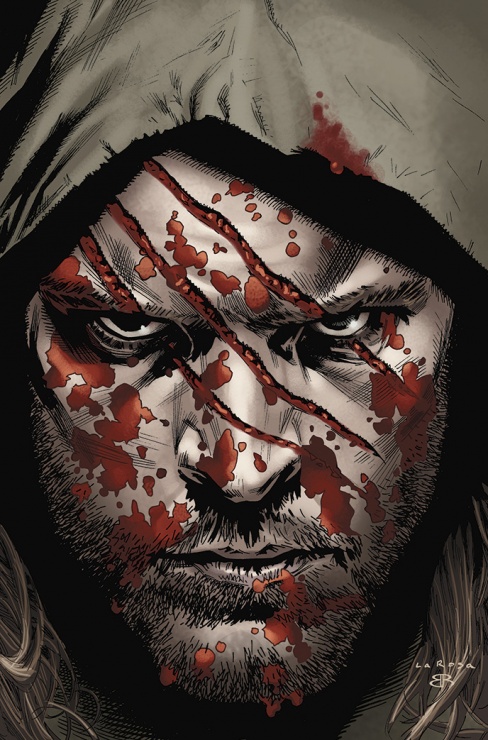 Hey look! Another awesome cover, this one showing a battle ravaged Gilad by Mico Suayan. He looks like someone who would be named “Eternal Warrior” doesn’t he?

Speaking of which, this book is starting to resemble a book titled that, as Greg Pak delivers the things this book should be all about: guns, knives and fighting Earth gods. Throw in some excellent flashbacks that add weight to the story – especially where Xaran’s rather jealous nature comes from – and you have a comic that is starting to shape up right before it gets really interesting in skipping 2000 years. Hairsine and Bernard work hand-in-hand pretty well here, with the flashbacks and the present storyline giving us a clear divide, and both getting moments to shine. It’s an entertaining issue, but with 4001 coming, I have to admit, this issue did more to get me excited for the future (literally) than blow me away now. A good first step, though. 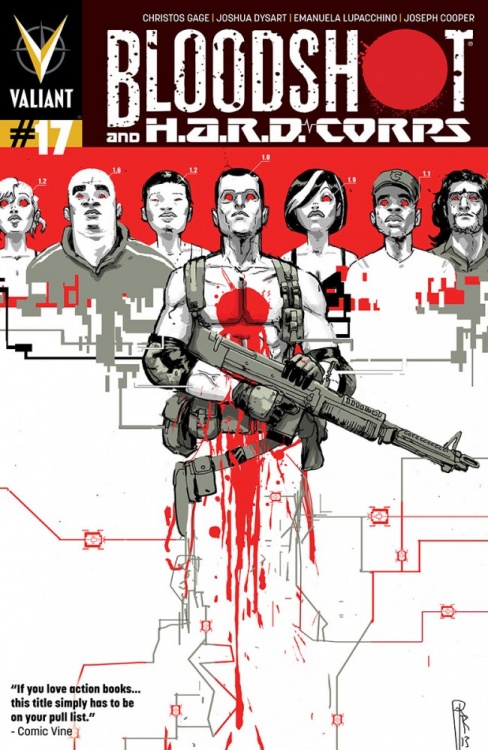 Broken record alert! Riley Rossmo’s cover to this? Fantastic. It’s a cool, creepy and very fitting cover for the issue.

Meanwhile, this is undoubtedly the best issue of Dysart and Gage’s work on the book so far, as they give a ton of weight to Superstar as a character in just one issue, and give us a little more to work with the rest of the cast in the process. Oh yeah, and they also give us the chance to have some most excellent fight scenes, which a book called Bloodshot and H.A.R.D. Corps definitely should have. The high point though was undoubtedly the flashback open with Superstar, as we figure out why he’s doing what he’s doing, and by the time it leads into the final chapter of his story, we actually care. That’s something Gage and Dysart had not done in the beginning of their run, and I’m pleased to say they are making positive steps here.

Lupacchino’s art was superb, as per usual, but holy crap, the art shift about 3/4 into the issue? Diabolical. I have no doubt that Cooper is a talented artist in his own right, but that kind of switch is destined to harm the flow of any story, and it positively nukes it here. Such a bummer, as this was almost a dynamite issue. Instead, it’s a decent one with a lot of positive signs. Here’s hoping the art gets in order with the arrival of Bart Sears next issue.

Final Verdict: 7.0 – getting it together, but let’s sort the art out