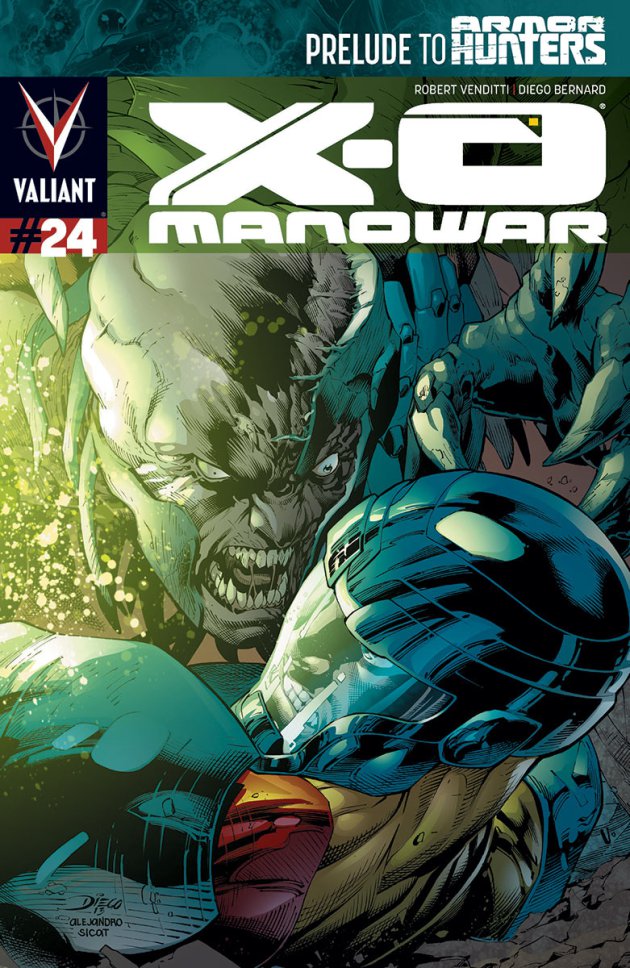 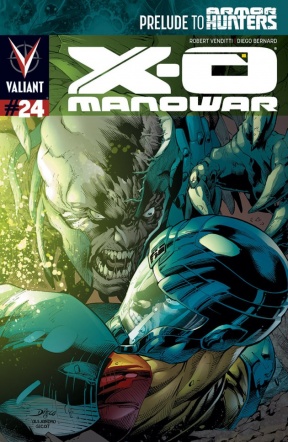 David: We’re back, Brandon, and this time with a review of X-O Manowar #24 from Robert Venditti and Diego Bernard, and the Valiant team says this is the book and the last page that we can’t miss! Are you glad you didn’t miss it, Brandon? What did you think of this latest issue?

Brandon: I thought this last issue was really solid. I really enjoyed the fisticuffs as Diego Bernard presented them. I think he really killed this issue. I couldn’t find any faults with his work in this issue whatsoever. He especially gives you some creepy and brutal looking armor alien guys. The villain Aric dispatched looked better in this issue than he has in any previous.

I had no clue the last page was supposed to be so must see. So there were no expectations for me going into that final page. If there had been I think I would have been disappointed. Did I miss something there? It was cool to see all these characters but I am not sure what was supposed to be so jaw dropping. Is this something I would have got had I read O.G. Valiant?

David: You know, I honestly don’t know. I’m hardly an encyclopedia of the original Valiant universe, but they weren’t someone I recognized. I think the ending was supposed to be shocking because its expansion of the Green Lantern Corps like nature of the armors, and how there are different varieties seemingly enforcing their own brand of justice (or whatever exactly they are doing) amongst the other armors. Or maybe they’re just hunting them? I’m not sure, but I think the hook was supposed to be “what are these guys doing and who are they and yay Armor Hunters!” I think it would have been more valuable if we hadn’t seen anything from Armor Hunters yet, as now it’s like, “oh, okay. It’s those guys from the cover.”

I really liked this issue though, and I want to highlight my moment of the issue: I LOVED how they responded to having running water. I’m big on fish out of water moments, but holy shit, if I didn’t have running water for a week and then got it back, I’d flip out. Never having known the concept and being introduced to it would be like aliens came down from space and handed me a pot of gold. I would probably do what Aric’s lady did and just have it run forever because it’s so magical.

Did you have any standout moments in this issue?

Brandon: I hate to break it to you but I rely on you being my Valiant encyclopedia! I would also agree on that moment being very well done. Even down to the idea of leaving it running because it sounded soothing. I could totally get behind that.

My favorite moment was oddly enough the big reveal at the end that did not blow my socks of because I didn’t see it coming but because the characters looked pretty cool. I am very interested in the giant Celestial/Galactus looking thing. What is that big mother fucker’s deal? It looks like it might be a ship and a colleague of theirs. I am not really sure but he piqued my interest. But again, I wasn’t really shocked by anything in that scene. I was just really into the character designs. The main guy with the skull belt buckle thing was incredibly cool looking. I am not sure if Bernard designed these but he did make them look incredibly badass.

What did you think of Bernard’s art?

David: I think Diego Bernard is a straight gangster with upper management written all over him. I love me some Cary Nord, but Diego Bernard is a perfect fit for this arc. This is a much more action oriented one, and that scene between Aric and the other armor guy was straight badass, and wonderfully creepy once Aric’s armor started going on auto pilot. He’s an artist that brings a lot of power to the page, whether its the aforementioned showdown, or one between Aric and Capshaw from M.E.R.O. I really, really dig his work.

My big hope for this book is they keep the two of them on as a rotating art team. They balance each other out very well, and Venditti plays to their strengths very well.

This is the big setup issue for Armor Hunters though, and I gotta say: are you feeling it? Are you looking forward to this event more after this issue?

Brandon: Yeah, I would say that I am excited for Armor Hunters. I wasn’t really to sold initially but after this issue I am actually pretty into the idea of Aric vs some awesome looking space baddies. I think if anything it should be a lot of fun to watch him go toe to toe with some people that are rocking a similar power level. If his fight with one guy like this resulted in a lot of awesome I can only imagine it will get exponentially more awesome when were looking at multiples.

David: I have to say, I’m pretty pumped for it. It’s the type of crossover that makes a bit more sense to me that books like Harbinger and Bloodshot would get involved with because these guys clearly have a lot of firepower, and the world is going to need a lot of help. If you’re going to make a book an event, make it an EVENT. We’ve talked about how Valiant has done a good job with villains, and I think the villains are the key to making this type of thing work. We haven’t seen much of these guys, but I think they definitely have the potential to rock the party.

Do you have anything else to add before we grade this bad boy?

Brandon: Nothing else to add here. I’m just really enjoying this book at the moment and I have a feeling it is about to get even better.

David: I’ll agree with that. 8’s all around! X-O Manowar really has developed into the flagship of the Valiant Universe, and not just in name only, and by the time Armor Hunters hits, I think readers will be ready for an event that properly integrates multiple aspects of the line into it. It all starts here though, and this issue was as rock solid as ever.