With her first foe as Valkyrie, Jane Foster is ready to raise some Hel, and so are her readers. 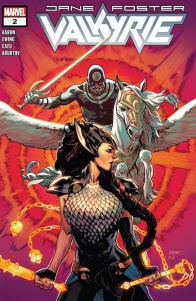 INTRODUCING THE GOD OF THE KILL – BULLSEYE!

The deadliest shot in the Marvel Universe just got his hands on the sword of a god! With the Asgardian weapon Dragonfang, Bullseye has the power to kill a god in a single stroke — and he’s about to prove it. Jane Foster, the newly christened Valkyrie, must learn a hard lesson: Not every death can be prevented. Who is next on Bullseye’s list — and what is the assassin really after?

“Valkyrie: Jane Foster” #2 is a tricky book, one that seems to still be finding its footing not unlike its eponymous character. Under many a writer, the new Valkyrie’s journey would be difficult to take seriously, especially as she is faced with a traditionally relatively street level villain like Bullseye. Are the two who have taken up this book up to the task? Absolutely.

Jason Aaron and Al Ewing each are in no way strangers to the Asgardian mythos of Marvel Comics; Aaron’s run on the “Thor” comics from 2012 to its upcoming conclusion has been a masterpiece of an epic, while Ewing’s “Loki: Agent of Asgard” completely redefined the trickster through metafiction. Who better to drive the stories Asgard beyond both of those characters than this dynamic duo of literary genius? If anything, both Aaron and Ewing are at the top of their game here, boldly forging their way forward into a post-“War of the Realms” era.

Central to “Valkyrie: Jane Foster” #2 is the idea of evolving the narrative: out with the old, in with the new. From Undrjarn the All-Weapon to the way in which Aaron and Ewing’s most recent story concludes, there is an overall feeling that, as of the War of the Realms, people are not necessarily beholden to the old way of things with regards to the Nine Realms. In so doing, they make excellent use of disparate elements such as previous Valkyrie Brunnhilde, her sword Dragonfang, and, of all people, classic Daredevil villain Bullseye.

The use of Bullseye in particular points to a few well-handled elements. First, by taking a villain from a rogues gallery that is typically far below the radar of the likes of Thor (or in this case, an ex-Thor) and placing him in a position where he is a credible threat to the divine entities of Asgard itself, Aaron and Ewing show that nothing is the same anymore in a way that Thor or Loki could not match. As the new Valkyrie, Jane Foster represents a way in which the old rules are gone and everyone, both heroes and villains alike, must adapt, from the development of new powers that are still being learned to methods by which horrible, immoral beings can affiliate themselves with sacred armaments, no matter how mortal they may be. Furthermore, his particular brand of pitch-black humor lends itself to both loathsome actions and almost amusing dialogue built on his own history with assassinations.

CAFU is, by far, the perfect artist to succeed Russell Dauterman in this latest stage of Jason Aaron’s Asgardian epic, bringing with him a fierce intensity that enables the story to practically live and breathe, an energy that permeates the entire work. On the subject of facial expressions, CAFU’s intricate details on individual facial expressions showcase heights of emotion and distress for our three leads in particular. The righteousness of all of Jane’s emotions, from her anger to her sorrow to her determination and everything in between, are all so vivid that they feel as though they could be truly real, from her snarling expression to the tears that stream down her face. Meanwhile, Bullseye’s utter madness is visceral and extremely disturbing to behold, from the wide eyes and toothy smile of one who mortally wounded a god to, at the height of his influence, a disgusting look at even his gums and more, all of which lends itself very well toward the “God of the Kill” designation in the solicitation.

CAFU is just as effective at longer distances, through the action, angles, and paneling. The action sequences are highly dynamic, but not in a way that is overly acrobatic or unrealistic. Every blow from a weapon looks like it really hurts or does serious damage to the area around it. Every swoop of Jane’s synthetic wings acts in such a way that readers can almost hear the wind screaming by her head as she moves at such fast speeds. The use of variable angles, from close-ups to views up or down on a battlefield, definitely help to show the vigor of each and every moment, even when things seem to have momentarily calmed down. Of particular note is a panel that appears to have been drawn up in full, then split in half lengthwise, both examining a person in full and drawing particular attention to the weapon in the person’s hand before an important blow is struck.

Jesus Aburtov’s vibrant color choices further enhance the brutal yet fantastical combat in CAFU’s artwork. There is just enough shadow over Bullseye to make him appear to be more menacing than usual without making him into an outright divine entity of fear and death, keeping him paradoxically both on a relatively street level appearance while using the dissonance against his actions to illustrate how bizarre and wrong this all is. Aburtov’s use of faint reds around the deicidal assassin, especially in regards to close-ups, helps to show how savage and unrestrained he truly is, even as he feigns an air of civility when speaking with the new Valkyrie. In contrast, the ethereal hues and shades of gold and silver point to the Asgardians and their direct associates, making the group out to be more than humanity, especially when paired with the somewhat ominous glow to their eyes. Dark purples are associated with death, as if the end of life is some unknowable pit of shadows. This kind of shade, much like the bright colors, is lain in direct contrast against the far more natural greens and browns of everyday mortal civilians in New York City. The similarity between those colors and those of the buildings and trees around them lends itself to the idea of the gods overlooking mortals, a fact that makes Jane’s decision not to do so all the more important.

Final Verdict: 8.0– Drawing new life from the realms of death, Jane Foster is well on her way to a new era of greatness.