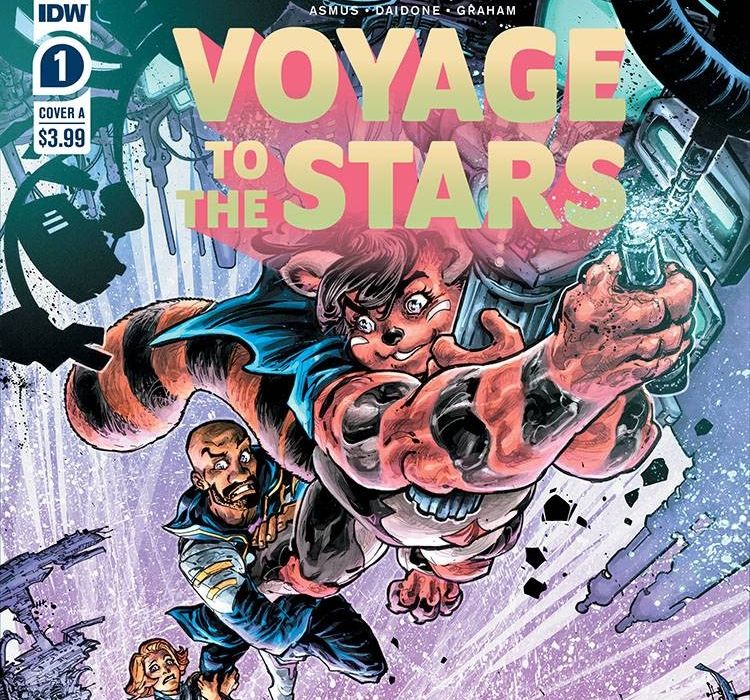 Comic adaptations of popular properties is nothing new, even podcasts. So it was only a matter of time until “Journey to the Stars” was adapted into a comic. Does audio-driven storytelling translate well to visual form? Will the comic appeal to readers unfamiliar with the podcast? Let’s take a look and find out. 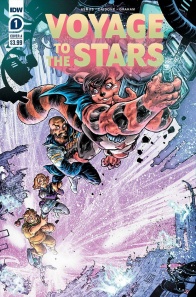 The hit sci-fi comedy podcast starring Colton Dunn (Superstore), Felicia Day (Supernatural), Janet Varney (Legend of Korra), Kirsten Vangsness (Criminal Minds), and Steve Berg (Drunk History) crashes into comics! Earth is gone. Only one intrepid crew of misfits managed to escape, now determined and ambiguously destined to stop a growing, ancient evil from consuming the universe. Though stopping it may be tricky, as our heroes can’t help but destroy just about every planet and species they come across. Kinda debatable who’s the bigger threat.

“Voyage to the Stars” has a unique challenge: how can the comic both appeal to fans of the podcast and new readers alike without retreading old ground? My own knowledge of the podcast comes from a single episode during SF Sketchfest, so my experience is limited. As such, this review will be more from a newcomer’s perspective than that of a longtime fan.

The comic does a fine job introducing readers to the story. It uses a quick prologue to bring us up to date, before dropping us into the action. The character introduction seamlessly transitions between different characters giving their individual log entries/podcast recordings, which helps present them to us by name while giving readers a good understanding of their personalities. It’s an efficient introduction, which segues nicely into a half-page panel of a giant robot being chased by an equally giant furry creature.

This is where the comic breaks free of the restraints of the audio medium. Where in a podcast we could only hear characters describe these things and narrate as the chase goes on, in the comic we can see it in its full glory. Connie Daidone’s illustrations and Reggie Graham’s color work bring these characters to life and add unearthly hues to the strange planet the characters are on; the flora, fauna, and scenery alike are all nicely imaginative and alien.

This also opens up opportunities for some visual gags and moments where the scene can speak for itself. For instance, when the crew finds a powerful space being sealed away, we get several small panels covering details like the signs posted around the tube (I particularly like “Break in case of Nothing”) and a shot showing off his abs. The characters’ reactions are also portrayed well through the illustrations, including a very anime-esque look on Elsa’s face.

Now, there is definitely a bit of anime inspiration to the art style, but it’s subtle enough that it only comes through in certain moments, particularly the characters’ eyes and hairstyles. That isn’t a bad thing, of course, and the illustrations still have their own unique style to them.

At the same time, the dialogue carries the banter nicely, giving us more of an understanding of the characters. As far as the that goes, adapting characters into comic form can be difficult as well. Where voice acting can convey tone and attitude in a podcast, the art and lettering have to pick up the slack in comics.

Fortunately, it manages that nicely. The characters all have clear and consistent voices that come through in the dialogue. Even without listening to the podcast, it’s still easy to get an idea of what the characters sound like through their designs and dialogue. This also works with the introduction of (what I assume to be) a new character called The Exemplar – his enthusiastic, trusting, but sometimes a little overconfident and condescending attitude comes through nicely. This leads to good banter with the crew, as Tucker tries to butt heads with him and the rest of the crew tries to keep up with everything.

Now, as the comic is based off a comedy series, there’s one important question: is it funny?

This is a case where fans of the podcast have an edge over new readers. Where longtime fans will see Tucker put a pair of giant “truck nutz” on a robot and go “Yep, classic Tucker,” it may not land as well for new readers. Similarly, comedy driven from characters with clashing personality types works best when we’re familiar with their personalities first.

At the same time, there are still plenty of gags that land well for new readers. The snarky asides, visual gags and overall comic timing work well, so even readers new to “Voyage to the Stars” can enjoy it. While that makes the comedy of the first issue a mixed bag, I have no doubt that readers who stick with the story will get to know and enjoy the characters as well as the many fans of the podcast do.

All in all, “Voyage to the Stars” #1 is a strong start for the comic. It gets new fans caught up to speed quickly, keeps things fresh for longtime fans and provides solid artwork, dialogue, humor, and pacing. If you’re a longtime fan of the podcast or curious about starting something new, this comic is a good place to start.

Final Verdict: 7.5 – A good introduction for new readers and longtime fans alike, made with plenty of love and dedication from the entire creative team.