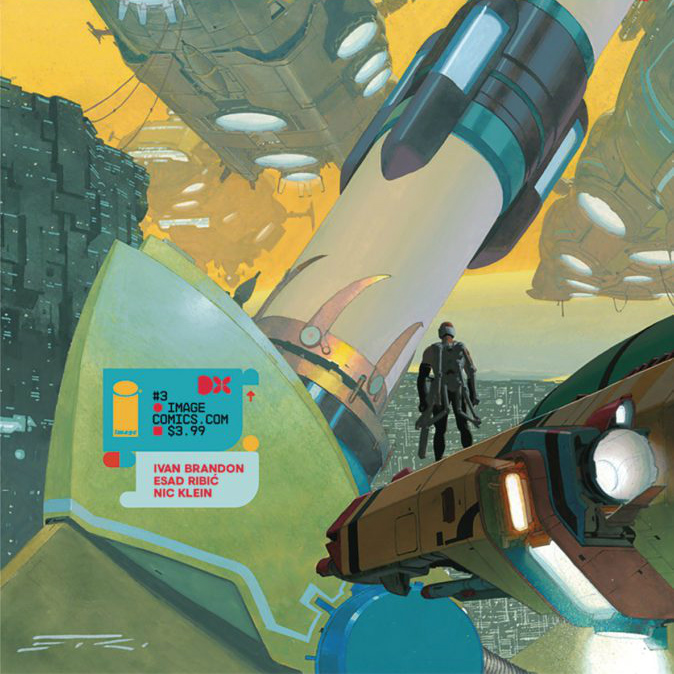 War! What is it good for? Ratings, apparently. “VS” drops us in the middle of an dark, futuristic world, where gladiatorial bouts are broadcast and soldiers are celebrities. The last two issues introduced us to Satta Flynn and set the stage for his struggles, so now we get world-building and the plot thickening. 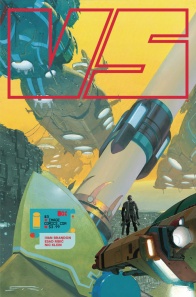 Flynn struggles with a series of humiliating defeats… that are making him more popular than ever! As a new generation of gladiators is unleashed on the battlefield, they’re none too happy with a soldier who refuses to stay dead.

“VS” as a story has been taking its time to get us acquainted with the world Ivan Brandon has created, one step at a time. The ongoing narration helps bring us as readers into the action without spelling everything out for us, so there’s always a little more to learn about the world this comic is set in.

Issue 3 builds more on that world, introducing us to new concepts such as ascension, the lands and rights that companies lose in their televised wars, and the rest of Flynn’s team. Very little is outright explained, but it’s all presented with enough context for us to understand the general concept.

Similarly, we receive most of the exposition through dialogue. The story sets up proper moments to give us key pieces of information, such as the ratings Flynn brings in and what people stand to win or lose based on the outcomes of the battles, so it doesn’t feel clunky.

Admittedly, it does occasionally switch to the narration to carry the story, but when it does it’s still part of the dialogue more often than not, accompanied by panels that show us what they’re talking about quite well.

Speaking of showing, “VS” must be praised repeatedly for its artwork. Esad Ribic’s illustrations are simply breathtaking – each page is a work of beauty unto itself.

The sprawling futuristic city is a sight to behold, and there’s so much detail and creativity put into every design. Often times pages will dedicate half their space just to show off the location, and my goodness is it ever a sight to behold. The sci-fi designs and architecture are truly imaginative, even when combined with large tubes that I’m fairly certain Futurama did first.

Then we get the breathtaking scene of the orbital elevator, rising above the planet. The bird’s eye view of the world, with its glowing blue city on a dark sphere, and a setting sun casting red and orange over the horizon, is absolutely stunning.

Nic Klein’s color work continues to bring out the best in Esad Ribic’s illustrations. The shading adds a level of depth and detail to every scene and character, and the color choices that accent each scene make the moments pop as needed or mute as desired.

Then we get to the character designs. There are so many different and distinct designs it’s hard to know where to begin. In addition to Flynn and his Dr. Octopus-esque gear, we see Major Devi both in a dress with a stunning pattern of crossing shapes as well as in her ninja-style outfit she takes to the battlefield. Then we meet people with bonsai trees growing out of their skulls, green-skinned reporters, and so many more creative character designs that it simply must be seen to be believed.

Look, the art is fantastic, that’s really the short version of what I’m getting at. Esad Ribic creates amazing designs for both the scenery and the characters, and Nic Klein’s colors bring them to life.

Now let’s look at the characters. While the past two issues of “VS” were primarily focused on Satta Flynn, his injuries, recovery, and the battles he fights in, this issue expands to look at more characters around him. A good focus is put on the aforementioned Major Devi, whose performance on the battlefield puts Flynn to shame, but remains incredibly proud and determined no matter what the ratings may be.

We also get to see the higher-ups in this world, the ones who profit from the gladiatorial matches. They stand around debating viewerships and ratings, where performances on the battlefield only matter insofar as the viewer numbers are concerned. We even learn more about what’s at stake in these battles, and see how they struggle to maintain both high ratings and a strong military force.

With that said, very few names are actually given. We’ll be learning who’s who soon enough, but what matters is what they are and what they do, not who they are.

“VS” also gives us more of the fandom following Flynn. Though we see him struggle and fall behind in the action scenes (beautifully illustrated as they are), his supporters are still diehard fans, and his ratings continue to grow. This creates a tough situation for all characters involved; Flynn is clearly losing his edge, but has to keep fighting; it’s what drives him. At the same time, the higher-ups can’t bench him without losing ratings, but keeping him on could prove detrimental.

That, however, is a dilemma to be resolved in due time. Until then, just understanding it tells us so much more about the world and the characters that inhabit it. Ivan Brandon does a fantastic job setting up all the characters and plot elements in play, and it makes for a great read.

That is the ultimate in world building through “show, don’t tell.”

Final Verdict: 8.4 – “VS” is proving to be a fantastic comic, with solid pacing, a unique idea, effective world building, and some of the most gorgeous art I’ve seen in comics in a long time.