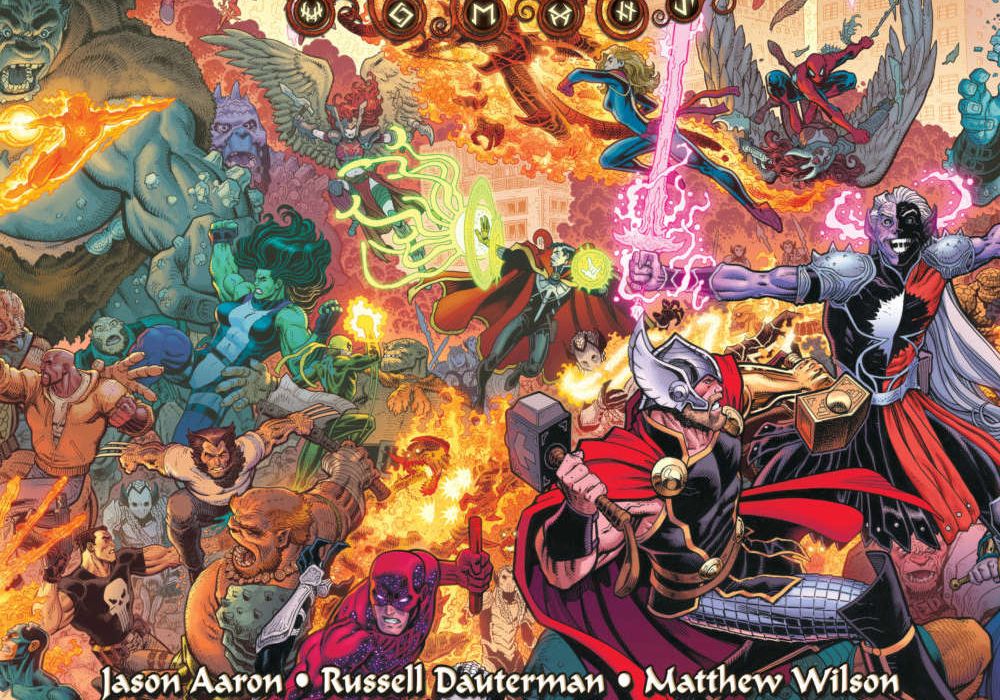 In the deepest parts of Svartalfheim, Malekith laid down his plans. He gathered his armies and his generals, his kill teams and his soldiers. For six years he plotted and struck, always one step ahead and a thousand miles away.

Now, he is ready. Now, he is invading. Now is the War of the Realms.

The stage is set. Realms will live, realms will die and the Marvel universe will never be the same.

THE WORLD AT WAR!

Asgard. Alfheim. Heven. Jotunheim. Muspelheim. Niffleheim. Nidavellir. Svartalfheim. Vanaheim. All of the Ten Realms have fallen to Malekith and his army except one: Midgard. Home to Thor’s beloved humans. Home to heroes and gods alike. Now, at last, it burns. And Thor won’t even be there to see it.

All hell breaks loose in New York City as Malekith and his allies begin their invasion — and the greatest heroes of the Marvel Universe watch as the Earth falls!

Right off the bat, “War of the Realms” feels like the first issue of an event comic. Grand in scope, all-encompassing in its treatment of the Earth, and properly set-up so as not to have appeared out of thin air, this is the first time in a long time that a Marvel event has lived up to the hype surrounding it. For those who haven’t been keeping up with Jason Aaron’s Thor epic, this is merely the end of a long road and the culmination of six years of storytelling. For those who have not, the “War of the Realms” does a good job of catching them up to speed.

There is very little prior knowledge necessary to enjoy this event, which is exactly what you’d want from something that touches more than just one little corner of the Marvel Universe. In fact, the comic even opens on the most quintessential start of them all: “In the beginning, there was only darkness.” By this point, Aaron has mastered the epic tone of a tale of this magnitude (and I do mean that in in a “Gilgamesh” style way.) Using a third-person omniscient narration to achieve this, Aaron is able to properly set the mood, as if this were an oral tale being told by a fire, recounting the battles of old in all their glory, in all their tragedy.

Before I talk about the story, and the couple problems that people may have with this issue, I want to talk about the return of Dautermann and Wilson. These two pull out all the stops for “War of the Realms” #1 and it shows. Dauterman’s eye for composition is near perfect, thinking about pacing and story, guiding the eye and the subconscious mind with each turn of the page. We begin the comic with a couple pages setting the scene and the mood. No panels, only spreads. Then, on Asgard with Odin, the page has two regular panels inset onto it, nestled in the gorgeous cosmic landscape Wilson and Dauterman paint.

The motion from page to panel to panel creates the effect of us flying in, approach the All-father as he sits, dejected, on his destroyed throne. The next page sees the panels remain the same, save for the final one, which bends, pointed like the knives of the dark elves that invade. Suddenly, all the panels twist and rend, fighting and breaking the regularity that was established. This pattern continues throughout the comic, signaling when things are about to go pear shaped and when the dark elves are there to attack again.

If you want a more concise example of Dauterman’s compositional skill, take a gander at the second two-page spread of the issue. It would be easy to lose Malekith and Thor or to sacrifice the scale of the Frost Giants but instead, he utilizes the panels to guide the eye, keeping clarity of action while keeping the action centered. Small touches like a slightly longer tail on a panel allows you to know which panel to got to next while allowing the page as a whole to convey more than just what is in each element.

Matt Wilson and VC’s Joe Sabino shouldn’t be forgotten though. Sabino IS the “Thor” letterer by this point and his style meshes perfectly with the artwork, channeling each individual type of character without overwhelming the rest. Wilson’s coloring and Dauterman’s art are inseparable, one complimenting the other, working together to convey the many-colored, magic-laden fantasy aesthetic that is layered with realistic shading, making sure everything is clear so the action is easy to follow and the emotive moments hit their mark.

And boy do they. I always knew that Loki’s arc was a tragic one for Aaron but I never expected this to be the way it played out. It’s possible he has more up his sleeve, he is the god of tricks and lies after all and, as those who’re reading “Thor” as well, we know where his arc takes him at the end of the universe, but even still, they got me good.

However, I know that not everyone will be satisfied with this issue. For one, much of this issue IS set up for the rest of the event. It’s an invasion, one that is concerned with placing all the pieces, establishing the stakes, and showing just how overwhelmingly prepared and powerful the foes are this time. Not everyone will find this to their liking, especially when considering the price tag. At 48 pages (according to solicits) for the print edition, $6 still feels like a lot of money and, while I would argue the artwork alone justifies the price, some may find that the story isn’t quite enough to justify it.

Digitally, for the “director’s cut,” a term that is exceptionally silly but OK, this is less of a problem, as the issue clocks in at a whopping 165 pages, and for process junkies, this is amazing. And you get to read the script and see just how each aspect of the comic builds and improves on each other. That said, there is one more aspect of the comic that one might find justifies the purchase, and that’s the characters.

Aaron balances his cast magnificently, not allowing it to get too large while still keeping the scope of the series wide. He uses his ensemble so that each character gets page time, clarity of voice, and that his main cast, the Asgardians, gets plenty of focus. It’s not perfectly balanced — I would have loved to see more Freyja, Jane, and Roz — but for an event that has as many characters as it does, not feeling like anyone important got swallowed up or sidelined is an important step. Plus, we get more Thori and Malekith’s flying tiger.

All in all, “War of the Realms” #1 is a gorgeous, impressive first issue that sets the stage for a war the likes of which Midgard has never seen and, considering the next issue is titled ‘The Midgard Massacre,’ it can only get more tragic from here.

Final Score: 9.0 – Visually stunning and suitably epic, this is an event comic that earns the moniker, even if this first issue does more set-up than it ought to.