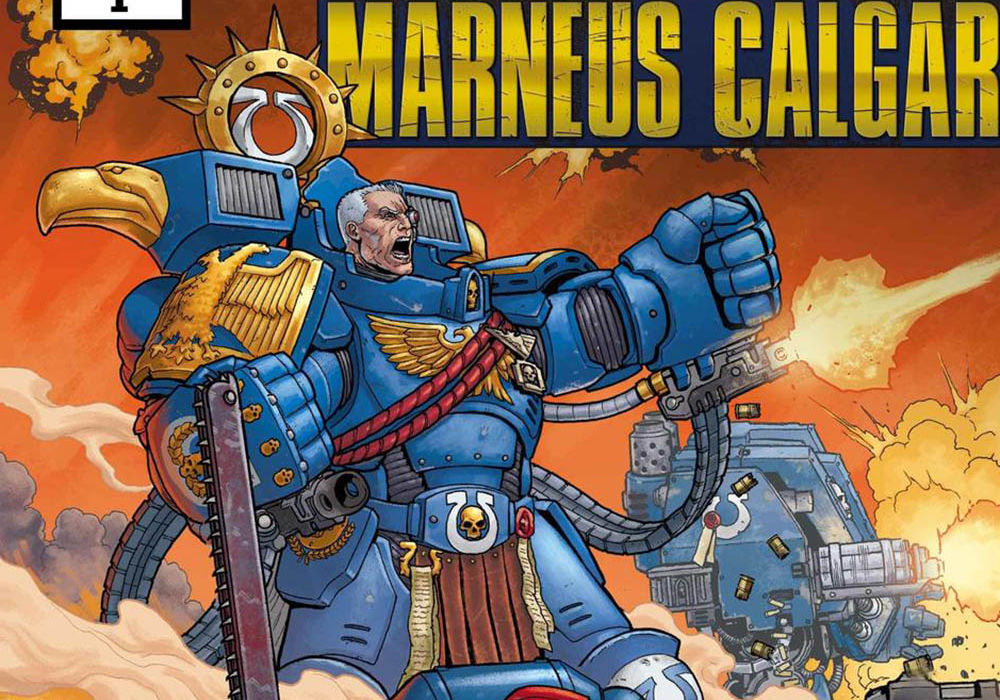 Warhammer 40,000, the popular tabletop miniatures war game, has come to Marvel Comics. This is the game that’s responsible for the term “grimdark” and embodies it with an unending war, where no side can be considered “good.” So how do writer Kieron Gillen and artist Jacen Burrows bring the game into comic book form? Let’s take a look and see. 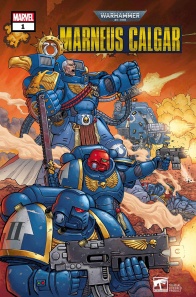 In the grim darkness of the far future there is only war…The saga of WARHAMMER 40,000 comes to Marvel Comics! MARNEUS CALGAR, the legendary Chapter Master of the Ultramarines, leads his elite Space Marines against humanity’s greatest threats in a galaxy engulfed in endless war. Kieron Gillen (UNCANNY X MEN, JOURNEY INTO MYSTERY, The Wicked + The Divine) spearheads the initiative with this introductory miniseries, illustrated by Jacen Burrows (PUNISHER: SOVIET, MOON KNIGHT, Crossed)–and we’re just getting started! Now, witness Marneus Calgar’s never-before-told origin story, from his beginnings on Nova Thulium, to his campaigns in the Black Crusades, and to the unfolding mystery of the BLACK ALTAR, as a deadly threat from his past reemerges to threaten the present of the Ultramar system. This all-new tale is essential reading for 40K aficionados, as well as the perfect primer to the world of WARHAMMER 40,000 for those new to the universe. See the Ultramarines in glorious combat, the strife between the worlds of the Imperium, and witness the larger than life characters who preside over it all! This is but the first foray into the larger darkness that is to come from Warhammer and Marvel Comics. Be prepared.

When you think of a game like Warhammer 40k, the first thing that comes to mind is usually battles between massive armies. Ultramarines, Orks, Tyranids, and other powerful forces are locked in unending conflicts – it’s natural to think the comic would reflect that.

Yet in “Marneus Calagar” #1, the action is more of a side note to the story itself. In fact, a massive battle is jumped over in a page, allowing the conversation and story to progress as though it was a brief interruption.

This actually suits the story quite well, as it creates a new perspective of the world. The massive battles, the bloody conflict – they’re so commonplace, so accepted in the life of an Ultramarine, that they’re hardly worth mentioning. Using the battles as a background to the story helps build the world in a way that focusing on it would distract from.

Rather than show us the spectacle of battle to demonstrate how this is a universe torn by war, it demonstrates this by making it feel normalized.

Of course, that’s not to say that we don’t get any action or bloodshed. This is Warhammer, after all. In fact, the comic opens up by following a bullet in flight, before giving us our first introduction to Marneus – mowing down a wave of foes as he holds his ground at the top of a stairway. While this is a flashback, it instantly shows us what kind of Ultramarine he is, before bringing us out of his flashback and into the present. This is a great establishing moment.

We’re also given a brief two-page spread of another battle, once more showing off Marneus’s might. This is a full Warhammer-style skirmish, letting artist Jacen Burrows flex his abilities. It’s big, it’s bloody, and it showcases the clash of armies nicely, before returning to the conversation in the aftermath of the battle.

This is great for establishing the tone and the world, carried on by the conversations between the characters. Even readers unfamiliar with the world of Warhammer 40k can gain an understanding of the lore and universe by following the conversation, which establishes the current situation, needs, and characters.

The story also cuts back to Marneus’ childhood as he begins his training. Since we’ve seen him as a decorated Ultramarine, this brings us back to his roots so we can see the Spartan training he has to undergo to put him on the path to his current standing. In this case, we get to meet the characters and learn about Marneus as a youth. It’s also here where we see how far the indoctrination of the Imperium of Man has been drilled into them.

The characters talk about being warriors, quote scripture, and dream of being Space Marines. To them, it’s noble, and since Marneus is our viewpoint character, it would be easy to feel that way too. But when you look at the world and see how 40 years is considered a long life, how so many young teens die just trying to take their first step towards being Space Marines, and their zealotry towards their God-Emperor, and it becomes a chilling look at an indoctrinated empire.

Kieron Gillen’s storytelling is masterfully done. The world building and character work are weaved into the comic seamlessly as we get further in to the world of Warhammer.

Then, of course, we have the artwork. Jacen Burrows does the illustrations, with Java Tartaglia providing the colors. Rather than go for an overly-gritty, hyper-shaded look, the artwork strikes a nice balance between detailed and clean, clear designs. Each mark and blemish on the Space Marine armor is clear an added with intent. Java Tartaglia’s color work adds a good amount of shading to the details while still making the designs pop and remain clear against the backgrounds.

This combination helps make each scene look excellent. In addition to the aforementioned battle scenes, the artwork brings the designs from Warhammer to the page nicely. The backgrounds and scenery add to the world, keeping the proper “grim, dark” setting without making the artwork overly grim or dark.

Jacen Burrows does a fine job with the character art as well. His strengths undoubtedly lie in the larger, muscular characters and the more mechanical designs, but this is a perfect comic for that. He works some nice subtle touches into the characters’ expressions (when they can have expressions, of course; helmets will get in the way of that), and the designs are distinct and full of personality. He also gets a nice chance to stretch his skills with more monstrous, outlandish designs near the end with a massive Ambull creature.

If you’re not familiar with the world of Warhammer 40,000, “Marneus Calgar” #1 will help provide you with an introduction. If you are familiar, it will bring you in to the life of an iconic character. Either way, Gillen, Burrows, and Tartaglia do an excellent job bringing the game into comic book form.

Final Verdict: 8.8 – The world of Warhammer 40,000 thrives in comic form, with excellent worldbuilding, character work, and art. For Warhammer fans, passing up on this comic is nothing short of heresy.