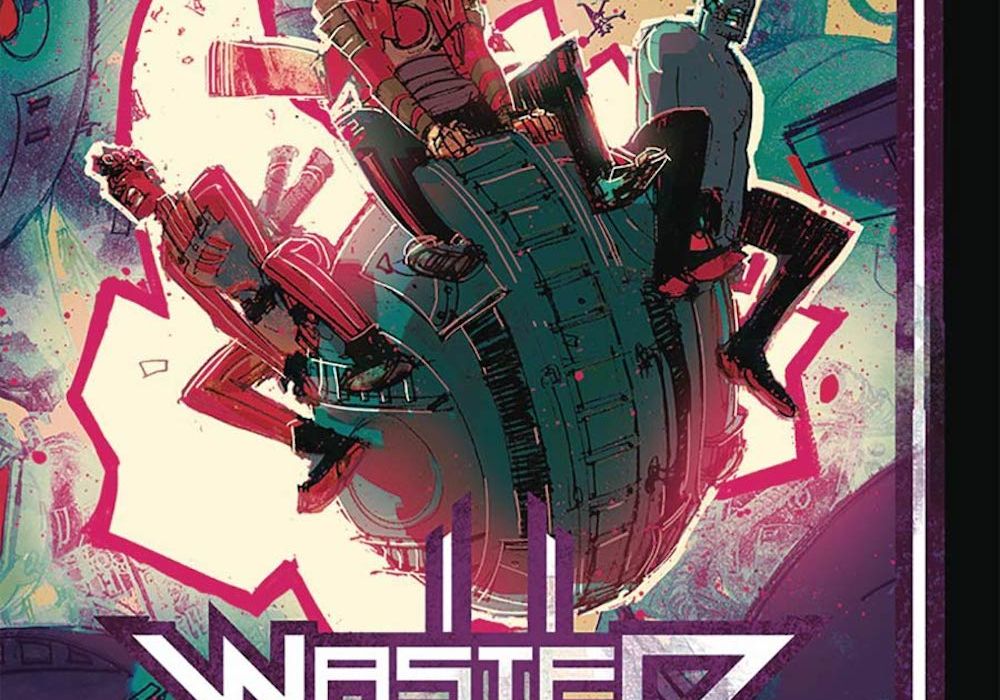 When society is bound to individual fears as a means to enforce a dichotomy of “bully or bullied” for everyone, what kind of person can actually effect change? Michael Moreci, Hayden Sherman, and Jason Wordie seem to have an answer. 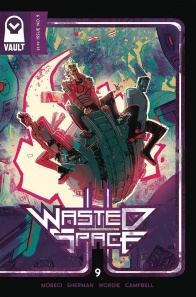 Strap into your seats, because it’s all about to get wild as the penultimate issue of Wasted Space’s second arc comes in hot! Rich jerks! A pesky nuke! Cute, furry aliens! It’s all here!

Michael Moreci has been on a roll with “Wasted Space” for quite some time now. Merging a cruel interstellar setting with a gang of unlikely, oftentimes humorous protagonists, he fits in equal measures of scathing critique of his setting (hereafter referred to as his “world” despite it not being technically accurate) and a sense of enjoyment within it nonetheless.

On the whole, the story of “Wasted Space” #9 delves deep into the harsh truths of life as the series presents it through the perspective of one of the wealthy higher-ups of Moreci’s world: a social Darwinist dog-eat-dog society in which the strong will always look to make themselves stronger by making those less fortunate than them weaker. Essentially, “Wasted Space” presents a world of bullies, coupled with what happens when the “weak” are pushed too far and lash out at their apparent “superiors.”

The theme is first shown with the silent, extremely violent tale of the “cute, furry aliens” mentioned in the solicitation. Without a single word or sound in the script, the rule of an apparent king is cut short by sudden nightmarish violence, only to immediately turn back to business as usual. The entire scene would be horrible to behold, but the sheer speed of the whiplash between one mood and the next makes the presentation into a pitch black comedy with how the violence can so quickly turn back to calm, cutesy happiness, not unlike the Killer Rabbit of Caerbannog from Monty Python and the Holy Grail.

Unlike his comparable protagonist in his novel Black Star Renegades, Moreci’s Billy Bane is by no means a hero, though he isn’t a villain either. He does what he does to try to make a difference, but none of this inherently means he is a good person. He hates being the “chosen one,” is loathed throughout the setting, has an apparent death wish, and hates peanut butter. He’s also not a bad person, since unlike many, he is trying his best to fix the system, even if he is doing so kicking and screaming the whole way due to Dust and Molly’s input. His means are extremely hostile, and definitely deep into antiheroic archetypes, but what makes his rebellion at least somewhat different from the others before it is a key element of his own personality: he just doesn’t care about much of anything.

Through this apathy and asocial behavior, Moreci examines a pretty interesting part of the heroic “chosen one” character as a whole. What if the hero, rather than want to change the world on its own, just wanted to have even the slightest bit of anything for himself and be left alone so people would stop bothering him? What if he didn’t want to rule over anyone, nor was he in any position where anyone else would want that either? Our apparent principle antagonist of the issue says that people continually take things in order feel secure against an uncertain tomorrow, leading to conflict and a hierarchy as a result. But what if the person who wants to break the hierarchy isn’t trying to come out on top, but to excise himself from it altogether? What if he just doesn’t care anymore? That kind of anomaly can, through his very lack of care for what happens afterwards, be the one to actually change things.

As with before, Hayden Sherman’s artwork brings an intentional roughness to the panels of “Wasted Space” #9 in his artwork, but there is something more to it this time around. Rather than just be rough in general, he makes use of a multitude of techniques to sow a particular response to the entire piece. For example, three panels are repeated in a nine-by-nine grid, with only minor changes between them, when discussing the unchanging nature of the setting from a sociological perspective. The repetition shows both an air of futility and one of aggravation with an inability to change things going forward, on top of showcasing the speaker’s own nihilistic viewpoint with respect to any ability to make real change beyond an accumulation of resources. By a similar token, the several pages in a row of the fuzzy aliens have only some minor changes between them until the shocking twist, giving a very “business as usual” effect to life that is unceremoniously shattered.

Jason Wordie’s colors further enhance the messages put forth by Moreci’s writing and Sherman’s illustrations. With small changes in color in the aforementioned scenes of futility, an appearance of a passage of time in days is showcased without a need for any introduction to a time skip. Faces can turn from saddened to horrified to angry to outright homicidal and many more with simple changes in the color palette, especially evident in the bloody massacre in an early scene as contrasted against its immediate preceding and succeeding pages, leaving an impression while the story itself seems to indicate that the cast is completely unaware that nothing can be quite the same as it was before said horrifying death.

Final Verdict: 8.5– Presenting apathy and asociality as a possible means for a chosen hero to alter a system, “Wasted Space” #9 paves a bold and interesting way forward.