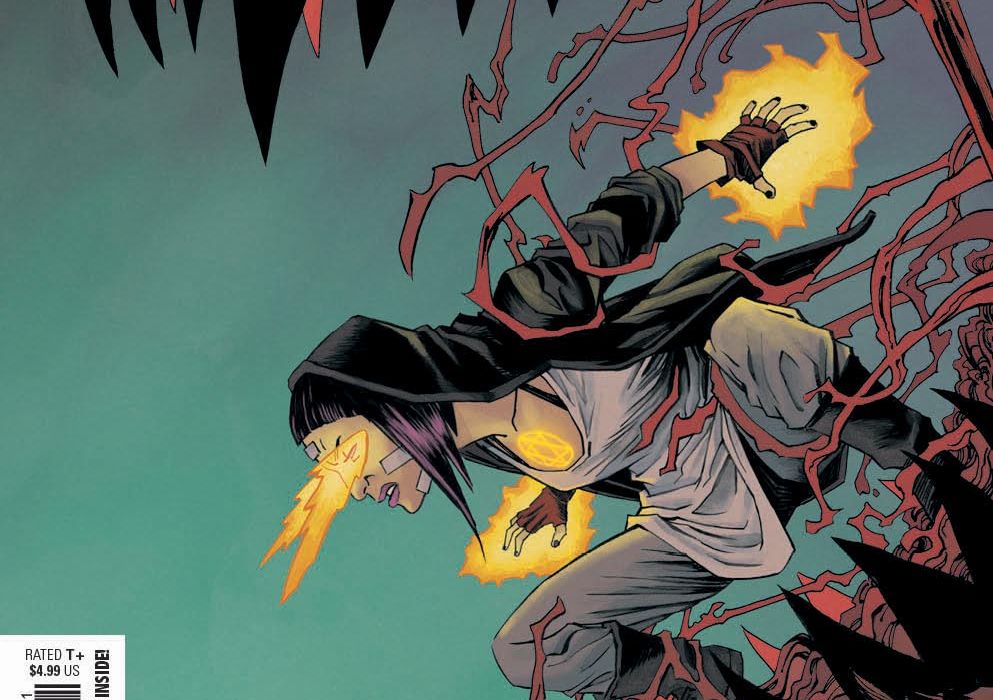 A summoner of demons and the servant of a god clash in this prelude to “Absolute Carnage.” 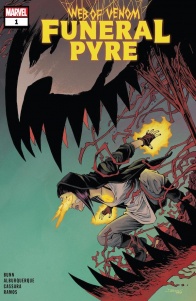 For weeks, the serial killer called Carnage has been hunting former symbiote hosts and killing them. Next on his list is ANDI BENTON, formerly MANIA, who’s back to living in Philadelphia and without any symbiote to save her…The path of bodies that leads to ABSOLUTE CARNAGE continues here!

At its core, “Web of Venom: Funeral Pyre” is a horror story. However, horror can come in a variety of different forms, and Cullen Bunn does not seem as though he wants to settle on any single one of them, as many an effective user of the genre before him. Running the gamut from suspense and restraint to gore and excess, Bunn combines elements of horror tales ranging from psychological to splatter to religious in nature, at times leaning toward a slasher film type of plot in order to create an unusual superhero story about two monstrous beings: a benevolent user of hellfire and demons in a desperate struggle for her life against the malevolent apostle of an ancient god.

In a short time, Bunn brings us up to speed on who Andi Benton is for those who don’t know her, making for a very accessible story. Her tale is one of phantom pain on the surface, but readers who have been paying attention to Donny Cates’s run on “Venom” will recognize her “phantom limb syndrome” (or is it “phantom sym syndrome?”) with regards to the Mania symbiote as quite a bit more than she believes. The intentionally (from a narrative perspective, rather than in-world) inaccurate self-diagnosis, coupled with a variety of symptoms that could actually be misconstrued to be in line with said syndrome help to foster sympathy for Benton, especially as her hallucinations with regards to the return of Mania lead her to alienate those around her, from friends to coworkers, in effect being a worse influence on her life than the Hell-Mark on her chest. When the influence of Hell itself is less hostile than something, clearly the protagonist’s life has gotten out of hand. And that’s aside from the symbiote serial killer (both in the sense of being a serial killer wielding a symbiote and being a serial killer of symbiotes) who comes to town and ups the direct, visceral horrors outside of hallucinations.

Bunn’s use of hallucinations to tell the story of “Web of Venom: Funeral Pyre,” including repeated scenes in slightly different contexts, help to desensitize the reader to the world around Andi Benton, making Carnage’s eventual appearance all the scarier. When so much is imagined, so much being taken for granted or seen as fake scares, it comes as even more of a shock when the most violent death in “Funeral Pyre” is not a hallucination, leaving readers in as much a state of disbelief as Andi herself until the effect is blindingly obvious.

In spite of all of this terror, the events of “Web of Venom: Funeral Pyre” effectively show how brave and competent Andi Benton truly is. It’s not that she is incompetent, but rather that she is ill prepared to deal with the quasi-divine nature of Carnage armed with the Grendel. The story’s momentary shift to a classic wacky superhero action scene helps to alleviate some of the stress of the story, only to drive the scares even deeper once it is over, helping to reinforce both Andi’s competence as a heroine in most circumstances and her need for help in this instance at the same time, examining why being incapable of fighting back effectively is not the same thing as lacking bravery.

From Alberto Jimenez Albuquerque to Josh Cassara, the illustrations on “Web of Venom: Funeral Pyre” slowly, intentionally degrade. Albuquerque uses a finer touch, the thin lines helping to bring the initial terrors Andi Benton faces into focus by way of making distinguishing her dreams from reality very difficult. The lines are well lain, fitting well into the relatively happier time before she goes out into the world and her “phantom sym syndrome” gets progressively worse.

On the other hand, Cassara’s artwork is slightly coarser and looser, though not in any extreme degrees. The overall effect seems to be an accentuation of the emotions inherent to Andi’s progressive mental fracturing as she fears for her mind and her life both, lighter pencils allowing for a heavier emphasis on lingering views of facial expressions. Cassara’s art stands out against Clayton Cowles’s continued, comparatively sharper lettering, giving the idea of Andi’s clearer ability to think becoming disconnected from her decreasing ability to focus on what is real in the world around her.

Jay David Ramos seems to integrate the changing tone of “Web of Venom: Funeral Pyre” into his colors, with a gradual, disturbing shift toward darker hues. At first, the artwork has a bright, natural coloration to it, showing how the world around Andi Benton is, while disturbing her, not inherently malevolent or dangerous. However, as the story goes on, darker colors, including heavier shadows, make the most of Andi’s terror when contrasted against the bright, oppressive light shining from Carnage’s orifices. The general effect comes across as if Carnage’s arrival is actually bringing the dark in and of itself, a disturbing implication for the coming “Absolute Carnage.”

Final Verdict: 7.75– Embracing horror while allowing newer readers to be reminded of who Andi Benton is, “Web of Venom: Funeral Pyre” acts as a fitting prelude to the “Absolute Carnage” horror crossover.