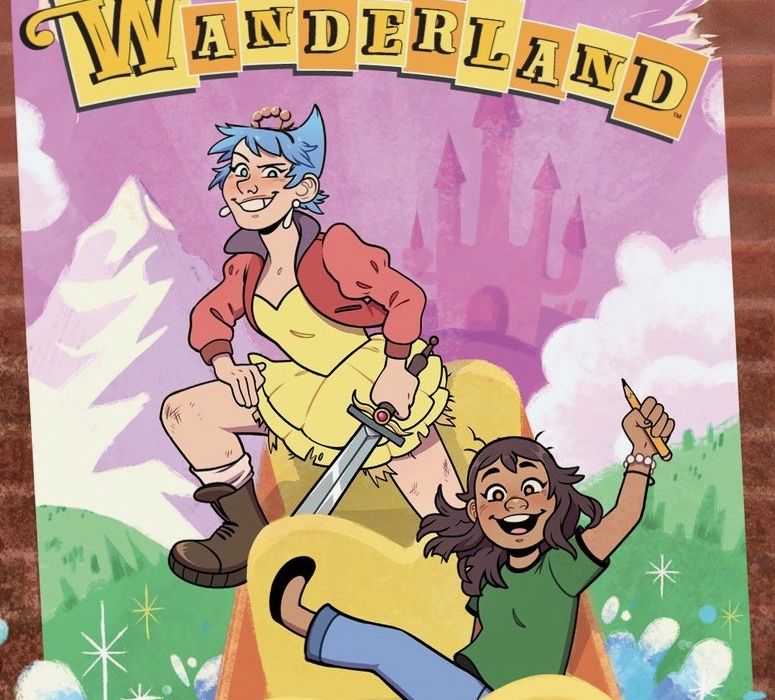 With a brisk pace and efficient structure, “Welcome to Wanderland” #1 launches right into the action, effectively pulling us into a story that feels thematically familiar but tonally unique. Quirky characters and an arresting visual style simply add to the fun. (Warning: minor spoilers ahead.) 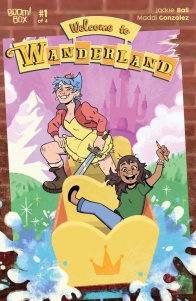 Bellamy Muñoz knows everything there is to know about Wanderland Park. She knows when all the most iconic rides were built, all the shortcuts around the park, and all the secret lore behind Old West Town, Space Age Metropolis, and New Princesston. So when she winds up in the REAL version of Wanderland, with real princesses and adorable talking woodland creatures, Bellamy is sure that she has GOT this…that is, until it starts to become clear that this magical land isn’t much like the real world park at all, and the characters she thinks she knows aren’t at all like she’d imagined.

“Welcome to Wanderland” #1 opens on a full page image of a map of the titular theme park in the hands of protagonist Bellamy Muñoz. At the bottom of the map reads a quote, attributed to the park’s founder and creator Borta Norling, the Walt Disney analog: “If you only believe what you see…you might miss something wanderful.”

As the story begins to unfold, we quickly learn that Bellamy, a theme park fanatic, is more than a little disillusioned with the general state of neglect and disrepair that has come to define the park. She complains of burnt out lightbulbs, underwhelming improvements to the rides and the soulless “corporate machine, thinking of their bottom line.” It’s an all too familiar charge, levelled against creative franchises across the board, in every medium, especially as the franchise ages and its fans mature, turning from innocent, wide eyed children into more reticent tweens and teens.

Thematically, we totally get it. As pop culture fans we’ve all been there before, standing at the emotional crossroads, unsure whether we can fully commit and blindly continue down the path of loyal fandom or simply turn and walk away, unable to keep glossing over the subtle flaws and disappointments we can no longer ignore.

Luckily for us, Bel is not yet ready to throw in the towel and stop being a fan.

Instead, after a comedic montage in which the phrase quoted above, “…you may miss something wanderful,” echoes over and over in our wide-eyed protagonist’s head, she zooms off to the theme park to find the newly discovered Easter egg she’s apparently missed all these years. Eventually, her persistence pays off and she opens a literal and metaphorical door that separates the real world from the world of her dreams. Naturally, the door soon vanishes without a trace and Bel finds herself trapped in a fantasy world that she only thinks she understands.

To be honest, it’s a well crafted plot, but nothing we’ve not seen before. Thankfully, writer Jackie Bell freshens things up with clever dialogue, a healthy dose of humor and quirky characters. In fact, the story really takes off when the tone decidedly shifts and a turkey drumstick flies through the window of the tower in which Bel is imprisoned.“What was that?” asks an offstage voice. “It sounded like some kind of meat-based grappling hook…,” comes the deadpan reply. Moments later, would-be rescuer Riot, a punkish blue-haired princess with a no frills tiara that doubles as brass knuckles and a magic shield, asks the mystified Bel, “You wanna get in on this turkey leg? There’s hardly any glass in it.”

Visually, Maddi Gonzalez’s illustrations also work to counter what could otherwise be the book’s overly earnest, “if you only believe in magic, you can overcome anything” theme. Princess Riot may wear a flouncy yellow dress, but she also sports Doc Martins and a traditionally boyish doublet. It’s a look that’s all her own, equal parts prince and princess, conspicuously accessorized with a meat-based grappling hook strapped to her side.

Gonzalez draws her characters’ faces with similar audaciousness, giving them large, expressive eyes and mouths that immediately command your attention. Like other Boom! Box series such as “Dodge City” and “Fence,” there’s a definite Manga-inspired aesthetic that permeates the book, giving many panels and pages a somewhat cartoonish, over the top ambiance that reminds us it’s all in fun. Frequent use of large, chunky letters underscores the point.

Nimali Abeyratne’s color work is equally arresting. The palette isn’t quite neon, but it’s definitely close, especially when we cross over to the “real” Wanderland. With dramatic purples and greens (literal secondary colors) vying for attention against Princess Riot’s primary colors (blue hair, yellow dress, red doublet), there’s dramatic tension on every page. The backgrounds are often subdued, but foreground elements pop, leaping off the page, despite minimal shading and detail.

Final Verdict: 8.3 – Ultimately, as the debut issue in a brief 4-part miniseries, “Welcome to Wanderland” #1 is a promising start. The world is well established, the characters are clearly defined and the plot is unfolding nicely. The foundation and framework are here. This series should be great fun.