Last week, I started my summer binge reviews of “Wizard: The Guide To Comics”. Today, I continue my look back at the mid 1990s with issue 54, cover dated February 1996. 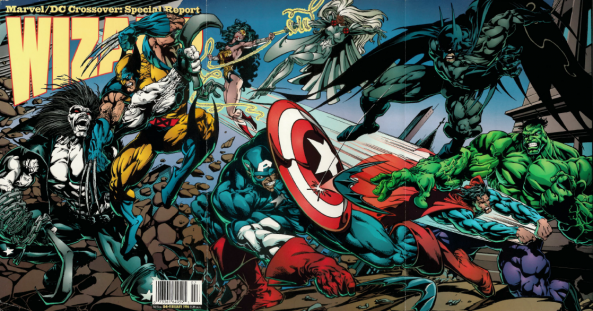 The Cover
This triple-wide monstrosity by Bart Sears was celebrating the “Marvel vs DC” miniseries that let fans vote on the outcomes of fights and gave us the forgotten gems from the Amalgam Universe. Sears was an artist Wizard routinely hyped, and as of this issue he had drawn more covers than any other artist. I can’t help but suspect the former was directly related to his willingness to do the latter. He was also the first artist to provide the “How to Draw” column, which ran for 15 issues or so. Looking at this though… I just don’t get the appeal.

The proportion for everyone looks off. The Hulk is supposed to be larger than everyone else I guess, but the combination of his size and his placement in the background makes him look the same size as everyone else, like he’s about to catch the Batarang. I’m pretty sure Batman is further away from the viewer than Captain America, but Cap’s holding the shield as though Batman were closer. What’s Hulk doing? He’s doesn’t appear to be reacting to anything Superman’s doing. What’s wrong with Lobo’s left leg?

I know, I’m putting too much thought into this overly muscular piece. Let’s move on.

The Marvelution Dies with a Whimper
As sales slumped in 1994, management at Marvel felt pressure from stock holders to show they were taking action. Their solution? The Marvelution! In October 1994, Marvel restructured its editorial staff to replace EIC Tom DeFalco with five people, each one overseeing a particular family of titles. This idea was met with lots of skepticism internally, and it showed signs of weakness immediately. By February 1995, editorial staff were being cut based on numbers instead of performance. In this issue of “Wizard”, a short item on the fifth page of the news section announced that X-Men EIC Bob Harras was being promoted to EIC of Marvel as a whole. Quotes from X-writer Scott Lobdell and an anonymous source were included to make the change sound positive and there was no mention of Marvelution.

Long Live Bill Watterson
A quarter page was committed to the final “Calvin & Hobbes” comic strip, which ran December 31, 1995. It ended with a comment from “Hagar the Horrible” artist Chris Browne saying “He’ll be back.” While I continue to await that return almost 25 years later, I find “Phoebe and Her Unicorn” to be a satisfying fill-in.

Iron Man – Younger and More Hip
Once upon a time, sales on “Iron Man” were down but no one knew how to turn the character around. Then, inspiration struck! Reveal that he’s been evil the whole time, then replace him with a younger version of himself. It was received so poorly that it was soon wiped from existence in one of those universe-altering events. Still, it’s a story Kevin Feige and MCU screenwriters might want to look into.

Features
Immortal Combat – a highly positive review of the first year or so of “Preacher” with commentary from Garth Ennis and Steve Dillon. I never cared for the series, but I think this article would effectively sell the series to readers who would appreciate the boundary-pushing content.

Risque Business – a look inside “Penthouse Comix”, a humor/porno comic from the publisher who brought you “Penthouse”. Apparently, it was pretty easy to get artists on board for this series. I’m not sure how representative the excerpts are, but I’m now genuinely interested in finding a copy.

Letter Perfect – Todd Klein walks you through the seven steps to lettering. But really, all you need to know about lettering is here.

War of the Worlds – A four page interview with the editors behind “Marvel vs DC”. This was really disappointing. Instead of meaty questions about how the series came together or how the creative team worked, it was just letting the series editors argue about the match ups.

Mutant 90210 – A four-page behind-the-scenes look at the made-for-TV Generation X movie. This had some neat coverage that was conceptually what I wanted from the previous article. Everyone involved was excited about the production and there was an expectation for sequels or a TV series to follow and expand the universe. Too bad it wasn’t that great.

When Titans Tussle – Five pages of “who would win” dream fights featuring characters from various publishers. Fan wankery at its finest.

Krash Course – Greg Capullo’s How-To column for artists. This one continues the theme from last issue looking at non-standard panel layouts. Informative and interesting, even if you have no intention of trying to draw.

Manga Scene – An inside look at the 1995 film Ghost in the Shell. I’ve never seen this animated feature, but reading the article reminded me that I’ve always wanted to.

Trailer Park – Hollywood and TV news. Some potential casting decisions lead to really neat cases of “what could have been”. Patrick Stewart was a front runner to play an Animated Series-esque Mr Freeze in Batman and Robin before director Joel Schumacher saw Kelly Jones’ re-imagined version of the character in the “Underworld Unleashed” storyline that gave us Arnold Schwarzenegger. Meanwhile, Chris O’Donnell was set to play Agent J in Men in Black alongside Tommy Lee Jones, but he bowed out after the success of Batman Forever to avoid being seen as a perpetual sidekick. 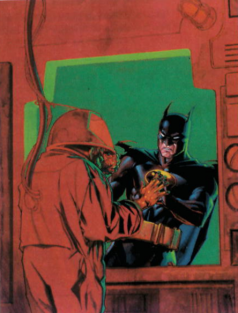 New Comic Picks
The top five picks for the month were led by “X-Men” #50, a lead-in to the upcoming Onslaught saga. Writer Scott Lobdell said it would introduce Post, a villain he promised would become the X-Men’s Galactus. The first issue of the Alan Moore-penned “Spawn / Wildcats” miniseries, the beautifully covered “Batman: Shadow of the Bat” #48, the final issue of “Sandman”, and the zero issue of “Ash” rounded out the rest. Of the five, I think “Sandman” was the only one with any real staying power, but I bet there are fans out there who have fond memories about the X-Men and Batman picks. I’m not sure the other two were anything more than flashes in the pan.

Market Watch
“X-Files” was still popular, and the “Marvel vs DC” mini was successful as expected. The Black September event from Malibu raised interest in the Ultraverse at the time, but the entire line would be dead by the end of the year. Peter Parker being replaced by Ben Reilly went over poorly and retailers reported zero interest in any of the titles starring him, which was blamed on confusion among readers about what was going on.

Price Guide
In addition the standard price guides for comics, toys, and trading cards, this month included an experimental price guide for autographs. It came with several caveats, but the basic idea was that the dollar amount next to a creator’s name represented the premium a signature would add to a comic’s regular value. Most were between one and three dollars, but a few artists could raise the price by triple digits: Steve Ditko (+$100), Bill Everett (+$150), and Joe Shuster(+$200). I don’t know about the dollar amounts, but those are pretty good choices for the top contenders. The most valuable writer’s signature was Jerry Siegel at $20, followed by Stan Lee and William Shatner at $10.

Bart Sears Profile
In this era of “Wizard”, each issue ended with a profile of an industry personality. They had one column of prose biography material and one column of answers to a regular set of questions. This month spotlighted Bart Sears, and his answer to “Favorite work of your own” was “I don’t have one. I generally hate everything I do.” That brings this column full circle, and seems like a great place to stop.