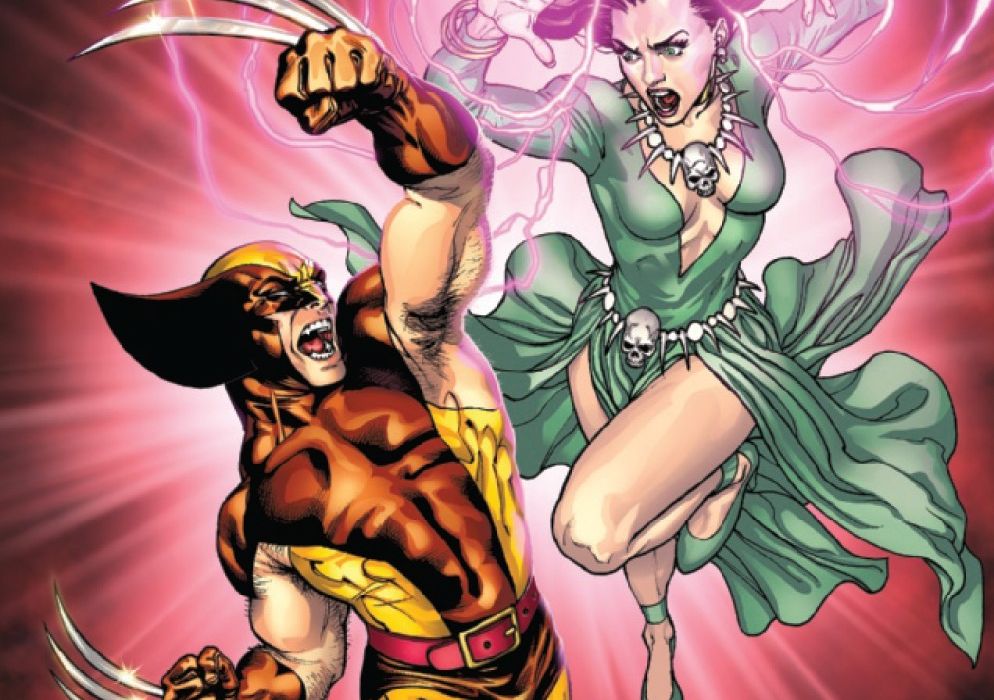 Wolverine. He’s the best there is at what he does, and what he does is appear in a lot of comics. Remember that time when he was on about a half-dozen Avengers and X-Men teams at once? But there’s always time for another solo story, which brings us to the 2019 “Wolverine Annual.” 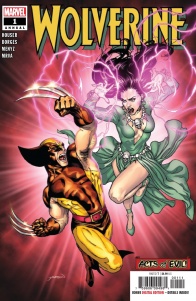 WOLVERINE BATTLES THE MAGIC, MYSTERY AND MAYHEM OF MORGAN LE FAY!
Wolverine’s lived many lives – X-Man, Avenger…movie star? Not exactly. But he’s followed an aspiring young actress to Los Angeles for a little sunshine and some semblance of a normal life. But behind the gilded golden façade of 1930s Hollywood lurks an unholy cult led by MORGAN LE FAY. Their prey…the young Hollywood hopefuls – including Logan’s lady! Will the mighty Logan’s claws crumble under the onslaught of the arcane sorceress’ magical powers? Find out this September!

Being a constantly-regenerating near-immortal, Wolverine has been around for a long time. We’ve seen the occasional flashback to the role he played in wars and other historical events, but this issue includes reflections on a time he was just trying to live his life.

Naturally, violence ensues and lifelong regrets follow. It turns out that not only can Wolverine not escape his past, he can’t escape his future either.
… Aside from all the times the X-Men change the future, but that’s beside the point.

Rather than focus on Wolverine’s role as a hero, a member of the X-Men, or even his time in the Weapon X program, “Wolverine Annual” is a more personal story. It begins with a focus on an old flame, what it means to see other people grow old and age away as he remains unchanging, and personal conflicts involving betrayal and identity. Logan wants to make amends, to close old wounds once and for all. Sometimes, though, closure can be a one-way thing.

At the same time, the comic uses the flashback narrative to lead into a bit of good old fashioned superhero conflict. A little time travel, some possession, evil rituals, and Wolverine slashing his way through whatever’s in his way. The comic brings in other aspects of the Marvel universe, such as a quick team-up with Spider-Man and a look at some of the most fearsome foes in Marvel, without compromising the fact that this is a story about Wolverine.

It manages to balance the character and action-driven elements nicely. Each one leads into and feeds the other, maintaining a good story flow throughout.

Writer Jody Houser also manages to keep one or two nice twists in there along the way. We see the story from Wolverine’s perspective, but we’re still with him as he learns new information about it long after the fact.

Geraldo Borges provides the artwork, which has some ups and downs. The action scenes are excellent, with fluid motion and plenty of debris from every impact. When Wolverine is locked in an internal battle against illusory foes, the use of long but thin wavy panels, fading away instead of using borders, adds to the ethereal and mental state of the combat.

When Wolverine literally cuts through the mental spell he’s trapped in, the very darkness on the page seems to shatter as though he’s slashing and smashing his way out of the page.

On the other hand, the character designs feel a little misshapen, particularly Wolverine’s nose of all things. Characters’ faces don’t always have consistency; not enough to detract from the comic, but enough to notice. The expression work comes across as somewhat subdued, with decent subtle touches but only a few moments that are particularly emotive.

That’s not to say the artwork is bad overall. It suits the tone of the comic nicely, especially with how colorists Marcio Menyz and Miroslav Mrva adjust the contrast and color schemes in Wolverine’s flashbacks to make them nicely stand out from the moments in the present. There’s a lot of little touches that go into many of the panels, like when Wolverine is covered in shards of glass or the details in the Hollywood set. It’s just noticeable when Spider-Man’s mask is 50% eyes, and they seem to be centered at his cheeks.

Small issues aside, “Wolverine Annual” is a good one-shot that focuses on Wolverine’s character in a way we don’t see too often. It’s a more personal look at his past and life before he learned what it means to be a mutant, and how he was fighting super-villains before he even knew what an Avenger was. It’s an enjoyable comic for any Wolverine fan.

Final Verdict: 7.2 – An enjoyable and well-written look at Wolverine’s character and past, balancing the past and present nicely. A great one-shot for fans of the character.