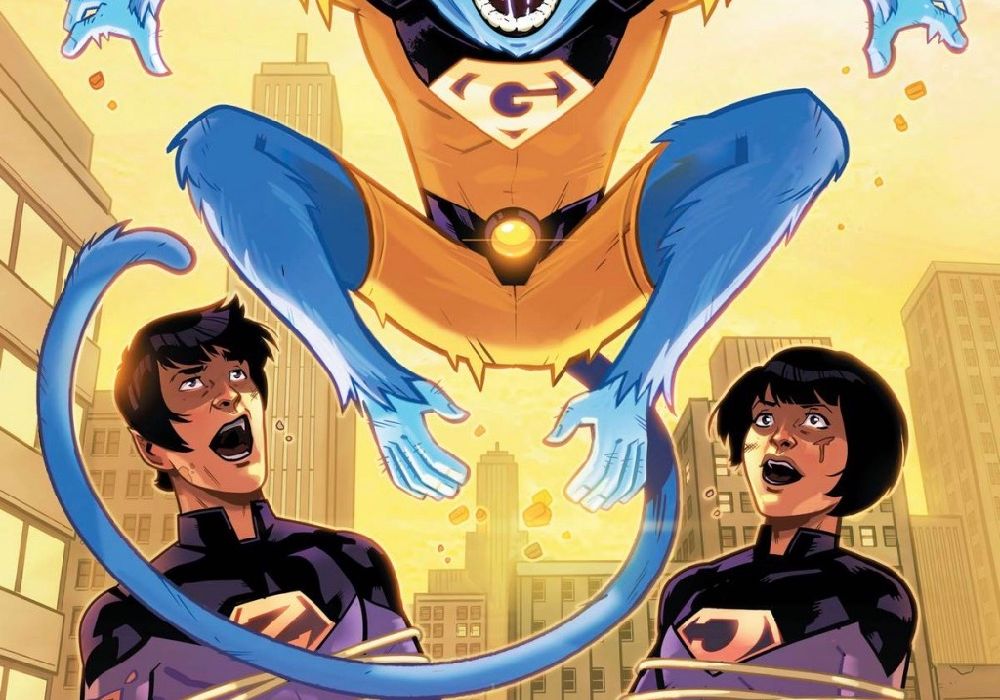 If you love episodic series with issues that feel self contained, “Wonder Twins” #3 excels, with a solid script and outstanding art. (Warning: minor spoilers ahead.) 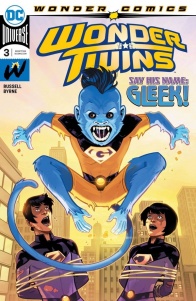 Exiled from their homeworld and still trying to adjust to life on Earth as normal teenage high school students and interns for the Justice League, Zan and Jayna find themselves attacked in their own home by the League of Annoyance. Now separated and unable to use their amazing powers of transformation, the twins find themselves forced to rely on Zan’s new pet monkey Gleek for help—but does the plucky purple primate even like his new owner enough to give a monkey’s butt about these young heroes?

In the second scene of “Wonder Twins” #3, Jayna grapples with a moment of existential crisis. Superman has dropped by – with a celebratory fruit basket, no less – to personally congratulate the Twins on the successful completion of their first official mission as interns at the Hall of Justice. Slumped over the table and feeling deeply conflicted, Jayna is too despondent and full of self doubt to even mark the occasion. Her mind is on much bigger concerns.

“How do you do it, Superman?” she wants to know. “How do you come to this planet as an outsider…see all the problems this world has…and convince yourself that you’re making any difference whatsoever?”

It’s a weighty and vital question, especially for an all-ages book. Without missing a beat, much less talking down to his young charge whom he brought to Earth in the first place, Superman responds with refreshing candor. “On Earth, the most important power you can have isn’t shape-shifting. It isn’t flight or strength or…invulnerability. It’s seeing everything wrong with this world…and somehow not going crazy.”

Visually, as Superman these words, his eyes are uncharacteristically downcast and his face and body remain in shadow. Behind him, on the giant computer screen, a series of disparate images flow by, creating a nonlinear montage of fire, tears, an anguished face, a battle tank, a rubber raft overloaded with migrants and what appears to be a police officer or security guard beating someone with a billy club. It all feels a bit raw and intensely topical, yet far from melodramatic. These are images “ripped from the headlines” in 2019.

In stark contrast to this poignant scene, much of the rest of the book centers on a ragtag collection of B-squad villains known as the League of Annoyance, briefly introduced in the previous installment, and their continuing “Mayhem Initiatives.” Intriguingly, they are joined in this issue by a scientist named Filo Math, father of Jayna’s classmate Poly Math, who’s trying to break free of his LexCorp contract, but finds himself prisoner to the fine print. Oh, and there’s also a bicycle-riding former circus monkey named Gleek whose image happens to dominate the book’s front cover.

Clearly, there’s a lot going on here, but it never feels claustrophobic, gratuitous, or needlessly ambitious. In fact, it’s really well balanced and generally easy to track, even with all the moving parts and multiple layers. Once in a while, scenes get a little bit choppy, with transitions that feel like jump-cuts, but the narrative thread reemerges quickly to get things back on track. No doubt, Writer Mark Russel’s script is consistently funny, with plenty of great dialogue, clever quips and moments of slapstick humor, but it’s also not afraid to address more significant themes and thornier issues such as the prison industrial complex and what justice actually looks like.

Stephen Byrne’s illustrations and colors are also top notch. His outstanding paneling and page layouts lay the foundation, while his character designs and compositions are intuitive and energetic – not overly ornate, but with plenty of interesting detail and straight-up eye candy. There’s a lot of purple and green, which gives the book a great dynamic and built-in dramatic tension, as well as plenty of cool blues and fiery yellows juxtaposed against each other.

Three issues into the series, the biggest weakness, perhaps, is the lack of urgency. In many ways, Russel’s scripts feel more episodic than serialized. There is an underlying continuity, without question, but it’s almost more thematic than narrative. None of the issues has ended on a true cliffhanger, and issue number three is no exception. The bad guys have been thwarted, the heroes are safe and sound, no burning questions remain. In fact, if anything, there’s almost too much resolution. The story feels complete and self contained. It’s well done and quite entertaining, but not begging us to come back for more. Perhaps as the series continues, longer and more complicated, truly serialized stories will emerged, but for now it feels like a series that you can leave and rejoin any time without really missing anything.

Final Verdict: 7.6 On a technical level, “Wonder Twins” #3 is very well done, touching on important themes while also leaving room for plenty of humor and action-packed story. As a series, however, there’s not yet a major hook or feeling of urgency.