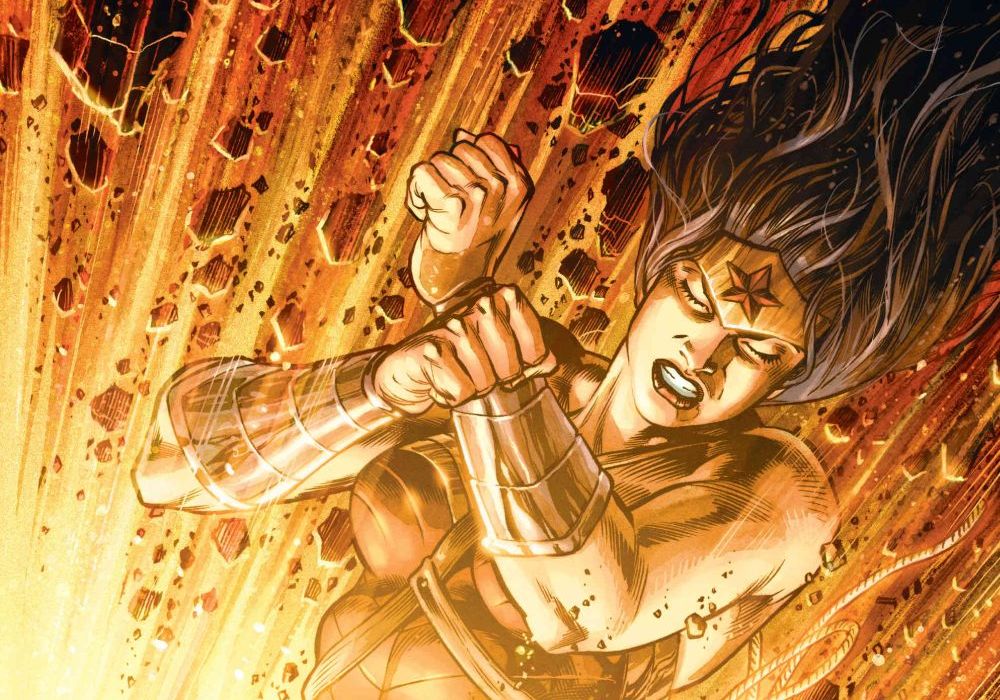 With the Wonder Woman character as hot as she’s ever been, the new creative team offers up a solid first outing as they launch brand new arc that continues to explore the softer, more human side of a battle-hardened but emotionally exhausted Diana Prince, still reeling from the chaos of recent events.

“HEART OF THE AMAZON” part one! Writer Shea Fontana (DC SUPER HERO GIRLS) steps in for a new story! Wonder Woman finally takes a moment to catch her breath and attend a friend’s wedding…but unfortunately, horror’s followed her even there!

Following Greg Rucka’s incredible 25-issue run won’t be easy, especially a mere two weeks after the masterful double-sized finale that expertly wove together several disparate storylines and pretty much tied them all up in a bow. Wisely, rather than fixate on the transition from one creative team to the next, writer Shea Fontana and artist Mirka Andolfo simply dive into the action, launching a new arc without prologue or exposition. Instead, right at the top of page three, after punching a predatory creep so hard in the face that he sails through the air, Diana says (via internal monologue), “These days, I sleep in helicopters and wake up in war zones because I want to bring peace.” And that right there is enough to convey the emotional burden she carries, the betrayal she’s still processing and sheer enormity of her endless task as a warrior for truth and justice.

From there, the story is deceptively simple and straightforward. In flashback, we see a young Diana give up her treasured doll to prove her bravery and toughness. In the present, we see Diana reconnect with her dear friend Etta Candy, undergo a physical and attend Candy’s brother’s wedding. In truth, not a whole lot happens, but every step of the way Fontana either continues to pull back the curtain and subtly plumb the depths of what it actually means to be Wonder Woman (talk about work/life balance) or introduce intriguing new subplots (the sudden appearance of fanboy James from Mega Ultatech and Dr. Crawford’s interruptive coughing fits as she performs Diana’s check-up, later vowing to stay up all night, if need be, to complete “priority bloodwork” for the Pentagon), leaving us with a pulse-pounding cliffhanger that almost guarantees we’ll pick up the next issue.

Despite the seeming lack of action (Wonder Woman throws but a single punch the entire issue and even that happens off stage), it’s incredibly efficient storytelling. Not a single panel is wasted. Especially when it comes to exploring Diana’s complex emotions. Andolfo renders Diana’s facial expressions and body language brilliantly, revealing with a few simple lines Diana’s internal struggles. We see her as a young girl fighting back tears or turned away on her side, trying to be courageous, but feeling sad and alone instead. Later, in the present, as she insists that she feels fine and doesn’t need any time off, we see her eyes downcast or her shoulders slumped, trying to act invincible but feeling incredibly vulnerable.

Similarly, Romulo Fajardo, Jr.’s colors add layers of subtlety, nuance and texture that help to ground the story in a universe that’s very real and complex, congruent with Diana’s emotions. In fact, rarely do Fajardo, Jr.’s panels feature solid fields of color. Instead, there is a constant interplay of light and shadow. The general’s high tech offices feature smooth, glossy, almost mirror-like surfaces primarily rendered in cold steel greys and blues that feel detached and unforgiving. In contrast, the flashback scenes in Themyscira – which feature lots of yellows, whites and burnished golds – feel practically comforting and cozy, despite the coarse, earthy textures and cracks in the walls and pillars. Everything looks and feels ancient, but it’s Diana’s home, viewed through a lens of nostalgia, longing and loss. It’s not dilapidated, just incredibly distant and out of reach. Much like Diana herself, who seems to be isolating despite her half-hearted attempts to socialize at the wedding. There’s a sadness in her eyes that just won’t go away.

It’s poignant, powerful stuff, especially in combination with Diana’s unrelenting sense of duty and obligation. Even at the wedding reception she jokingly uses the word “mission” and says that she’ll remain at the table to “stay on the lookout.” She’s trying to lighten up, but the work of a superhero never ends and clearly it’s wearing her down. Then suddenly, in a brilliant last-page reveal, Diana’s fears come true and her wariness is validated. But even then she doesn’t react with shock or fear or even spring selflessly into action. The look on her face instead is one of battle-hardened weariness and emotional fatigue. After everything she’s been through, she may have finally hit the breaking point.

Rucka and the rest of his creative team experimented with and bequeathed us a more vulnerable, more human, more relatable Diana Prince. Shea Fontana and Mirka Andolfo have quickly taken advantage of this fact, crafting a technically simple chapter with many, many layers. It will be interesting, indeed, to see how Diana picks herself and heeds the call to battle – or not. Either way, Wonder Woman seems poised for another compelling storyline.

Final Verdict: 7.5 – Technically proficient on every level, “Wonder Woman” #26 continues to peel back layers of Diana Prince’s complex psyche while also dropping some interesting clues about new potential subplots. It’s a solid first outing for the new creative team, for sure, but the bar is set very high and there’s a long way to go.