Is there a character in all of superhero comics that has had a better 2017 than Wonder Woman? Between the highly successful film, the Greg Rucka/Liam Sharp/Nicola Scott/Bilquis Evely run wrapping up, “Bombshells” returning, and the general awareness of the public that Diana deserves to be in the highest echelon of heroes, 2017 has been all about breaking new ground for Diana.

For that reason, it is a bit odd that we are getting six months of a story that started pre-‘Rebirth,’ dealing with some continuity that isn’t exactly new reader friendly. That said, giving the book to a high profile writer returning to DC after a 4 year absence and giving the title a storyline that spun out of the mind of the company’s Chief Creative Officer shows that Diana is still a priority for DC.

Be warned that spoilers for this first chapter follow. 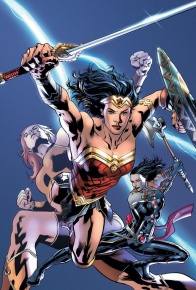 “Children of the Gods” part one! Spinning out of the pages of DC UNIVERSE REBIRTH and JUSTICE LEAGUE: DARKSEID WAR, legendary writer James Robinson (JSA: THE GOLDEN AGE, STARMAN) comes on board to answer one of the biggest questions of the year: Who is Wonder Woman’s brother? Taken away from Themyscira in the dead of night, the mysterious Jason has been hidden somewhere far from the sight of gods and men…but his life and Wonder Woman’s are about to intersect in a terrifying way, bringing them face to face with a cosmic threat they never imagined! Don’t miss the start of the next great Wonder Woman epic!

This issue was a bit of a bittersweet experience for me. As anyone who has followed me on this site for any stretch of time can tell you, I’m a huge James Robinson fan. His departure and return to DC is a big deal, and is something worth celebrating. What halts that celebration is that he is, essentially, writing someone else’s story.

There’s a lot of presumption in that sentence, but this story has the fingerprints of Robinson’s old co-writer Geoff Johns all over it. Grail, Jason, and Baby Darkseid all showed up in “The Darkseid War,” the Johns-penned climax to the New 52, and the unofficial prologue to this story. Aside from a throwaway line that connects the Rucka run to this issue, this could easily have been “Wonder Woman: Rebirth” #1.

Now, that isn’t to say that Robinson doesn’t do good work on this issue, because he does. The first half of the issue, in particular, shines, as he creates a very simple, very comfortable life for “Paul,” a lumberjack who lives on the edge of a rural community in Oregon. It isn’t until Grail attacks that we find out that Paul is actually Hercules, demigod and half-brother to Diana. This is a bit of a misdirect by Robinson, as we have been told this arc focuses on Diana’s twin brother, Jason, and so we are waiting for “Paul” to drop the charade and reveal himself, but when he does so, he does so as a completely different character.

It is not entirely clear which version of Hercules we are getting here – the fact that the “Hercules Unbound” logo appears in his speech bubble suggests that this isn’t the same Herc who was originally responsible for enslaving the Amazons, but rather the future, displaced in time, hanging out with characters from “Kamandi: The Last Boy on Earth” Herc from the “Unbound” series. It would not be the first time that Robinson took an unexpected and oft forgotten iteration of a character and brought them back to the foreground.

Grail is hunting the children of the old gods to feed her father, a new god, and allow him to be restored to adulthood. This is a very fun, and very comics, idea, and will give the book some natural momentum and purpose, even if it means that we may lose some of the old gods walking around the DC Universe.

Once Robinson shifts the focus of the issue to Diana, the book begins to feel quite different. Quickly, the new characters and unfamiliar settings are replaced with Diana and Steve fighting Giganta, one of Wonder Woman’s most iconic foes. Hell, Steve even calls her “angel,” a nickname that was his common pet name for her in the Golden and Silver Age – this instantly feels like a classic Wonder Woman story. The juxtaposition of those two areas: the Johns-penned, late New 52 stuff, rubbing up against the classic, traditional Wonder Woman, is an interesting place for the story to go, and not necessarily what I expected.

But it is when the idea of Robinson on this story started to click for me. Robinson has always had one foot in the Golden Age and one in modernity, and so it makes absolute sense for him to bridge these different worlds, and give us something new from the results. While I still wish that Robinson were able to have carte blanche upon his return to DC, this may fit him better than I feared.

Carlo Pagulayan has been doing quality work for DC and Marvel for a number of years now, but this is the first issue that I can recall him being so obvious with tailoring his facial work to known actors. Gal Gadot is clearly his inspiration for Wonder Woman, which isn’t a surprise, but Paul is clearly modeled after Joe Manganiello, to the point where it was distracting at times to see these ‘familiar’ faces pop up. He’s not quite Greg Land but I wish he would allow himself a little more freedom in his facial work.

In fact, this may be the stiffest I’ve seen Pagulayan’s work, not just in facial features but in general. Again, there are far worse examples of artists posing instead of creating movement, but this feels far less fluid than I recall his work in the past. We get a few fight sequences that don’t feel as epic as they should, due to how they’re drawn.

Romulo Fajardo Jr.’s colors really do a lot of heavy lifting here, transforming Jason’s rural home into a literally darker place when Grail shows up, and then going full technicolor when visiting Diana. While her costume still retains the sheen and hue of the film, the world around her is not the desaturated greys that Wonder Woman trafficked in. Fajardo echoes Robinson’s classic tone in the second half by giving the pages vibrant blue skies and lush green trees.

Overall, this issue is a nice start to the arc, but is a little too decompressed to take a hard stance on. Sure, I wish the art were a bit looser, and I hope that Robinson can be the writer to give Trevor something to do for once, but I can’t really condemn the issue for being anything other than a standard start to an arc. I also can’t praise it too heavily, as it just didn’t leave too much of an impact on me. I enjoyed it, and further readings gave the issue more depth, but this is clearly the first course of a larger, more filling, adventure.

But for Robinson, the man who revived the JSA, created New Krypton, and handled legacy in “Starman” in such a spectacular way, this feels a little like a soft-opening for his return to DC. Let’s hope the next one kicks the doors in.

Final Verdict: 7.3 – A measured, though not entirely memorable, opening of the “Children of the Gods” arc.