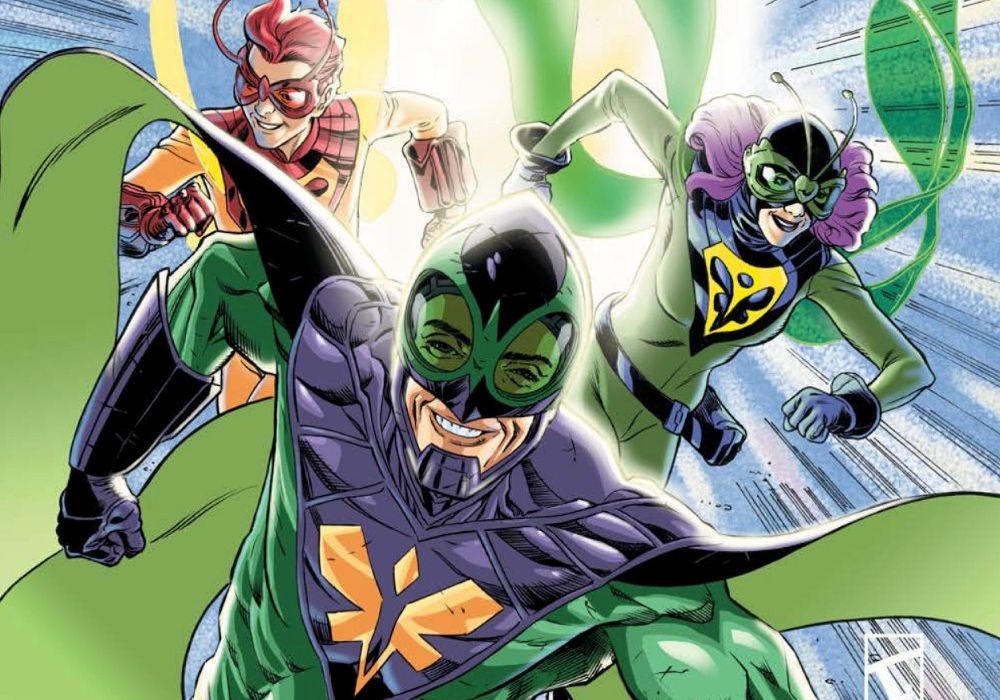 Imagine what would happen if you took a character from the “grim and gritty” Dark Age of comics, then had him swap places with his Silver or Golden Age version. Actually, you don’t have to imagine that, because that’s what “The Wrong Earth” is all about. But now imagine if that same Dark Age hero wound up in a world straight out of “Archie,” and you’ll get “The Wrong Earth; Trapped on Teen Planet.” And that concept alone should be enough to get you invested. 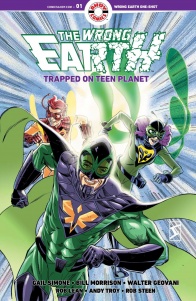 The first of five unique one-shots building and expanding on the world of AHOY’s The Wrong Earth, by some of the biggest names in comics! First off: superstar writer Gail Simone contributes an extra-long story as grim and gritty vigilante Dragonfly is whisked to an alternate Earth of teen-agers, malt shops, love triangles, and school dances! Will this innocent world soften him? Or will his violent methods poison it? Featuring variant covers by Dan Parent (Archie) and Gene Ha (Top Ten, Mae).

If you haven’t read “The Wrong Earth,” you’ll be coming into “Trapped on Teen Planet” a little blind, but that is absolutely not a problem. The recap page tells you everything you need to know going into the story, but the points are reinforced by a goofy (yet entertaining) caption narrator character. In fact, the narrator continues to provide no shortage of zany meta commentary throughout the issue, for added fun.

As for the story itself, the concept is incredibly fun: a superhero from a dark and edgy comic switches places with his lighter and cheesier counterpart from another universe, hijinks ensue. But “Trapped on Teen Planet” takes it a step further, by then pulling that hero and his companions into yet another universe that’s basically “Archie” in every way – the art style and setting match perfectly, while the characters are all blatant parodies of the Archie gang. And I say that in the best of ways.

So while the characters have to find their way back from this bright and cheery world of a fictional era long past, the hero Dragonfly also has his own internal struggles against nostalgia and the desire to stay in this peaceful world.

That’s the general plot, which then begs the question: how well does it play out?

Well, it’s written by Gail Simone, which is a good sign right off the bat. Gail’s sense of story, dialogue, and humor carries throughout “The Wrong Earth: Trapped on Teen Planet,” keeping every line of dialogue entertaining and every story beat moving at a great pace.

And of course, the comic plays with the old tropes and formulas of “Archie” comics nicely. Every character has their archetype, which can be summarized in one sentence. In fact, the comic does just that, and it tells us all we need to know about the characters.

We’re also given a good amount of time to explore this world, meet its cast, and see why Dragonfly might not want to leave. It sets up some decent character exploration, even when so many characters are intentionally cheesy.

Also, the fact that the talking dog is clearly swearing every time he says “rowf” just never gets old.

So, the writing? Top notch. How about the art?

Well, the comic is set in multiple worlds, so it has multiple artists covering the different styles it creates. When Walter Geovani handles the Earth-Omega and Earth-Alpha scenes (with Rob Lean providing the inking) we get some wonderfully clean comic art with strong line work, character designs, and detailing. It’s as though they wanted to make the most traditionally “comic book” style artwork possible, and they succeeded wonderfully.

Each page is filled with some expertly composed scenes, whether it’s a dramatic pose or an action shot. Even the more ridiculous moments, like Stinger pulling out a comically oversized gun, look great.

Then, when the characters enter the “Archie” style world, Bill Morrison takes over as artist. His style perfectly mimics the style of Dan DeCarlo, a fact that the comic even points out in a line of dialogue.

I honestly had to go and check Bill’s portfolio to see if he’d drawn any “Archie” comics in the past, because it was that spot-on. And while he hasn’t done that, he has illustrated plenty of “Simpsons” comics, and even comics based on The Beatles’ Yellow Submarine, so he absolutely has the experience to hit this style.

The character designs, the scenery, the way they’re positioned and pose, even the way the characters hold themselves while dancing, all perfectly mimic the style of classic “Archie” comics. Even the thickness of the line work seems intentionally designed to copy that style. It’s clear that a lot of love went into the comic.

All this is helped by Andy Troy’s color work, which adds plenty of bright colors and depth to the imagery, making everything easy on the eyes. Once the comic shifts styles, so too do the colors match the world perfectly, switching up the lighting and brightness to match.

Now, the comic does only have one regular-length issue to go through the entire story, so the ending may feel a little abrupt, but such is the limitation of the format. “Trapped on Teen Planet” still manages to hit all the right notes and plot points, even if it has to fit it all into 32 pages.

And even then, it does give us a few amusing bonus pages at the end, including plenty of Riverdale – err, Sun Valley – themed drinks, complete with humorous descriptions alongside them. Is that a fair trade? I’d say so.

Final Verdict: 8.9 – An entertaining comic through and through, complete with an all-star creative team that brings multiple worlds to life on every page.