After a long wait, the world of the Wytches returns, just in time for Halloween and to set up the second arc of the series.  Was this one-shot worth the wait?

Please note that this review may contain spoilers for both this issue and the “Wytches” series. 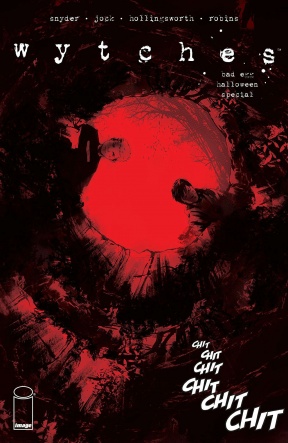 Serving as both a stand-alone story in the WYTCHES world and a prequel to the highly anticipated WYTCHES, VOL. 2, “BAD EGG” tells the story of Seb and Jackson—two innocent teenagers reared on opposite sides of the eternal struggle between good and evil. Sebastian’s mother is a member of “The Irons,” the most ruthless Wytch hunters in history, while Jackson’s family are “High Horn” Wytches. Can these two boys find friendship amidst this age-old blood feud, or are their fates already sealed? Collecting the entire IMAGE+ magazine run and, for the first time, the 13-page, pulse-pounding conclusion plus extra materials, WYTCHES: BAD EGG reunites the Eisner-award winning duo of SCOTT SNYDER and JOCK in a horror-filled romp just in time for Halloween!

Two households, both alike in dignity.  In fair Beasley, Indiana where we lay our scene. From very ancient grudge break new mutiny.  Where civil blood makes civil hands unclean. (Special thanks to my 9th grade English teacher Mrs. Keating for making us all memorize the prologue to Romeo and Juliet that I can still recite – – for the most part – – 25 years later.)

While not star-crossed lovers, the tale of Sebastian and Jackson’s friendship in “Wytches: Bad Egg Halloween Special” has the obvious parallels to Romeo and Juliet: warring families and two innocent bystanders caught in the crossfire. If you were a regular reader of the now-defunct “Image+” magazine, you’ll recognize these stories, as they appeared at the end of every issue. Now collected here in one volume with the conclusion to bring things together and set up the second coming of the series (promised for 2019), this is not a continuation of Sailor’s story, but more of a prequel to it. Was that a smart decision? Short-term thinking may disagree: after a four year wait, is the story of two random boys all that fans should get? We want to know what happened to Sailor after the deaths of her parents and schoolmates – – who cares about these two tweens and their stock car racing? Knowing Snyder and his complex world-building from his various “Justice League” series, here’s clearly a long game and slow burn going on here. Patience will be rewarded, but that doesn’t mean this isn’t a story that can’t be enjoyed on its own merits.

If this one-shot does anything well, it’s world building. Readers were introduced to the world of the Wytches in the first miniseries; with “Bad Egg” we find out more:  who’s hunting the Wytches, different types of Wytches (High Horn, Rooted Wytches).  Again, there’s that long game at play. Snyder gives us just enough information about the major players in this world, but not bogging down in existential details. He concentrates on moments instead of those details. No doubt we will find out more about the High Horn and the hunters, but that’s neither here nor there right now.  Even the central theme of this story, formulaic as it may be, is here for world-building. It’s certainly not short on action or plot twists, and you may be able to smell the ending a mile away, but keep Snyder’s long-term plans in mind.

Jock remains the master of the close-up, just as he was with the original series.  He can establish emotion with a few simple line strokes in a face- – terror, anger, peace, surprise; he does it all. The simple aesthetic carries over to full body work and scenery.  All this keeps within the narrative aesthetic of moments over details.  There is something to be said for the John Layman approach to artwork, filling a page with detail – – it provides Easter eggs for fans to enjoy. At what point does that kind of artwork take away from the narrative? And does it work for every kind of story.  For the world of “Wytches,” a work in progress, that kind of artwork approach does not make sense, and Jock wisely understands this. Shading provides the necessary depth to keep the dark, sinister tone of the series and provide perspective and three-dimensions. Matt Hollingsworth’s colors are quite possibly the most unique touch to this series. Just like the original series, each panel has an overlay of a Jackson Pollock-like scrim, subtle enough that it does not distract, but still visible. There’s no science to the splatter, and the colors complement each scene while adding something ethereal to each pastiche.

My major quibble with this issue is its price tag: $7.99.  Those who didn’t keep up with the installments in “Image+” may not bat an eyelash at that, but the regular readers who kept up could take issue with paying nearly $8 for a conclusion and some special art at the end.

There’s a military term for that which is normal and ordinary that Sebastian introduces us in the opening pages: “standard issue.”  The world of the Wytches has been anything but standard issue, and while this one-shot may frustrate fans who have patiently waited for the next chapter in Sailor’s story, it’s a good reset for both old and new fans to reintroduce the universe in anticipation of part two. I have a feeling it will be worth the wait.

Final Verdict: 7.6 – – Plot may be predictable, but keep Snyder’s long term plans in mind as you read it and this one-shot is anything but standard issue.