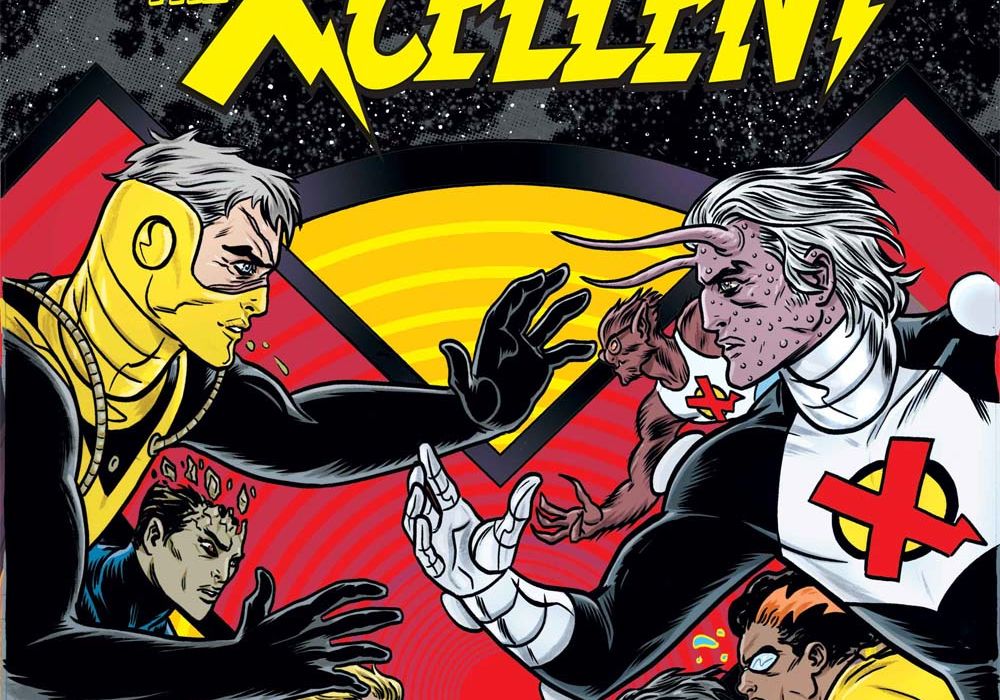 04X-Statix is here, but they have a rival team to contend with. With both X-Cellent and X-Statix at each others’ throats, what kind of comic will we get? Peter Milligan and the Allreds are back, so let’s see what they have planned for the team of fame-seeking, death-defying (and often failing-to-defy) mutants. 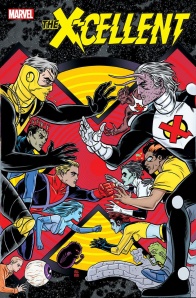 IT’S FINALLY HERE! They were loved by their adoring fans. They were reviled by the harsh press. They lived, they loved, they fought and they died…a lot – all for the sake of fame. They were the X-Statix, a team of mutant celebrities fighting for a brighter world and an even brighter spotlight! But they’re old news now, because there’s a new mutant team that will live harder, love harder, fight harder and die a whole lot harder than those has-beens! Peter Milligan, Michael Allred and Laura Allred return to introduce the best new super hero team you didn’t know you needed! Meet…THE X-CELLENT!

Okay, to start things off: “X-Cellent” is not a comic someone can just start reading without context. To really get it, you’ll have to be familiar with “X-Statix” and all the continuity therein, so this is not a comic for new readers. Considering the last we saw of the team was in 2019’s “Giant Size X-Statix,” readers will have to go through a lot of back issues to figure out or remember what’s going on.

And if you’re expecting to see how the X-Statix members are doing now that mutantkind is living on Krakoa, well, that doesn’t factor into anything either. With a team like the X-Statix, known for how frequently its teammates were killed off (a point that is mentioned and put to nice dramatic effect in this issue), you’d think the Krakoan age would open new opportunities to bring old characters back and kill them in new and exciting ways, but such is not the case with “X-Cellent.”

Instead, we’re given a quick introduction of the X-Cellent and X-Statix teams, before getting thrown right into the middle of things. The X-Statix team is filming a TV show, whereas the X-Cellent using social media to fight against them, and the rest is just a series of the two teams being at each others’ throats.

It comes complete with all the same character drama, fame-seeking bickering, and death-fueled fights as one would expect from a comic featuring X-Statix. So if you’re a fan of the team, they’re back in full form.

If you’re new to them, however, this can be jarring and make it a little hard to get invested in the characters.

Peter Milligan still knows how to write these characters, classic X-Statix members and new ones alike. Even when they’re bickering over who gets the spotlight, or trying to figure out their hero names, each one has a distinct personality. On top of that, the use of “unreliable narrators” plays well to the characters doing the narrating, infusing the scenes with personality while showing us as readers the truth.

There’s also a decent amount of comedy, like Mirror Girl messing with comic convention attendees, and how utterly over-the-top Zeitgeist’s doctored video is.

But as far as story goes, that’s about it; we’re introduced to the characters, the conflicts, and the action, then we get to see it start to unfold. Of course, this is the first issue of the new run, so those are all the elements we need to start with.

Meanwhile, Michael Allred and Laura Allred work together to create a very distinct art style. The character designs and overall style are bold, clean, and feature a look I can only describe as “uniquely two-dimensional.” The thick lines and distinct designs with strong colors make them stand out against the moderately flatter backgrounds in a way I’ve only seen Allred’s art do.

This style also lends itself to some absolutely bonkers scenes, and I mean that in the best of ways. We get big fights between groups of characters where everyone is clear and distinct, as well as crowd shots, explosions, and no small amount of blood and guts at dramatically appropriate moments. (And if you’ve seen what Michael Allred can do in comics like “Silver Surfer,” you know just how amazing this unique style can get.)

The colors are bright, practically popping off each page. The color work in “X-Cellent” relies on matching shades of each color to add a level of uniformity to the each image, which continues to add to the distinct art style the Allreds bring to the comic.

So, in the end, “X-Cellent” is a modern continuation of the “X-Statix” story, which is great if you’re a fan of the original run, but not so much if you’re new to the team or want to see how the X-Statix fit into the Krakoan era of the “X-Men” mythos. If you’re a fan of the original team, you’ll love “X-Cellent” and see how the creative team hasn’t missed a beat, but if you’re not, you’re more likely to spend the comic going “Who are these people and why should I care about them?”

Final Verdict: 6.0 – A fantastic continuation of the “X-Statix” comics for fans of the original, less exciting if you’re new to the team and hoping to jump in on a new first issue.