How does a war based on fear and the conception on constant threat can be won? How can a group, fear and hated by a world they are sworn to protect, can win a battle without showing massive amounts of destruction capacity? It is this question that lies at the core of “X-Men Red” #10 and one that Taylor, Antônio and team answer amazingly well. 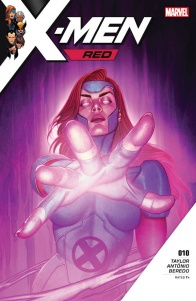 In the aftermath of a showdown between Jean Grey and Cassandra Nova, the rules have changed – and the battle is nowhere near over! It’s all hands on deck as the building wave of hatred against mutants crashes down on the X-Men!

“X-Men Red” has been an interesting series from the start: apparently conceived to showcase Jean Grey’s return to the spotlight after her resurrection, it quickly established itself as a moral debate into the rights and wrongs of mutant powerS and, allegorically, to the dangers of hate, misinformation and the unwillingness to be compassionate in a real-world scenario. Issue #10 starts to bring these themes to a close, as Jean Grey and her team ultimately bring the confrontation to the doorstep of their enemy (in the truest sense of the word), Cassandra Nova.

Art by Rogê Antônio is very effective in delivering a clear narrative and distinct characters, despite not having a flashy style or showcasing any specific area in a dramatic fashion. While this could be seen as a criticism, it is just too often that readers find artists more concerned on presenting a massive splash page and getting lost on the more central aspects of a comic book, than of visually narrating a clear story. In this particular area, Antônio delivers in spades, as the relevant progressions the scripts required of him are absolutely on point. On sequence in particular, right at the opening pages of “X-Men Red” #10 is a study on how misleading an able artist can be in showing the reactions of one character, but influenced by another. The details on body language, facial expression and the overall attitude that is transparent from these pages is merit alone for congratulations.

Beredo on colors has ample space in the spotlight to chow his chops, and there are moments in this issue where that really shows. First, in a sequence where the looming face of one key mutant hovers high above the island of Genhosa. The effects on transparency that Beredo utilizes, with a subdued pallete for increased effect, presents a truly haunting imagery, and one that would draw fear from the citizens of the Marvel universe, and trepidation on the series’s readers. Additionally, throughout the issue Beredo composes the pages by Antônio by enhancing lightning effects, to larger or smaller degrees. It is always well utilized, adding layers to the pages, rather than pulling unwanted attention; it strikes just the right balance.

If there is one criticism about Taylor’s script is that, at this juncture, it can feel like the same topics have been discussed enough in previous entries. Not that they are not complex, layered discussion points, but it is starting to feel a bit rehashed from past issues. Having said that, and taking “X-Men Red” #10 for its own stand-alone merits, the logical progression of a war to end the conception of the dangers of war is a very interesting one, and the key aspect this issue and series should be remembered for.

Taylor absolutely nailed Jean Grey and Cassandra Nova in past issues of “X-Men Red,” and this one is no exception. Their opposing world views and the way they interacts with characters on their influence zone – one, a leader by compassion, the other, a tyrant by intimidation – is a joy to observe. Within that vicinity, characters that Taylor is known for handling well (like Laura and Gabby) steal the spotlight on every moment they are included, while others (like Gambit) are delegated to a secondary role. Again, this series feels like a prolonged arc for Jean Grey, her enemy and friends, even though some components of a true ensemble book shine on particular moments.

There are reveals towards the end of this issue that will remain unspoiled on this review that really ramp up the expectations of what will be the final chapters of this story. With stakes at an all-time high, the very concept of “waging peace” is most certainly something to watch. Hopefully, Taylor will emerge victorious in presenting a compelling closing argument on a complex debate and manage the landing of a series that has been very strong and promising since its beginning.

Final Verdict : 7.5 – Despite meandering on topics that might be over-discussed at this point, Taylor, Antônio, Beredo and team continue to display one of the more complex series for Marvel’s X-Men in recent years, with an art package that wastes little frills in favor of concise narrative flow.