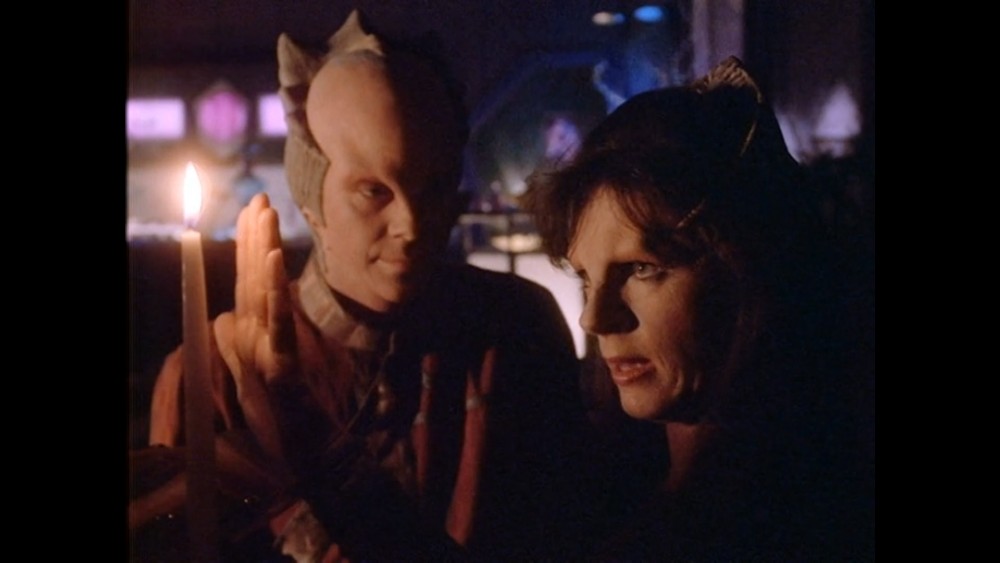 Time travel shenanigans are the least of the crew’s worries, Billy Pilgrim makes an appearance (not really), and an old friend returns. Welcome my friends. This is the story of the last of the Babylon stations. The year is 2260. The name of the place is Babylon 5.

1. This is How You Win the Time War

I am consistently split on time travel stories. Sometimes I’m all for them — Agents of S.H.I.E.L.D., Doctor Who, “The Time Machine” — other times I bash my head against a wall and want it to be over — 12 Monkeys, Looper, Looper, Looper. I trust J. Michael Straczynski to tell a compelling story without getting too stuck in the nonsense that is a time travel narrative. It had also been seeded that some sort of time shenanigans would happen eventually back in the season one episode “Babylon Squared” but I’d honestly forgotten about that aspect until now. A lot happens in this show, y’all, I can’t remember everything!

And that’s what’s so masterful about this episode. I didn’t have to remember the details of an episode from two years in the past as “War Without End, Part 1” made sure to re-share the important flashbacks, moments and ideas without being too ham-fisted about it — looking at you, clip-show episodes. That doesn’t mean it’s perfect in execution, the ending just kinda happens like part 2 is supposed to kick off right away, but it works well enough. Plus, JMS recontextualizes the events of the past, why B4 disappeared, and gives the seeds of how the hell those letters, written in English, were passed onto the Minbari 900 years ago. That’s one way to make this two-parter feel more monumental than the others.

So. . .yeah. Remember those visions from “Babylon Squared” and the teasing of the destruction of Babylon 5 via kaboom? Turns out they’re (potentially) one and the same and are caused as a result of the crew of B5 not being able to steal B4 and throwing it into the past to help defeat the Shadows during the FIRST shadow war. This is where time travel bullshit loses me but suffice it to say space is warped and time is bendable and this future can be avoided, presumably because it’s a possible future seeping through a time rift wherein B4 DOESN’T go back or is stopped or something. 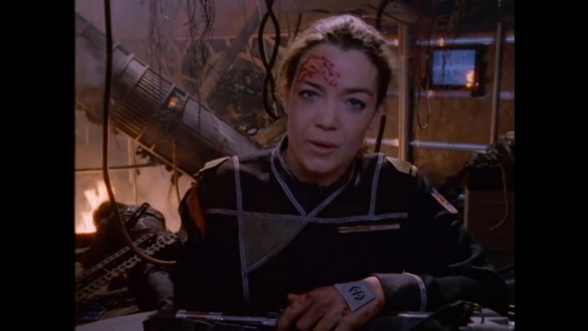 This is your station on Time Travel

I adore the implications of the destruction, as well as the execution, even if Claudia Christian’s acting in that scene is a bit. . .Troll 2. However, her and Doyle’s reactions to the initial signal and the scene once recovered sells the fear it instills. Things are serious and dire and if actions are not taken, they’ll all be dead via a fusion reactor bomb.

3. Break Out the Red String

OK. OK. Hear me out. Babylon’s 1-3 were all destroyed by the Shadows’ agents before they could finish completion but somehow they missed B4 until it was nearly too late. Maybe because it was close to the Great Machine on Epsilon 3, where Draal is at the moment. Maybe it was done faster than the others. Maybe the Shadows lost too many agents or were weakened or something. Whatever the reason, they’re why the Babylon project continued to have troubles. With the information that B4 was super important and the Shadows recognized it, this makes a bunch of sense, right?

Then, once B4 was sent back, they had no need to destroy B5 because the damage was done and a new game was afoot. I hope my theory is right, as it goes to explain why so many weird things happened to the previous stations, though I don’t know how important that detail is to the overall plot. Doesn’t matter. Imma stick to this theory and find out if it’s right next week!

4. We Sure Kilgore Trout Didn’t Write This Episode?

Most of this episode’s time travel nonsense was kept fairly contained. It’s a closed loop, with actions required in the present to ensure something in the past happens. Like putting up the interior half of a wall so someone on the outside can put the electrical wiring on the outside half that will then become the inside of the two halves of a wall before resealing the outside. I think. Look, conceptualizing actions in time in a direction other than forward is really difficult. Anyway, it’s simple but then Sheridan’s time anchor gets borked and he becomes unstuck in time.

Again, not really difficult to conceptualize but it really throws a monkey wrench into the neat loop and I assume next week’s episode is going to complicate things even more. Well, that and him being sentenced to execution by emperor Londo in the future for allowing Centauri Prime to burn after defeating the Shadows. Whoopsies. Couldn’t have happened to a nicer seat of imperial power.

(I am flippant but the wholesale destruction of any city wherein significant numbers of lives are lost is a genuine tragedy and one of the many consequences of war. War is bad, y’all and the US has not been out of a war for the last 19 fucking years, maybe even more.)

I’ve been beating around the bush for this entire review but it’s true. He’s back. It’s been two seasons since we last saw him act. He’s been mentioned since but not for a good while. An important piece of the puzzle that is the long, 5 year arc. I missed him and I am so glad to have him back. Hello Old Friend. 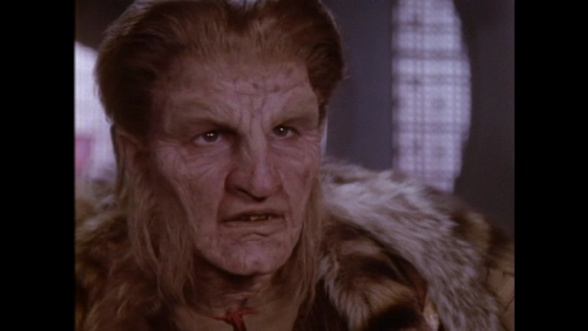 That’s right baybee Zathras is back and younger than ever. Turns out his last appearance, wherein he appeared to die/sacrifice himself, was future Zathras and now we’ve got young Zathras, who remains wise but is perhaps a little more green, a little more eager, and a lot more energetic. He and Ivanova get some of the best lines in the episode and I expect that to continue in part 2.

Who did you think I was referring to? 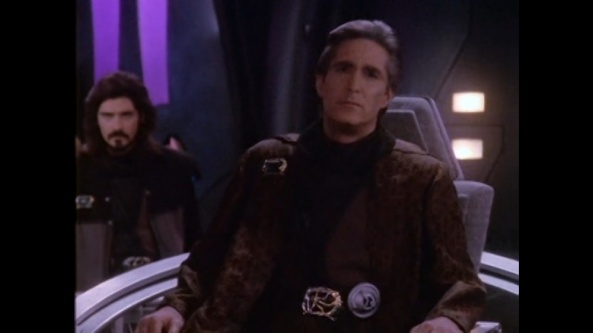 Chair fits like a glove. Also, look at that scowl on Marcus' face

Michael O’Hare is back for a special guest appearance as Ambassador Jeffery Sinclair and it’s a bittersweet return. His performance is more restrained and stoic, which may have been an acting choice but I presume it was also a result of how he managed his mental illness on set in order to complete his arc. It struck me as odd, when compared to the rest of the cast, who seemed so comfortable with each other. . .and then the final few minutes happened, with Sheridan sent off into the future, and I remember the Jeffery Sinclair of old. Michael O’Hare did not miss a step in those moments and while I did not love stoic Sinclair, the contrast was important and heartwarming.

I will talk more about O’Hare’s return in part 2 and speculate on what had to change for this episode with regards to the visions. I’m keeping this short because I suspect I’ll have more to say then, and you can bet I’ll be citing the additional details from Becoming Superman. It will also be a more appropriate time for a send off.

That about does it for now. Join me again in a week for the conclusion to this two parter, wherein the war probably doesn’t end but something does, a station (might) go boom, and we say goodbye to an old friend on the station that, in the year of the Shadow War, became something greater.

Garibaldi: “Ivanova, want me to bring anything back from the future? A bagel? Some milk? 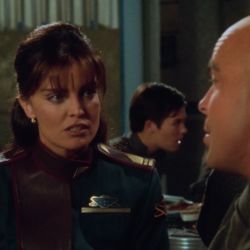 Two-bit mobster wannabees never change, classes are the same no matter the century, and we, kinda, learn a little more about Lockley’s past. 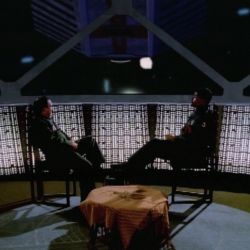 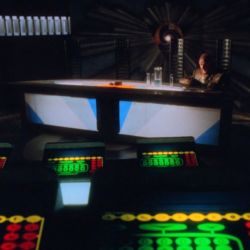 Five Thoughts on Babylon 5‘s “The Paragon of Animals”

What even is morality? How important are the right words? When does the pursuit of knowledge become an unethical violation of privacy? Welcome my friends. This is the story of the last of the Babylon stations. The year is 2262. The place: Babylon 5.Spoilers ahead.1. Politics. Politics Never Changes.You didn’t think things would be all […]