On the fourth episode of Big Hero 6 season 2, Liv Amara broke the criminal duo High Voltage out of jail, and blackmailed them into doing one more robbery for her. Meanwhile, Aunt Cass set up Hiro on a date with Megan (Isabella Gomez), the daughter of a friend who’s just moved to San Fransokyo.

Aunt Cass’s absence in the three prior episodes left me worried that Maya Rudolph had been too busy to reprise her role this season, but thankfully no, she’s back in the first scene, telling Hiro he needs to spend less time studying and more with kids his own age. Cass and Hiro have always been reminiscent of Aunt May and Peter Parker (Tadashi is basically their Uncle Ben), and this continued that: when Mary-Jane Watson met Peter the comics, it was because May and her own aunt Anna had been trying to introduce them to each other.

Fred tests out a new suit in this episode based on a chameleon, complete with camouflage abilities, which are still a work-in-progress – partly because he can’t see himself, causing him to bumble around. It’s a smart out-of-the-box writing: you probably wouldn’t have much as much control as you think you would if you were invisible, nevermind if you were wearing a bulky suit. Fred’s antics lead to him puncturing Baymax, which I was pleased to see after the last episode, where the big balloon was suddenly inexplicably immune to being deflated – kudos to Toon City Animation.

3. Well That Got Nightmarish Fast

Liv Amara gives High Voltage implants to generate their own biolectricity. After performing their task for her, they crash a high school dance that Megan has invited Hiro to, as Barb wants Juniper to enjoy a normal life. When the rest of Big Hero 6 turn up, Barb performs a Chicago-style solo number explaining their new leaf, which quickly goes from delightful to horrifying as it’s revealed the eel DNA in their implant has turned them into fish monsters. It’s pretty freaky, and I can’t imagine what it was like for the kids – and just what were the two secreting as they slipped away? As the gang quips, “ewl” indeed. 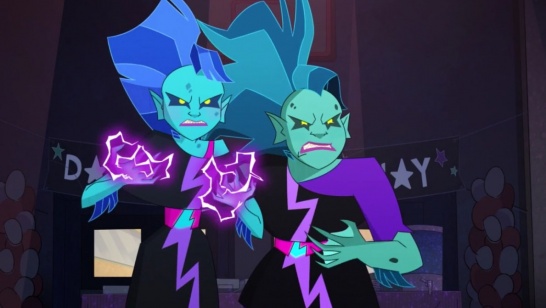 The episode ends back in Liv’s office, where we see High Voltage in their final forms, human-sized, human-faced eels in the tank behind her desk. That is messed up, given they were planning to reform. (Seriously, Amara is repulsive.)

Megan’s dad turns out to be Chief Cruz, the new head of police, who shows up at the dance to investigate the commotion. He’s voiced by the great Nestor Carbonell, who played Batmanuel in the original Tick, and Mayor Garcia in The Dark Knight, so it’s a delight to hear him on the show. As you might expect, Cruz is pretty warm towards Hiro, but is pretty skeptical about vigilantes like Big Hero 6, complicating his fledgling relationship with Megan. With these relationships, it’s always interesting to see just how antagonistic the cynical officer will become, and how much of it will be played for laughs, given the show’s fun tone.

I have a theory about all the biological transformations going on this season, and it has to do with how in the original comics that inspired the film, Fred didn’t just wear a kaiju suit, he could actually turn into one. So in this season, might we see a big homage to the source material, by way of Fred getting an implant with reptilian DNA, and becoming his very own Fredzilla? It would be dramatic to see the team contend with one of their own (as well as Baymax having to put his medical knowledge to good use), but I guess we’ll have to wait to find out.

By the way, the team don’t bring up Momakase’s transformation while realizing what the theme of the season is, indicating it was aired out-of-order.

Bonus thoughts:
– I like how Fred’s could surmise what was going on with High Voltage thanks to his comics knowledge, but no one believes him because he’s such a bimbo – just goes to show even a broken clock is right twice a day.
Continued below

– We see Go Go darkening her visor, which is a first.
– Honey Lemon building a Gummy Bunny armor was pretty sweet (no pun intended), I’m curious to see what other constructs she’ll build in future.

See you next week for “Nega-Globby” (ooh, I wonder who the villain could be).