It was bound to happen sometime: Hilda’s best intentions end up throwing everybody for a loop. In “The Tide Mice,” the Hilda producers introduce magic into this world, which is bound to have boundless repercussions to the narrative. Warning, spoilers.

1. Just a Little Bit of Luck

As “The Tide Mice” opens, Hilda finds people she cares about caught in tough circumstances. There’s David, who turns out is a talented singer, but his overall clumsiness and penchant for destruction has horribly hindered his chance to shine. There’s also Hilda’s Mum, previously seen at a drafting table, but with not a lot of design work available, is forced to take a job at a local hardware store. This, of course, leaves her too exhausted to work on any of her projects.

Clearly, the two of them are immensely talented but they can’t catch a break. Luckily, Hilda happens to stumble on a secret room in the library, where she discovers a book of spells for a novice sorcerer. A little bit of enchantment later, and things suddenly starting turning up David and Hilda’s Mum.

2. Creature of the Week

This week on Hilda, we’re introduced to the tide mice, these manifestations of Hilda’s enchantments. They’re made out of a personal effect of the enchantee and a lock of their hair. Once released, they scurry around a live perched on the enchanted person’s head. The animators often remind us of their presence from their glowing eyes. The second they settle in, David and Hilda’s Mum’s luck begins to change. David is offered another chance to audition for the Sparrow Scouts’ choir and he navigates the obstacles onstage like a pro. Hilda’s Mum finds a major ad campaign for bells dropped in front of her and her ads appear all throughout Trolberg.

“The Tide Mice” is actually kind of short on weird creatures. The real wonder comes from the secret room in the library. “Libraries are thrilling temples of the unexpected!” Alfur says. Hidden behind a shelf, the place is filled with several stories worth of books and a cool staircase. A young librarian tells Hilda she’s not allowed to check out any of the books but is welcome to read as long as the place is open. I guess you could also argue that the books make up a creature of their own, especially with their footnotes upon footnotes. So many footnotes David Foster Wallace would have gotten lost in them. These, of course, make Alfur swoon.

Be real: Twig is great. Let’s take a moment and appreciate this dude and the various expressions and postures the animators have given him: 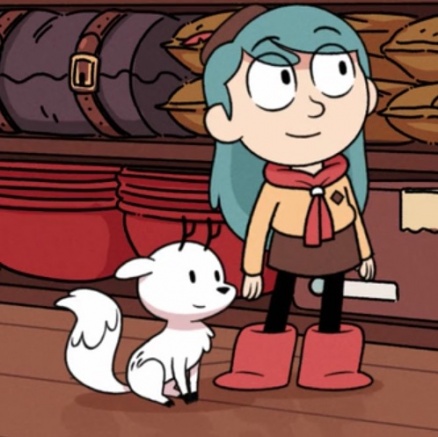 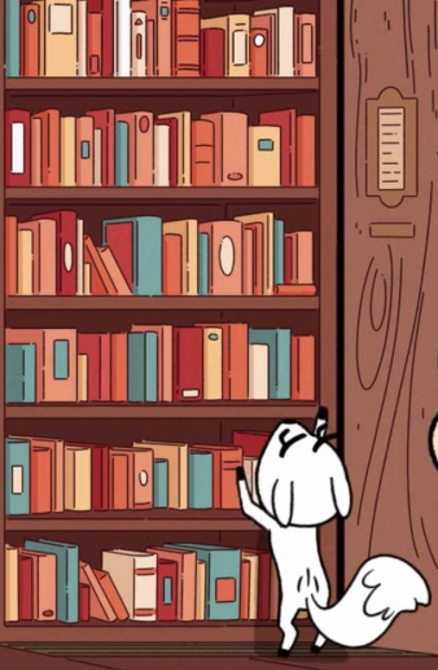 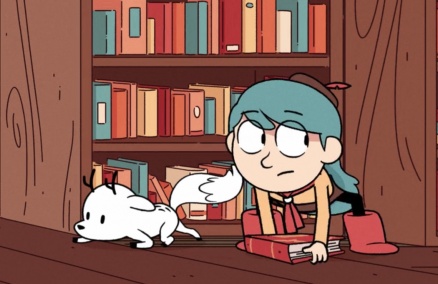 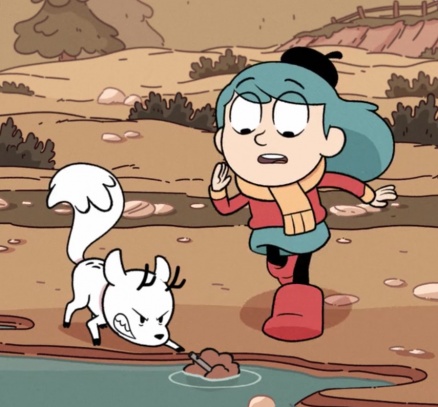 Maybe it was just me, but Twig was in this episode a lot more than some past ones. It was all the better for it.

4. The Cost of Magic

Okay, in all honesty, Hilda probably ought to have suspected something was weird when she tried to photocopy a page from the novice spellbook. The machine glass glows green, the lighting turns dim, and there’s an evil voice laughing in the background. As “The Tide Mice” develops, we learn that the mice themselves are sucking out David and Hilda’s Mum’s souls, transferring them over to Hilda. For all the luck they’ve been having, there are moments when David and Hilda’s mother suddenly spazz out. Their eyes turn into shock white ovals and their heads fall back while they growl, green ooze seeping from the corner of their mouth while a purple mist swims above their heads. Hilda gets some good laughs out of this gag, especially in the expert timing from the animators.

Hilda, Frieda, and Alfur manage to figure out a way to break the enchantment before Hilda absorbs the souls of her friend and mother. This is an even more complicated process, ending with a light show and one of those superhero beams of energy tearing apart the sky. (Which is fine, but the really impressive part of the scene is the lighting from the car headlights. There’s some Coen Bros. mise en scene going on right there.)

The joke in the episode was that the spell was for novices. So I wonder what’s going to happen if and when they start dabbling in more complicated enchantments.

5. Everything in Its Right Place

More than anything, Hilda feels like it’s setting up stuff to pay off later. You have Hilda now being able to use magic. There’s the library and its increasing importance. At the end of the episode, the two tide mice manage to sneak into Hilda’s pockets. Add this with some of the other stuff the show’s been dropping and I think we’re in for some big payoffs. Or it’ll be like that Adventure Time thing with all the mutated bananas that turned into a slapstick routine. I dunno. 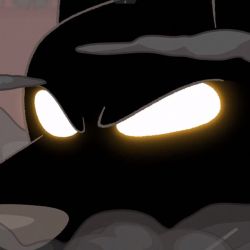 It’s been a wonderful and bright time together as we’ve worked toward this point, the final episode of Hilda‘s first season. It’s been so wonderful, the show has even made our best of the year list. The fun won’t end though as Netflix has greenlit Hilda for another season. So let’s see where we end up and […] 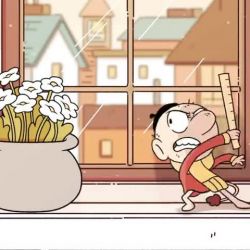 Five Thoughts on Hilda’s “The Nisse”

We’re nearing the end of Hilda‘s first season and, true to modern form, there’s a lot “The Nisse” sets up with very little resolution. Like the first two episodes, this takes the “Hilda and the Black Hound” comic and splits it into two parts. Albeit with much more characters and subplots running through. Still, the emotions […] 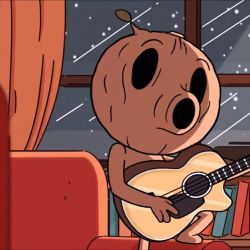 Five Thoughts on Hilda’s “The House in the Woods”

Hilda has survived the massive storm that rocked Trolberg. However, she had been launched into the stratosphere and now finds herself back in the woods. Part of her is comfortable at being in familiar surroundings. The other part of her just wants to get back home to her mom. Warning: spoilers.1. Hello, Old FriendsOne of the […]