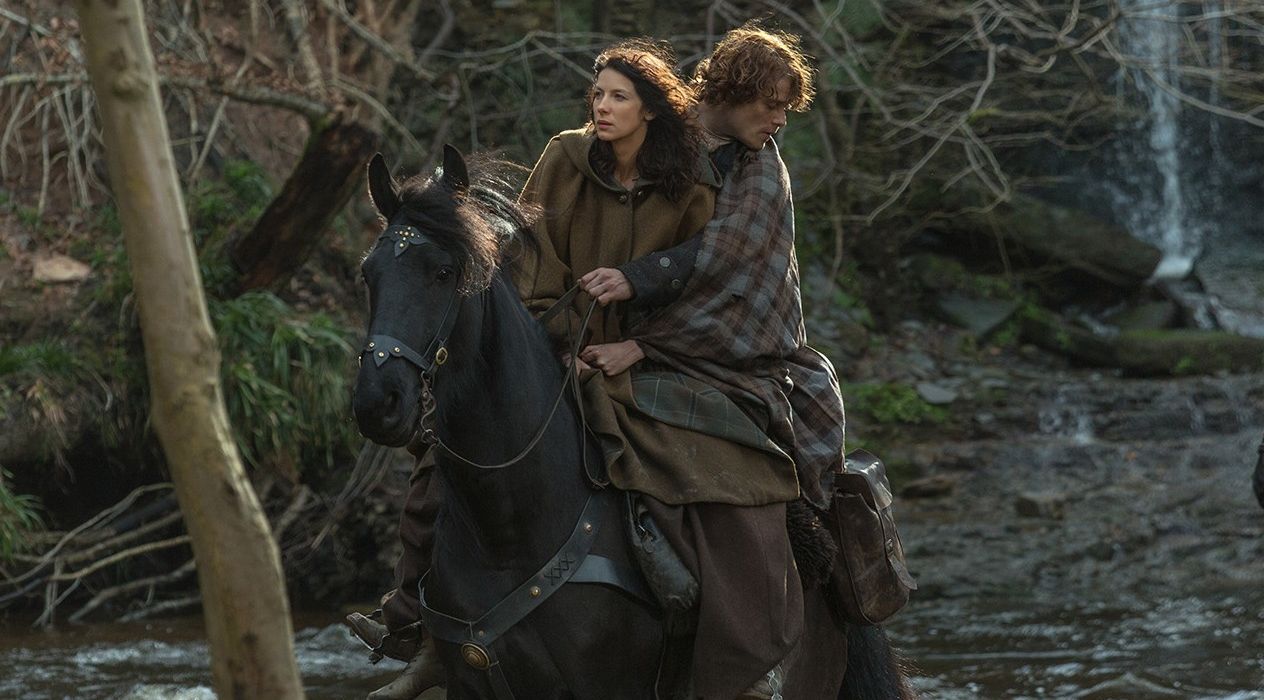 Come sail over the sea to Skye with us this summer, as we take a trip through the stones to the first season of the television adaptation of Diana Gabaldon’s Outlander book series.  First published in 1991 with Outlander, Gabaldon’s multi-genre novels features the time traveling love story of Claire (Caitriona Balfe), a 1940s woman who finds herself out of time and place in Scotland in the era of the Jacobite rebellion. The U.S. pay TV network Starz debuted the Outlander TV series in 2014, with the show concluding its fifth season last year. In celebration of the ninth novel out this autumn and the sixth season of the TV series debuting in early 2022, we’re spending our 2021 summer vacation at Castle Leoch.

The midseason finale found Claire in the clutches of Black Jack Randall again, but Jamie’s here to save the day.  But what other wounds get laid bare in the aftermath?

It should also be noted that Outlander is very much an 18+ series, with graphic violence and sexuality throughout. Spoilers within for both the tv show and the novel series.

This episode contains a content warning for violence against a woman, including violence perpetrated by her spouse.

This mid-season opener not only starts with a cold open. but with a narration by Jamie, waxing poetic about what in his life got him to this point and made him a man, before he starts negotiations to attempt to clear his name. (You’ll recall that in the previous episode, Jamie discovered a potential way out of the price on his head.) It’s as these negotiations break down that he receives word that Claire’s gone missing, captured and off to Fort William, bringing us now to the present state of affairs.

Up until this point, Claire had been providing the narration for this story.  This switch to Jamie as narrator (which continues throughout the episode) not only provides a nice counterpoint to Claire’s speech that opened the series, but also shows how much of an equal player Jamie is becoming in her story.

It takes a village (or a clan) to rescue Claire, and the operation is quite the undertaking, almost James Bond-esque in its execution.  Jamie bluffs his way into Randall’s chambers with empty guns to prevent Claire’s rape by Randall, the English fire back (literally) and the escape culminates with Claire and Jamie jumping off of the top of Fort William to horses and freedom. (That last part certainly reminded me of one of The Princess Bride’s final and iconic scenes.)

While everyone here deserves a round of applause for their grace, guts, and grit, a special award goes to Jamie.  On Ned’s advice not to kill anyone, he enters Fort William with empty guns. And when Black Jack Randall takes one of those guns with the intent on ending Jamie’s life, it provides enough of a distraction for him to knock out the Englishman and spirit Claire away.  It’s a bold and gutsy move, and it pays off.

You’d think Jamie would be happy to have his wife back safe and sound . . . except that he’s not.  He’s rather cross at Claire for not just staying put and doing as she’s told. Claire’s 20th century ideas of the role of woman and wife provide counterargument and it’s a hot and heavy conflict between the two newlyweds.  It’s also short lasted, as Jamie’s anguish over seeing Claire in that state, and the risks he took to save her move Claire to beg forgiveness, and Jamie to offer it in return.

It’s natural to see couples fight, and to fight as bitterly as these two did.  When that passion is there, it’s bound to explode. Compared to Frank and Claire’s marriage where they always seem to be on even keel, this blowup is practically healthy in comparison.

But while Jamie’s forgiven her, the other men have not. And they show their displeasure by ignoring her at the hall.  Claire has to be taught a lesson, as Angus tells Jamie.

What is that lesson? It’s a spanking.

You read that right.  Jamie spanks his wife to punish her for running away, as if she was a child and not a grown woman of her own agency.

This is very much a disturbing and graphic scene to watch, from the actual spanking event to the reaction of the other men the following morning, having heard the entire exchange.  Poor Claire has now been on the receiving end of violence from men two times over in a short period of time, and she takes to calling her husband a sadist, just as she called Randall.  But there’s a difference. Randall took joy in that violence, and Jamie makes it clear he does not.

After what seems like eternity, Jamie and Claire return to Leoch to a homecoming mixed in nature.  Most of the castle is happy to greet the newlyweds, but Colum and his wife Letitia are less so, especially after the events of Fort William, the side hustle of collecting for a Jacobite army, and Jamie’s marriage to a Sassenach.  It’s very much the “I’m not mad I’m disappointed” sort of speech your parents would give you that cuts deeper than if they were just mad.

Here is also where Jamie takes another bold move that pays off.  He manages to convince Colum to pacify his brother and friends and let them play their game of rebellion (quietly) for now.  The move will give Colum time to assess the long term view of the situation and decide his loyalties accordingly.  “Dougal may be war chief, but he knows only you can cry for war.”  Another risky move that pays off for everyone.  Except for Jamie, who still hasn’t figured out how to make things right with Claire.

There’s also someone else who’s not thrilled at these recent nuptials: Laoghaire MacKenzie, whose crush on Jamie has crashed and burned upon discovering he’s wed. Although he’s out of sorts with Claire, he doesn’t take the bait that Laoghaire offers him.  Hell hath no fury like a woman scorned, as the saying goes. Let’s see just how well Laoghaire deals with this news. If you read that and wondered to yourself “gee, that’s a pretty loaded statement,” you would be very much correct.  As I’ve said before: stay tuned.

In the final act, custom and tradition collide in two different ways.  Jamie determines that the way to make up with Claire is to throw out the traditions and customs of his past, swearing that he will never lay a hand on Claire again in the way he did earlier.  He also reveals that his wedding ring to Claire is forged from the key of Lallybroch, his childhood estate.  The old world and new collide for this couple, as they will time and again.  The unconvention is what makes them so incredibly sexy, and makes you love them more and more.

You’d hope at this point there’s a happily ever after for these two, but we still do have about seven episodes left in the season, so not just yet. But more immediate problems arise: Claire finds an “ill wish” under their marital bed.  And Jamie knows just who left it there.

We’ll see you next week for “By the Pricking of My Thumbs” and do let us know what you thought of the episode in the comments. 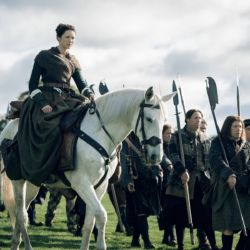 Welcome back to Lallybroch, Sassenachs – – and you can hear the drums of war with each passing day throughout the Highlands.  Jamie and his men prepare for the fate they will face, and it’s not without trauma for Claire, as her 20th century life invades her 18th century one.  Will fortune favor the Scotsmen […] 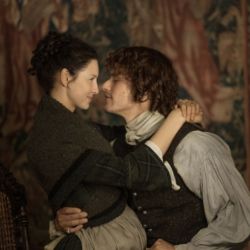 Welcome back to Lallybroch, Sassenachs!  And we mean that for real this time. After several months in Paris attempting to stop Charles Stuart from regaining the throne and change history, the Frasers return home in the hopes that they can be more effective there.  What they find is a changed Scotland, and both new and […] 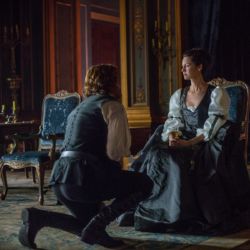 Welcome back to Lallybroch, Sassenachs!  It’s time for another Scottish summer with a look at Outlander‘s second season.  But this year, we won’t be in the Highlands: we’re crossing the Channel to the Continent, where Claire and Jamie will find a new temporary home in the City of Light.We had an unexpected week off due to […]