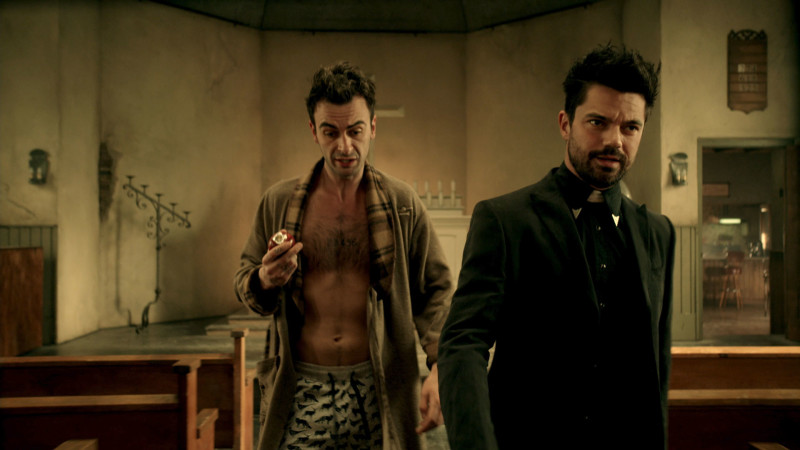 This week on Preacher, Jesse’s plans for salvation for Annville run over Odin Quincannon’s ambitions for the town, we get a little insight into the mayor’s life, and Cassidy meets Tulip. Naturally, we’ll have hella spoilers up in this after the jump.

Quick note: Apologies for the delay over this, all future reviews will be on Monday as before.

1. That Sinkhole of an Open

So this week’s episode of Preacher< opened with the other prostitutes from the brothel Tulip works at getting chased by some of Quincannon's men, leading to one woman's accidental death when she falls into a sinkhole. Because I've been so conditioned to expecting the cold opens of these episodes to introduce aspects from the comic we're not ready yet (Herr Starr, Saint of Killers, etc.) I expected Jodie and Jesse's extended family to be the ones hunting down these girls. Instead, it was Quincannon's men, but I think it says something about the show that I keep expecting new aspects of the comic to just appear. I wouldn't be surprised if next week opened with Jesus De Sade banging an armadillo before never being mentioned again for another two seasons. But really, I'm kind of having a problem with how soft the show's focus seems to be. I haven't had a hard time recommending Preacher to friends, but I’ve had a hard time describing what it’s about. With the comic I know I can just say “Small town priest is possessed by a heavenly being and goes in search of an absent God.” With the show I’m kind of stewing around saying stuff like “Jesse wants to save his town? His ex is an assassin? There’s an Irish vampire and a meat packing tycoon but don’t worry about it, it’ll probably be less relevant when the ghost cowboy shows up?” The show’s a total scattershot which is fine right now because we’re like four episodes in, I’m just hoping there’s an actual endgame in sight.

This episode gives a lot of screentime to Jackie Earle Harley’s Odin who’s spent most of this season on the sidelines looking weird menacing. He gives a short and cruelly practical speech about the girl’s death in the sinkhole, much to the sheriff’s approval, and moves on leaving Tulip dumbfounded and furious with his henchmen. I’m still not sure where they’re going there, but they at least hint towards Odin’s involvement with Jesse’s past, as a flashback shows Jesse waiting for his father in Odin’s office. Custer Sr. storms out and Jesse briefly looks into the office, and I am giving all the hope I have to the notion that he spotted Odin fucking his meat statue from the comic. Man, I’m really sorry if you haven’t read “Preacher.”

Anyway, Odin’s involvement with Jesse past makes the likelihood of Jesse’s family seem like it’s going to be extraneous. I guess he’s trying to prove his own identity and worth through saving the town, rather than by beating the tar out of his uncle, but I’m a little sad we might not visit Jesse’s family.

After her friend’s death, Tulip tries to take on some vengeance by killing one of Odin’s lead guys, only to end up killing Cassidy who’s in the middle of a drug and hooker stupor after taking money from Fiore and DeBlanc. He falls out of the window and Tulip takes him to the hospital. On the way there, Cassidy asks her for a kiss which she obliges before dissapearing when they make it to the emergency room. TV viewers probably thought this was a funny scene, but it probably freaked out any comic readers out there, considering where that road ends up taking the trio.

The angels in this episode don’t do a whole lot save give Cass his hooker money and reveal that they’re not really in contact with Heaven right now. I’m guessing they were in charge of keeping hold of Genesis (or whatever they’re gong to name the thing in Jesse) and wanted to get it back before management figured out the baby was gone. They found out, and called towards the end of the episode. This was probably the most exciting part of the episode for me, because the sooner we can get out of Annville and focus on what’s going on in Heaven, the happier I’ll be.

5. Andy Daly On Eastbound and Down

If you want to know why I want out of Annville, it’s because I don’t care what’s going on with mayor Miles Person and whatever Jesse’s church lady friend is named, especially when the former should absolutely be played by Andy Daly. Sorry. I’ve got a lot of love to give but not for the crazy preacher, the crazy hitlady, the crazy vampire, the crazy angels, the crazy sheriff and son duo, the crazy ghost cowboy, AND two small town folks trying their best. I am who I am, I guess. 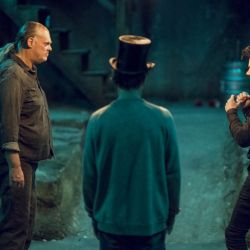 Five Thoughts on Preacher’s “The Light Above”

Open up your umbrella and hope you don’t burn alive – – it’s time for some more Preacher y’all! Here we are once again, barreling through season three. Nice to have you with me. In a world where god is a dalmatian man and the messiah is an inbred idiot, it’s good to have a […] 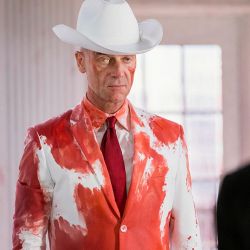 Swallow down your soul, and try on a cheap wig – – it’s time for some more Preacher y’all! Here we are once again, barreling through season three. Nice to have you with me. In a world where god is a dalmatian man and the messiah is an inbred idiot, it’s good to have a […] 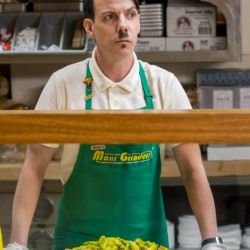 Order some sushi and pop in some plastic fangs- it’s time for some more Preacher y’all! Here we are once again, barreling through season three. Nice to have you with me. In a world where god is a dalmatian man and the messiah is an inbred idiot, it’s good to have a pal to share […]