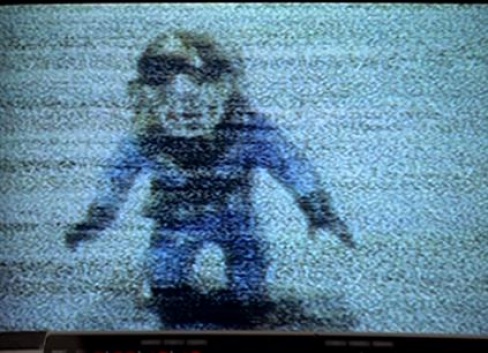 Summer is long gone and that means the Multiversity 2017 Summer TV Binge is winding down. I’ve spent the last couple of months looking at the first season of The X-Files and we’re getting close to the big finale. This week, I’m looking at “Born Again,” an episode so bad that even the cast hated it.

“Born Again” is a strange episode that begins in with a cop, Sharon Lazard finding lost little Michelle Bishop on the streets. When she takes this little girl back to the precinct, another officer, Barbala, comes in to interview her. Barbala doesn’t last long as he is thrown out of the window very quickly. Michelle Bishop claims that a man did this and not her. This is what brings Mulder and Scully into the case because Lazard calls in the F.B.I. as she (presumably) believes they are more equipped to handle this. What follows is kind of a bizarre x-file that tries very hard to be a generic cop show episode.

“Born Again” tries very hard to be a generic cop show episode and because of that, it fails really hard. As we find out after watching the video from the room Barbala was thrown out of, this was done by the long dead Detective Charlie Morris. After putting together what he sees in this video with what he learns from Michelle’s therapy sessions, Mulder comes to the conclusion that Michelle is Morris reincarnated. Morris is on a mission to get revenge against his former partners. Almost 10 years ago, Morris, Tony Fiore (his closest partner) and two other cops Barbala (dead) and Felder (also now dead) got involved with gangs and Morris got killed in what appeared to be a deliberate hit. After his death, Fiore married Morris’ wife and now that he’s reincarnated, he’s taking out each one of this former friends and now Fiore is the last one. If this were another show, this would make for a good story but it’s kind of not something that fits into The X-Files. It also expects us to get involved in this tangled mess in an emotional way but honestly, so much is thrown at us that it becomes hard to feel that way. It’s a one hour episode and it gives us too much character stuff for one offs that ultimately mean nothing.

3. This is “Shadows” All Over Again

Remember the episode where the secretary was being protected by the ghost of her former boss as he also wanted to get revenge? This is like the exact same thing but with a little girl instead of a grown woman. It’s one of the laziest things and when it dawns on you that these are basically the same thing, you don’t even want to finish the episode.

So here’s the thing about this episode, this is barely an x-file. In all honesty, what happens here would have happened whether Scully and Mulder were involved or not. These are the episodes that aren’t as fun because they don’t feel like they’re a part of it but merely observers. Even in the hypnosis and therapy scenes, they aren’t really important to any of this because the reincarnated Morris still did what he wanted and left. Scully and Mulder aren’t really helping anyone here and that’s a bummer. The best monster of the week episodes are the ones where they feel involved and not just bystanders.

“Born Again” ends on a positive note for everyone that doesn’t die. Fiore goes to jail and Michelle Bishop gets to just be a kid again. It’s hard to write about this episode because a lot of it is just bad and repetitive. We’re almost at the finish line and we’ve got one more episode to go and well, it’s another rough one.