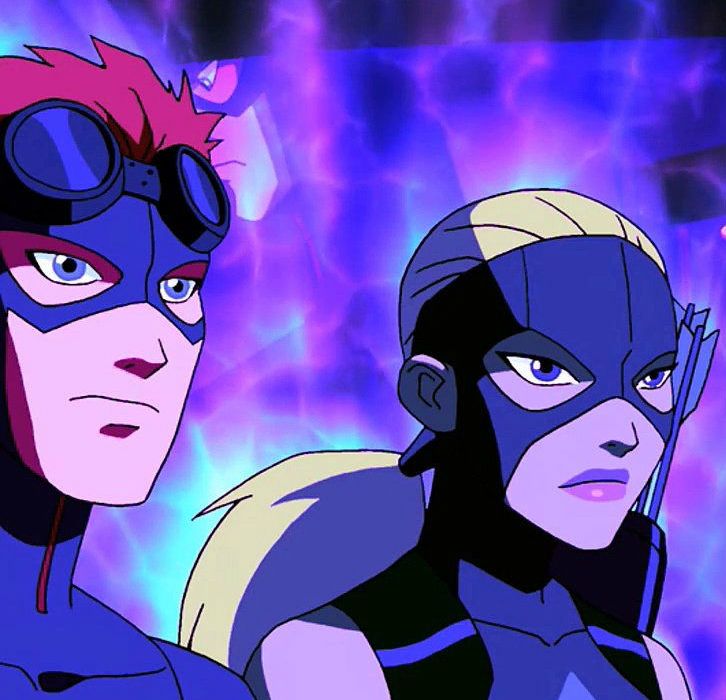 We continue out Multiversity Summer Binge with the ninth episode of Young Justice which is a doozy. I had to look up what the word bereft meant, which is kind of sad, but it’s the past participle of the word bereave, or to be robbed of something. Bereavement is a word used often in funerals and when people have died. There’s certainly a lot of loss here, not in the physical sense, but in memory, which makes this episode one of great character development and starts seeding plot threads that don’t even pay off til the end of the second season. Let’s dive in!

So yeah the team gets mind-wiped entering the fictitious, middle eastern country of Bialya and have the last six months of their memories taken from them because they were linked to Miss M telepathically as they first encounter Psi-Mon. Which that all may sound lame in and of itself, I feel like the memory-erasure as a plot point or arc has been beaten over the head at this point. But it works here.

The team didn’t know each other six months ago. Superboy was still in cryo as a clone and so he has no memories at all and Miss Martian wasn’t yet to Earth and wakes up speaking Martian. Only Aqualad, Robin, and Kid Flash know each other but only in a cursory manner and Kaldur spends the whole episode incapacitated. Artemis really stands out here as you get a couple hints into what her previous life might’ve been like with her remark, “My dad probably wants me to kill you.” And none of the team really feels inauthentic or fake, and hell this is the best version of Wally on the show yet because he makes far fewer inappropriate jokes the whole time. This episode is just really well put together, and instead of completely tearing the team apart Miss M brings them back together and brings them back stronger. Which leads me to my second bit…

This episode really highlights the relationships and character beats, namely with Superboy and Miss Martian who had their awkward kiss/hook-up/offscreen hanky panky, but also with Artemis and Wally. Without Miss M around Wally is less of a pervert which makes me think maybe he’s just really into the green skin? Or green in general? I have no clue. But what he and Artemis have here is kind of cute as he comforts her through being scared acting the more seasoned hero, and her struggles with her past and some scars. When they hold hands when Miss M offers to give them their memories back it feels earned. This is the grown up Wally who isn’t always thinking with his dick. I don’t know why memory loss makes that happen. The only character that maybe really suffers here is Robin, as he rehashes his “whelmed” joke from the first episode because he loses those first few lessons he’s gained about being a member of a team that he can’t learn with Batman. Well and Aqualad who gets shafted yet again after getting his own episode.

Finally, Miss M’s genuine concern for Superboy above everyone else showcases both the best and worst of this team and where they’ll ultimately suffer some, they care too much. But it works here so we keep going…

The final fight scene between Miss M and Psi-Mon is really cool. It’s like a trippy Jack Kirby-esque sequence set in this mind-plane of both characters while their bodies are immobilized in the physical world. This is the kind of sequence that one can’t pull off in live-action and why animated shows and comic books will always be needed to showcase this kind of action. This is the kind of scene that shows us why we need all these different mediums. It’s also sweet as Superboy lends his power to Miss M as she gives him his memories back and the two finally almost get to kiss on screen as Superboy busts up the research facility and the unknown sentient, technology tries to break out as well. At one point Miss M has a shield that is shaped like the Superman emblem just to show how much this relationship is beginning to blossom.

But hey speaking of Kirby…

When Superboy says can I keep him I laughed giddily. I love Sphere as he comes to be called. PING PING. And you can tell already why Superboy and him bond because they are both one of a kind, lost objects. But also there is a Fourth World reference and we learn that Sphere came from the Fourth World and you see a Boom Tube. I love all the Fourth World stuff, and it took me awhile to realize they were introducing some of this stuff this early. This show is really…

You like how everything has led to the other? Clever huh? Yeah not really I agree…
Anyway, the final scene with The Light and Queen Bee obviously talking because she was referenced at the beginning of the episode, there are seeds that are planted that don’t get resolved until the very end of the next season. All the Apokaliptian nonsense, the Fourth World, the technology (that actually continues to pour in since Sphere is just the beginning) is insane. I didn’t realize how much this show was seeding everything to come until this second watch through but again as this world continues to feel bigger and bigger, so too does the conflict, and The Light becomes more and more intimidating.

That’s it for this week, but check but next week as Roy Harper returns to save…Lex Luthor?