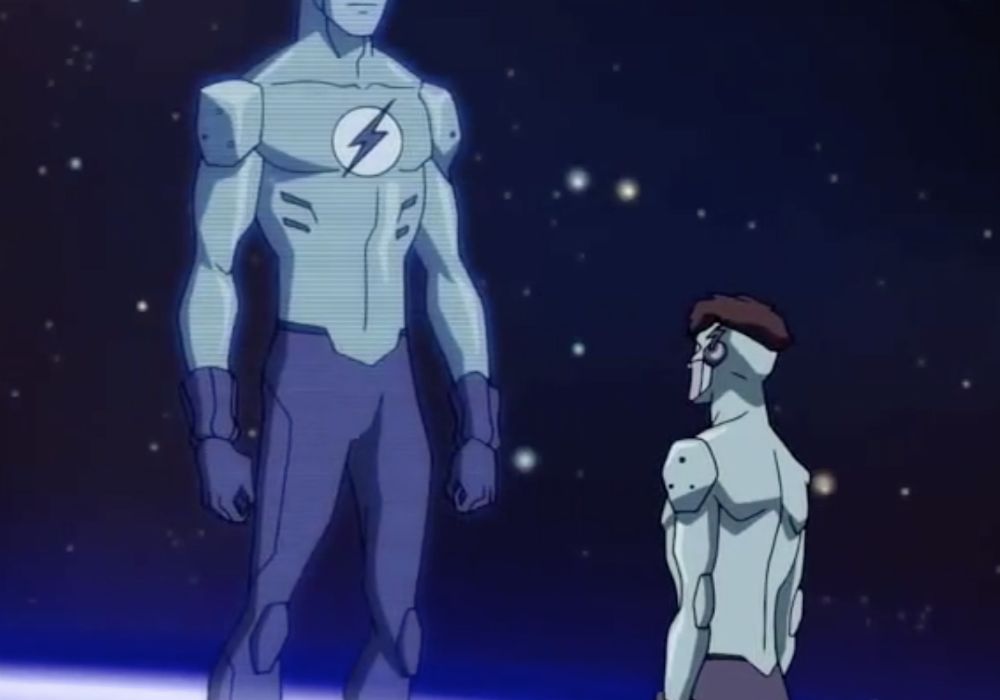 This is it. It all ends here. Or ended, as season three of Young Justice is now only weeks away after a six year hiatus. This is the last installment of our 2018 Summer TV Binge coverage of Young Justice: Invasion and SO much happens. The Earth is almost destroyed. The League is cleared of charges. As the crisis rages we get the cliffhanger of the decade, and not everyone makes it out alive. Let’s dive in!

The trial of what seemed like centuries is finally over and the Justice League is…oh they’re guilty. Or sort of guilty, minorly inconvenienced guilty. Miss M, Superboy and Adam Strange show up about five minutes too late to acquit them with The Light and The Reach’s confessions from last episode, but by appealing to to the Court of Rimbor’s better nature after they ask for a reconsideration in light of the new evidence and everything is fine. Or sort of fine, basically Superboy and Miss Martian convince the judges if they do them a solid they’ll have a better reputation and more people to exploit. So sure.

Miss M and Superboy get out of there quick and zeta beam back to Earth and the League members take their sweet ass time getting home. Why they don’t hurry themselves is unclear. They see Vandal Savage fly by piloting Warworld and instead of engaging him, they let him escape the Green Lanterns fly them back home. It seems very contrived is all that they wouldn’t have tried to book it home, knowing full well The Reach was still there. The League really could’ve used Superman’s help flyiing around the device that went off at the end of the episode. I digress though. If it wasn’t obvious by this episode, let it be known that the trial of the six Leaguers was a very convenient plot device that took the Trinity and co. off the table for way too long this season.

Now, back on Earth, the Team and the League are fighting their butts off against The Reach, defeating them and leading to Blue getting a badass KO on Black Beetle. This whole last fight with The Reach seemed like it very well could have been tacked onto the events of the last episode, with the Team fighting through the ship and stopping them from trying to destroy the Earth. Instead, we get about five minutes of shuffling The Reach off as adversaries before the Team and the League have to ally with Lex Luthor to destroy MFDs (magnetic field disruptors) in world ending plot device.

I get why they did it. Just having people fight through The Reach ship may have been less exciting than going two by two trying to save the planet. It also gave the writers time to deal with Rimbor stuff, although if we could have spent just a little more time there this season, listening to the arguments, getting the inner thoughts of the League members on trial that could have been nice.

What we do get though, the team ups and the conversations that happen within are very cool. La’gann and Aqualad get over their tension in the Atlantic. Wally and Artemis share a moment in Paris before he…well you’ll see. Static and Black Lightning bond in Dakota City, and Impulse and Blue Beetle team-up in Taos. It’s very much a recognition of how hard the Team has worked and worthy they are of being a part of the League. There are great moments that happen. It is also very rushed.

This show hasn’t had a whole lot of trouble tackling some adult themes, but this is the first time a hero has died onscreen I think. We lost Wally West. Now killing Wally is an interesting choice. One it corresponds with a traditional of having Flashes die in “Crisis” events, and indeed Aqualad uses the word crisis after the event is over. It also is fascinating considering Wally’s return in “Rebirth” and him being, in some ways, the heart of the DCU. Obviously this happened back in 2012, before Rebirth and in the early stages of The New 52, but it’s very comic book-y to pick a Flash, if not odd because Wally has not done a whole lot this season.

As Impulse and Barry race in the Arctic to destroy the last device, which has gone off and will destroy the Earth, Wally from the Watchtower runs to join them. Now, having rewatched this this time knowing full well what was coming, my only thought was: where the hell was Jay Garrick? He’s standing next to Barry, Bart, and Wally in Metropolis while Luthor explains the plan to everyone, but then is conspicuously absent here. He was with all the Flashes back in “Bloodlines” when they all four fight Neuron, where did he go here? If Jay had been there, maybe Wally wouldn’t have died. Also the actual moment of Wally dying was very anticlimactic and unemotional and he dies in a very comic book way with a sense that he could very well return.

What is emotional is everything that comes after. Wally tells Barry to tell everyone he loved them and as he breaks the news to Artemis she collapses crying. Miss M comforts her and the rest of the original six team members, plus a few, watch on and weep. The League returns from space and Aqualad breaks the news. Artemis goes to Wally’s parents house and the trio weep together. In aftermath, it hits heavy.

There are so many different small things that happen in the last five minutes of this episode that quickly wrap up and set up going forward. As the show skips forward two weeks and The Reach leave, we get another July 4th holiday, homaging the fact that the first season starts July 4th five years prior. The events include:

– The Reach go off to face a trial with the Green Lanterns and Guardians of the Universe.
– G Gordon Godfrey reports that Lex Luthor has been named Secretary of the United Nations after helping save the planet.
– Nightwing resigns as leader of the Team and quits
– Captain Atom resigns as chair of the League, seeding that role to Black Canary.
– Impulse becomes the new Kid Flash.
– Artemis retires that codename to take up her Tigress mantle going forward.
– Static officially joins the Team.
– Tim and Cassie are revealed to be dating
– Miss Martian and Superboy seem to begin reconciling and reveal they still have feelings for each other.
– The Team gets the okay to operate out of the Watchtower and work side by side with the Justice League.

A lot of these details are closers, but some set up further stories like Luthor being in the UN, and make it seem like The Light is still winning this fight. I put all these here, wondering how many of them might be followed up in Outsiders soon. Still, that’s a lot of information to drop when you think you might be getting cancelled. Of course they’re nothing compared to the closing seconds of the show.

Dick sets out from the Watchtower as the Team get new assignments, some of them to begin investing what happened to Savage and Warworld. He mutters the phrase “Business as usual.” Turns out, he piloted the planet to Apokalips. Savage booms down to the planet and walks past Desaad and Godfrey (which threw me off the first time I watched, but now being trained in Fourth World mythos makes perfect sense) before shaking hands with Darkseid and saying the exact same thing. There are so many questions that so many people have had for six years. Is Darkseid in charge of The Light? Has this been the plan for five years? All of this is heavily orchestrated, and very much, again, a Xenatos Gambit, as the villains win season two as well. At least now we might get some answers in December.

I have reviewed 46 episodes of this show over the course of two summers, and while season two had a lot of pacing problems, this is still one of the best animated superhero shows of all time. The way that Young Justice navigates deep plot threads, character dynamics and relationships, and just manages to build on itself again and again is inspiring. It introduces almost as much of the DCU in two seasons as the entire DCAU did over the course of a decade with multiple shows, and does so deftly without sacrificing quality. It also manages to tell wholly original stories that are very “DC” and big and bold. It’s one of my favorites, and I’m happy to have gotten to go on this journey with you all for two summers.

We’ll be covering Outsiders when it debuts in the winter, but until then I will be making the transition to reviewing Titans (fuck Batman!) which premieres the end of this week. You can also find me cohosting #MakeMineMultiversity.

Please do sound off in the comments below with all your season two and finale thoughts. Thank you all again for being a part of this!