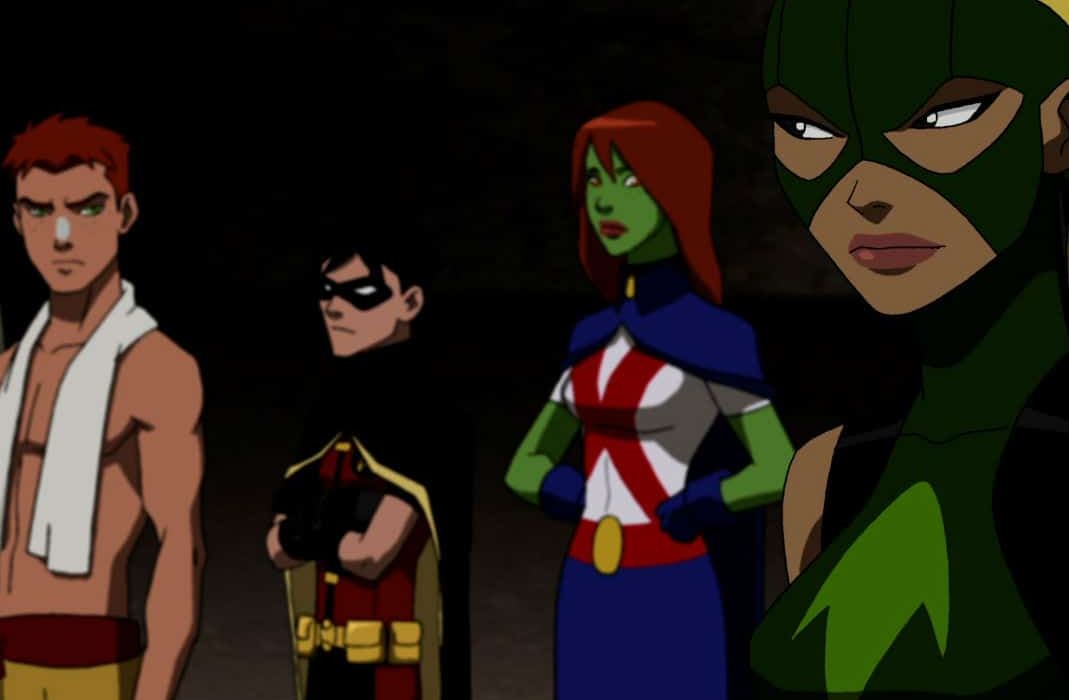 Artemis appears and all is well in the world as we continue our Multiversity Summer Binge of Young Justice! This episode is one of my favorites of the whole series and honestly, Artemis is one of the best characters of the show (no matter what any of you have to say about it.)

So…I kind of hate Roy Harper. Don’t get me wrong he’s got the ultimate amount of swagger and teenage, don’t fuck with me angst, but he’s a terrible hero and a crappy friend. The episode starts at with him trying to save this scientist lady from an island swarming with League of Shadows goons and by the time he gets up there to her they’re running out of time. She’s built this surely evil device the organization needs and he tells her it’s her or the device and so they James Bond it out of the building and onto a motorboat only for him “TO BLOW UP THESE CHARGES HE LACED THE WHOLE ISLAND WITH.” Seriously if he had all these charges he couldn’t have taken the 5 seconds he needed to blow up the device and complete the mission, saving lives and property damage?

Plus when he brings the mission to the team he tells them he had stashed the scientist at Happy Harbor High School unprotected and says “Well my work is done” like a pissy brat craving attention. I haven’t read a lot of good Roy Harper stories I like, maybe he’s better as Red Arrow in Brad Meltzer’s “Justice League.” Something tells me he’s probably still pretty insufferable though.

Wally finally gets knocked down a couple more pegs in this episode which is good because he still has a long, long way to go to mature into the extremely likable character he becomes. He’s a total dweeb in this episode. You gotta feel bad for him as apparently, Keystone City School District starts class super early in August and so he misses the beach session with the rest of the team. Which speaking of the beach, what’s with the weird slo-mo camera on Miss Martian in a bikini? No one else gets that and it’s super odd. But hey comics are real good at oversexualizing teenagers.

It’s hilarious when he finally joins the rest of the team in the cave ready for the beach, holding a bunch of gear, and he trips and it goes flying and a beach ball bounces past Batman. I don’t know why that’s satisfying. Then our newest teammate gets a couple jabs in which leads us too…

I unashamedly think that Artemis is the best character on this show hands down. She is definitely the most real and you can already get some hints of her past in this episode from her clearly not being Green Arrow’s niece (which Dick and Roy allude to) and her interactions with Cheshire and the tease that clearly they know each other and something is up.

Artemis was not a character I was familiar with before watching Young Justice and had to hit the reliable depths of Wikipedia to learn about, but it really feels like the show is the definitive version of her, taking those aspects that make her interesting in the comics (which we get to later in the season) while making her an archer to justify keeping Roy off the team and furthering his arc as the moody loner. You get some strong characterization and a female character who doesn’t take anyone’s crap mixed with some mystery which this show is good at and have the best of both worlds. Plus she’s the only girl Wally doesn’t flirt with immediately and the only one not to put up with his crap. Which I guess maybe that’s foreshadowing? Who knows.

I remember getting into an argument with a friend once about which was correct the League of Shadows or Assassins and I hate that DC alternates in some of their stuff. In the Nolanverse it’s Shadows, and here as well that’s what they go with, but historically it’s always been Assassins right? Luckily we’re in a Rebirth world where apparently they’re two different entities thus ending the debate once and for all but it’s still frustrating when an organization and concept changes names like that.

Anyway, the League of Assassin Types that Stick to the Shadows and Always Seems to be Thwarted by Heroes is pretty superfluous in this episode. I had to look up if the main gray-haired dude was supposed to be Ra’s al Ghul, and I think not, but boy if it was that’s the worst Ra’s ever. The only villain that had any sort uniqueness in this episode was Cheshire but only due to her relationship with Artemis. Make my villains nuanced again!

So the end of this episode implies that there is a traitor on the team, and I think the obvious throwaway at this point is supposed to be it’s Artemis because of the sketchy Cheshire stuff and her interaction with Roy at the end of the episode, but clearly you can already see that a lot of the team is hiding stuff. Robin doesn’t tell Superboy that Wayne Tech being hacked would tie to the Justice League and that he knows Artemis isn’t Green Arrow’s niece. Clearly, there’s still more going on with Miss Martian that we don’t get. Superboy could still have weird clone issues, and Wally and Kaldur haven’t gotten the screen time yet for mystery but just you wait. The show keeps asking more questions than giving answers which are something it’s extremely good at. We got awhile until the “infiltrators are outfiltrated.”

That’s it for our thoughts this week! Tune in next time for our visit to The Tower of Fate!