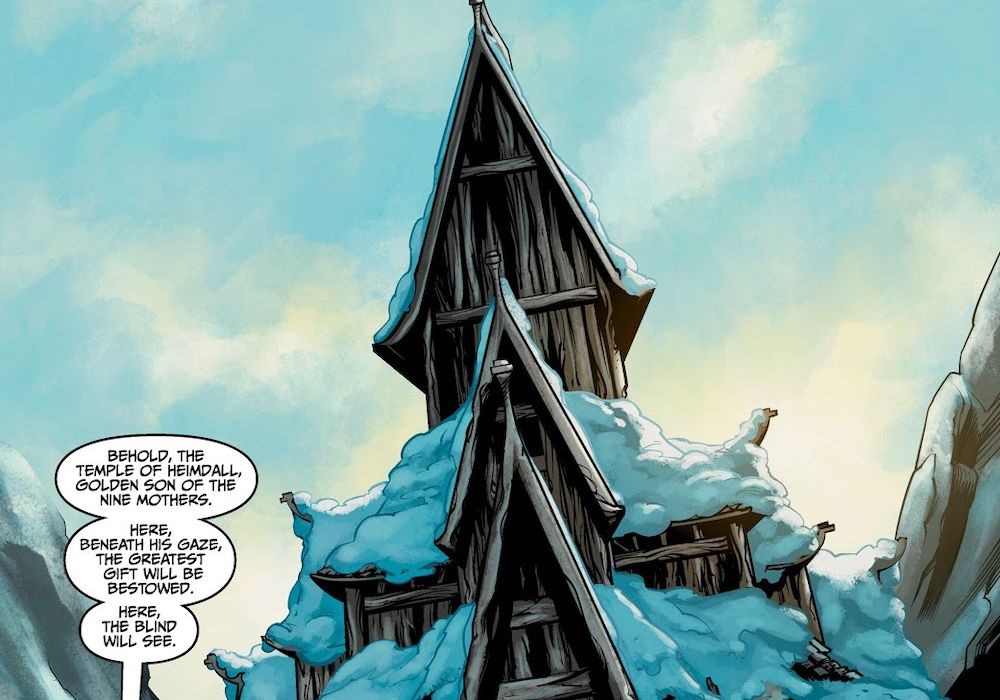 Welcome back to the Isu Codices. Since our last journey into pre-unification Norway, the latest installment in the Assassin’s Creed game franchise was released, and with it a bit more information about the world. Not nearly as much as we may have hoped, but it may color what is said here. However, there will only be spoilers so far as they are important to what is going on in this miniseries.

Warning: This issue contains images that are very violent, much like how the game that comes afterwards has included decapitations and dismemberment in gameplay.

Furthermore, there is not any completely new information regarding video game elements or historical knowledge outside of what we have already discussed, and so we will be foregoing the “History Lessons” and “New Concepts” sections this month, but will be including a variation on the latter known as “Updated Concepts.”

As a side note, the game has confirmed that in names and Norse words, a “j” is meant to be pronounced like a “y.” Also, the words “king” and “jarl” will be used interchangeably, seeing as they both equate to the same thing in this period and location.

The apparent Hidden One shown in the most recent issue, “Ammon,” has a name that may very well be an alias. The name “Ammon” is a variation on the name of the god Amun of Egyptian mythology, much like how Aya of Alexandria took up the alias “Amunet” after taking her role as a Hidden One in full. As how the Order of the Ancients takes up aliases (based around animals in the Ptolemaic era, and around other terms in others), the Hidden Ones appear to do the same in select instances, so whether Ammon is truly his name is unclear. However, much like Amunet, the original name of Ammon, if any, is likely irrelevant. 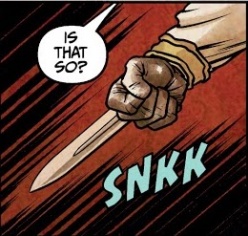 While we have discussed Hidden Blades before, most of the time they have been drawn from the inside of the forearm, with most incarnations until the modifications made by Levantine Mentor Altaïr Ibn La-Ahad in the twelfth and thirteenth centuries being dangerous to the point that they would sever the ring finger of the hand wearing one either by design or due to a hair trigger (the latter being the case of the first such incident with Bayek of Siwa in 48 BCE when assassinating Eudoros “The Hippo” in the bathhouse of Alexandria in Ptolemaic Egypt).

Very few people have worn the weapon on the outside of the arm, for what could be perceived as both stealth-based (hence the name “hidden”) reasons and biological ones based around a muscle used to activate or deactivate the trigger mechanism without needing to move the fingers. Certain users, such as Eivor Varinsdottir herself once given a Hidden Blade by Hidden One Basim Ibn Ishaq, instead wore it on the outside of the arm, with the dual reasoning of not caring about hiding such a weapon and to avoid the handicap forced upon those directly connected to the Brotherhood.

Much like in the previous issue, there are multiple storylines more or less concurrent with one another. Rather than write them out in order, they will be written up in the order that makes the most narrative sense.

Following being told about a very rich man, Sigurd traveled with his friend Knud to said man’s estate near the Dniester River (likely around the area of the town of Bulgar), where they snuck into the castle by way of a covered wagon (despite Knud’s preference for an all-out raid). Rather than fight everyone, Sigurd prefers that they wait until the feast going on runs its course, given everyone at the table will be quite intoxicated and unable to fight back effectively.

After the crowd were indeed very drunk some time later, many of which have passed out, Sigurd began to steal from the place, starting with a tapestry of Yggdrasil the World Tree of Norse myth. Interestingly enough, Yggdrasil itself is very relevant to the overarching story of Valhalla, including for Sigurd and Eivor especially, but how will be left unexplained unless it becomes relevant to this miniseries (which is unlikely given its status as a prequel).

One of the drunk men, the one who was lain out on a couch just in front of the tapestry, unfortunately awakened at that moment and tried to attack Sigurd, causing Sigurd to be forced to use his new Damascus steel sword Vengeance to summarily kill him, the scream alerting people nearby, including the man in charge of this castle. 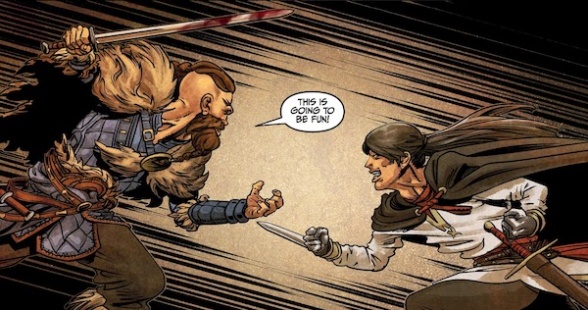 Norse raider versus Hidden One. Round One… FIGHT!

Hearing the commotion, a man identified as “Ammon” went to deal with the intruders himself to protect the merchant who owned the castle, and seemingly fatally wounded Knud when Sigurd had his back turned. When the Norse raider turned around once more and saw the apparently very rich man standing over the bleeding body of his friend, he claimed that Ammon was an unarmed man (despite seeing a sword clearly in its sheathe at his left hip) who was saying he had picked the wrong party to gatecrash. However, with the drawing of a Hidden Blade on the outside of his right arm, Ammon showed that he was far from defenseless, exciting Sigurd to begin a fight. 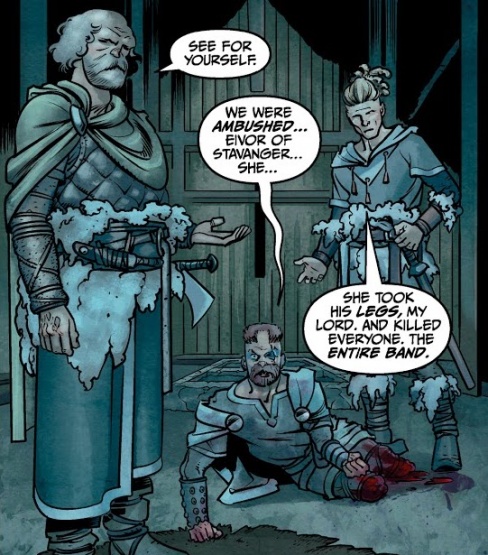 From left to right: Bjarke, Roscoe, and Taras

Following the raid in the previous issue, the one and a half survivors of the band from Agder (Taras and the legless Roscoe) returned to King Kjotve, noting that the “Seeker” (Gull the seer) had been taken away by Eivor of Stavanger, i.e., Eivor Varinsdottir of the Raven Clan. Dissatisfied in the least, Kjotve punished the already legless Roscoe by cutting off the top of his head down to his eye sockets in a single slash of a sword, and thereafter asked a messenger, Bjarke Broadside of the Wulfing Clan, as to the location of the jarl’s “champion,” Viggo. Hearing Viggo had been sent off to “the temple,” he called him back in order to recover Gull, who Kjotve claimed was “the key.” 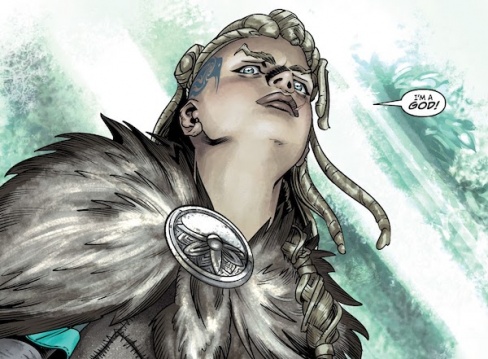 Well… 'wrong' is such a strong, unambiguous word…

Speaking of Gull, Eivor Varinsdottir and Tora Auzoux were practicing combat against one another using traditional Raven Clan gear with the seer watching it all happen in the fields of Stavanger. Eivor was decidedly very full of herself, proclaiming herself a god (a status that is… a bit complex in this franchise given the Isu, but not as if she would know) and deserving of the appropriate honor by her jarl. Further, she was angry about being humiliated in front of everyone by her adopted father rejecting her “gift” of Gull, ignoring that having stolen her away was a very bad idea in the first place.

During that practice, Eivor told Tora about what Gull had told her, asking for her friend to keep a secret. Meanwhile, Gull goaded them on, speaking of the “Æsir’s hoard” high up on the Feiknstafir mountains and deriding Tora as being a coward for expressing doubts about the claims (invoking her ire), claiming herself capable of leading them to further glory and riches. 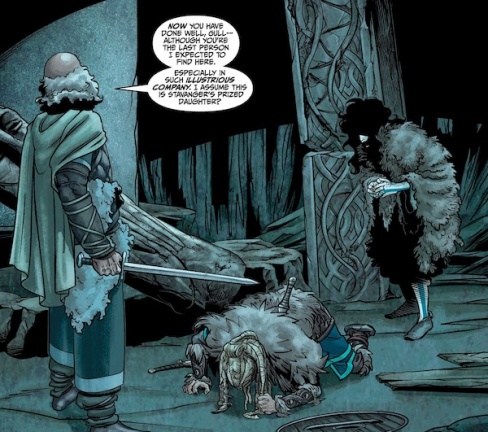 Curse your sudden, but inevitable betrayal!

After a several-day trek up the mountain ledges of Feiknstafir, during which Gull nearly died of a fall before being saved by Eivor, the two, without Tora, found their way up to the Temple of Heimdall (likely the very same temple noted by Kjotve earlier). However, despite Gull’s claims of riches, the entire place had already been picked clean long ago, perhaps even decades, with the place occupied by Kjotve’s men led by Bjarke Broadside. As it turned out, Gull had been luring Eivor into a trap all along, calling upon the Adger forces to capture Eivor as a present for their jarl. Despite fighting valiantly, Eivor was felled (nonfatally) by a knife to the back from Gull herself. In spite of her claim that she would not be a prize and would claim all in the temple in the name of Styrbjorn, Bjarke merely found that amusing, as he claimed Styrbjorn already dead as a result of a raid in Stavanger at that moment. 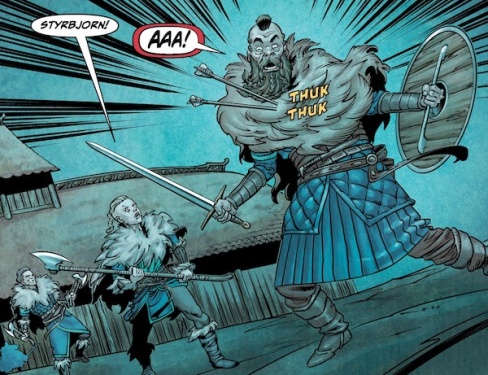 This event would be more shocking if we didn't know he shows up in the game itself, but whatever works.

Back at Stavanger, Dag was talking with Tora, noting her clearly visible displeasure over what was happening with Eivor, who had not been seen in days for reasons unknown to almost everyone. Before he could force her to talk, however, there was the sound of an attack on the town, a scream that provoked their king to take up arms. However, immediately after leaving the building, he was struck with multiple arrows, an at-least three-person raiding party at his doorstep in the name of “Kjotve the Rich,” seemingly indicating that Kjotve was in fact the very same man as in the historical record.

It is unlikely, to the point of being all but impossible, that Styrbjorn Olafsson is dead at the issue’s conclusion, considering he is very much alive in the timeline of the game taking place years later, but the issue ends on this cliffhanger nonetheless.

We’ll be back next time with the conclusion of this miniseries, along with perhaps a bit more for us to discuss about how the comics may lead into what goes on in the main story years later. 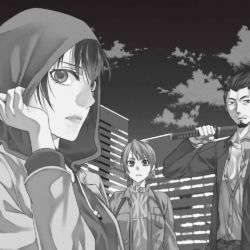 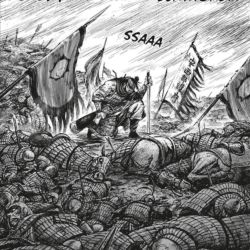 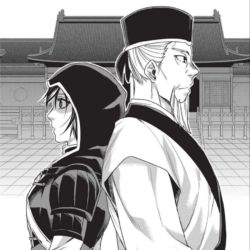 Welcome back to the Isu Codices. This month, we are looking into the English translation of the third volume of the Japanese manga “Assassin’s Creed: Blade of Shao Jun.”New ConceptsHistorical RevisionismKey to the historical fiction take on Assassin’s Creed, and even to how this very column addresses it, is its own approach to history. According […]