September means a lot of things: Labor Day, back to school, the start of football season. But this year it also means something else; it signals the beginning of “40 Days of Supergirl,” a Multiversity event that celebrates the Girl of Steel across all platforms. We will be featuring all sorts of amazing content from now until the debut episode of Supergirl season 2 on October 10th. Join in the fun on social media by using the #40DaysofSupergirl hashtag.

The centerpiece of the event is our fourth art month, after our amazing Abe Sapien, Hellboy, and Guardians of the Galaxy themed projects. We have amazing artists – both established and up and coming – who have contributed original pieces of art featuring Supergirl, many of which will be going up for auction, with the proceeds to benefit Room to Read, a wonderful literacy charity that helps people all over the world. Enjoy the month, bid on some art, and help make some lives even better the best way we can think of: through comics!

Stay up to date on all of our Supergirl content by clicking here. 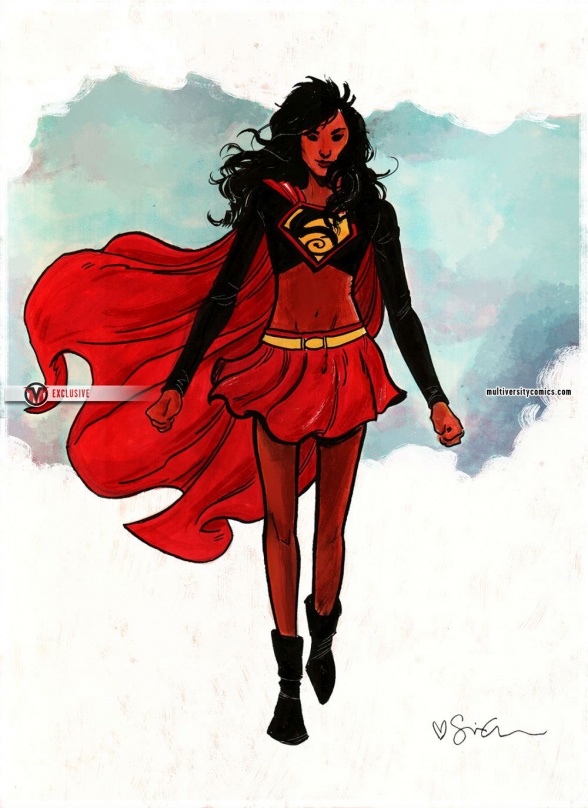 Sina Grace is a Los Angeles-based artist, best known for Image’s “Li’l Depressed Boy” and “Penny Dora and the Wishing Box.” He is the writer/illustrator of “Burn the Orphanage”, “Not My Bag,” and “Self-Obsessed,” the latter of which Sina also made into a webseries. Sina has also contributed words, interiors, and covers to books like “Secret Wars Journal” for Marvel, “Invincible” for Image, “Doctor Who: The Twelfth Doctor” for Titan, and “Adventure Time” and “Regular Show” for BOOM! The former editorial director of Skybound, Robert Kirkman’s Image imprint, Sina’s artwork has also been used by bands such as Rilo Kiley, Tegan and Sara, and Childish Gambino. Check out his website, his Big Cartel store, his Tumblr, and you can follow him on Twitter (@SinaGrace).

Sina’s piece will be up for auction later this fall – keep checking back on Multiversity for details!

More ’40 Days of Supergirl’ Art Pieces Are Up For Auction!

We’re still rolling out more auctions as part of our ’40 Days of Supergirl,’ and there are a few pieces ending later this week would look wonderful upon anyone’s wall. Check out the listings here. First up, we’ve got “Iceman” writer and “Lil’ Depressed Boy” artist Sina Grace. Next up, “Stumptown” and “The Last Siege” […]

As we noted a few weeks ago, we are auctioning off many of our ’40 Days of Supergirl’ pieces. We currently have 10 pieces up, with a few more to come, but this round in particular features a few of my personal favorites. Here is what we said last time:Three years ago, we did an […]

We are (Finally!) Auctioning Off Our “40 Days of Supergirl” Art Pieces!

Three years ago, we did an art month called “40 Days of Supergirl,” where some of our favorite artists did Supergirl sketches. Some were digital, but many were physical pieces of artwork. It took about 8 months for all the pieces to drop in, but we had planned on doing an art auction, to benefit […]