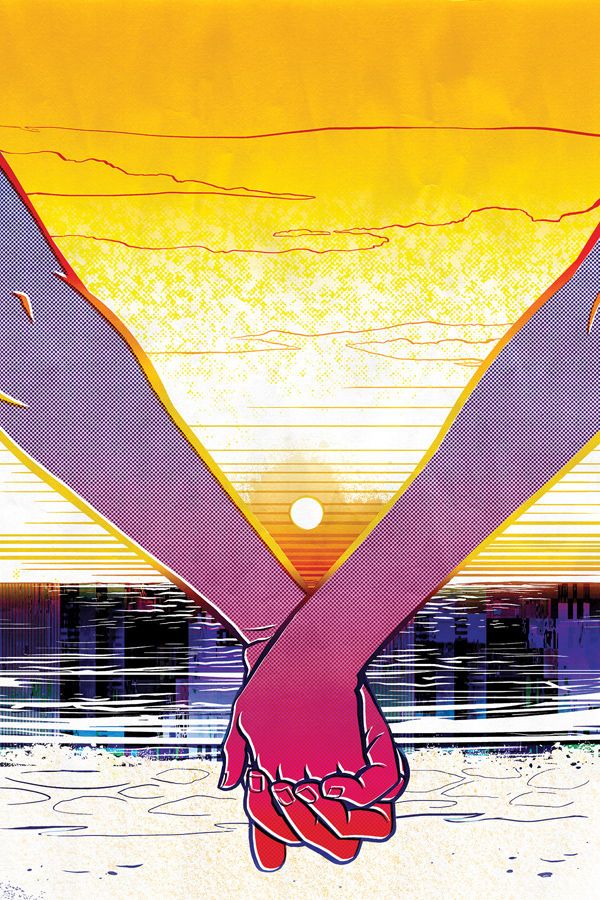 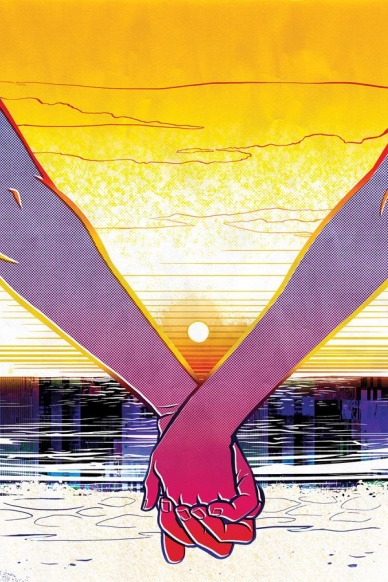 Below find out interview with Curt Pires as he talks about the series, working with a different artist each issue and what inspired “The Tomorrows,” Curt also provided preview images from “The Tomorrows” #6. Issue #5 drops today.

To start, for anyone not already reading “The Tomorrows” what would say is the hook to bring them in? In addition with issue 5 out this week, for the readers who have been invested in the series, what can they expect as the first volume wraps?

Curt Pires: Hah, This is a series that is proving increasingly hard to boil down to one line, but I’ll try. “The Tomorrows” is a series about a future where art is illegal and mass surveillance has completely taken route. “The Tomorrows” are a group of artists/terrorists who fight to liberate people and information and make reality more beautiful.

As for readers already invested, issue five out this week reveals the connective thread/force behind the events of all the issues so far, as well as opening up some new questions. Issue six will wrap things up, but leave the door open for more. I’m excited for people’s reactions as they start to figure things out and put the pieces together.

I’ve enjoyed that each issue feels a bit self contained while engaged in a larger story and theme of the series. How has that style of storytelling been for you? Do you take a different approach to each issue based on the artist’s style and what their strengths are?

Pires: It’s unlike any other book I’ve worked on before. Each issue really feels like an issue one in a way because it’s the first issue I’ve done with each respective artist, it’s a new experience. It’s fun though. I do try and tailor each issue to the artist’s strengths, and give them an opportunity for them to shine. As I was approaching artists for the book, and eventually placing them for their respective issues I was very conscious of their work and tried to put each artist on an issue that would serve as a spotlight for their work.

I think what I have always enjoyed about your work is you always seem to challenge your readers with your comics either with social commentary, abstract narratives and even some meta elements (writing yourself into the comic). Do you think comics could be more active in bigger discussions and issues like we see at times with novels and films?

Pires: I definitely wish comics were more active in social and abstract discussions, yeah. It’s a major source of frustration for me to be honest. Comics are such a rich medium to communicate ideas, that it feels wasted that most people don’t even bother. In general I feel like mainstream comics in particular are a little one note, and I wish more people would put themselves out there and say something. Art can be entertaining AND have something to say. Like Kirby said: “Comics Is Journalism” let’s show it. 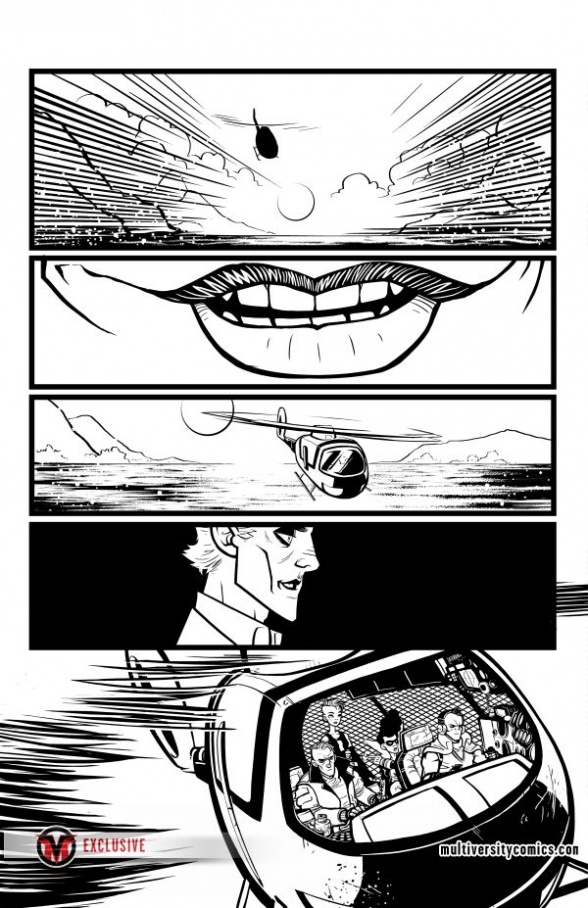 Exclusive line art from The Tomorrows #6

The approach for a different artist is pretty unique for a comic series. Both you and Ales Kot (“Zero”) have shown this to be a viable and successful format for a series. Would you like to see this done more? What do you see as the benefits are and negatives to this style of storytelling?
Continued below

Pires: Credit where credit’s due, Warren Ellis was doing this/pioneering this approach before Ales Kot and I were even a part of the conversation. He’s done it a couple times actually, first with Global Frequency, then again on his “Secret Avengers” run (which in particular was a big influence/guide towards putting together “The Tomorrows”).
There’s definitely something really fun about the approach and getting to work with all these amazing artists. The positive/negatives are entirely subjective to the creator I think. Overall it’s a lot of fun and I’d love to see more people take a crack at this approach.

I loved in issue one the reference to there being too much of an info dump. Is that something you are very aware of with “The Tomorrows?”

Pires: Haha, Thanks. That scene in particular I was aware that the pages were getting dense with information about backstory/the world, so I thought it would be funny to have one of the characters just flat out call it out, in a way that would acknowledge the reader experience. Of course right after she says that the info dump continues…
I definitely try to be aware of density of information. There are times to just go for it, and times to pull back a little and go for a more minimalist approach, part of being a good writer is knowing what approach is right for what moment.

How have you approached the task of world building with “The Tomorrows?” There are some really great city and character designs throughout the series with a near future dystopian vibe. Are you letting the artists build upon it themselves or do you have a pretty formulated idea of the world for yourself?

Pires: It’s all about collaboration for me, and keeping things fluid. I have thoughts and ideas and I certainly communicate them to the artist, but I also let them breath and do what they want. I do have a pretty concrete Idea of the world in my head, for sure.

Pires: That’s a hard question to answer since I feel like my relationship to the book, and to all my work really is evolving. It started really as a place to exorcise/expunge some of my fears about the future and mass surveillance and where I saw we as a society were headed, and it’s still that, for sure, but as we’ve gone on my relationship with the work has become more complicated as I’ve gotten invested in the characters and their lives and what it all means to me.

One of the great things about “The Tomorrows” is that the villains are elements that are very much present and troublesome in our world today. Often comics deal with the types of villains we are not going to see in our typical day to day. How do you balance the idea of real world threats with the at times over the top nature of comic books?

Pires: I guess, it really just comes down to writing good characters. No good character is one thing. Even “villains” in the narratives we as a society consume are complex characters with their own stories and motivations for the actions they take. I try to acknowledge that. I like to marry the real world fears and evils some of these character represent with some absurdest elements, because, let’s be honest, taking yourself too seriously can be dangerous. Even when I’m tackling serious issues, I want it to be fun, so I think that’s where that comes into play.

Issue six in particular we’ll get to see a bit of why Maxwell Hughes is doing what he’s doing, and it’s about as sad and horrifying as you’d expect. Same with issue five, we reveal who effectively serve as the series “villians” but we see how complicated it all is, and how, in their heads, they try to justify what they’re doing. Can’t get into that too much more without spoiling the issue though… 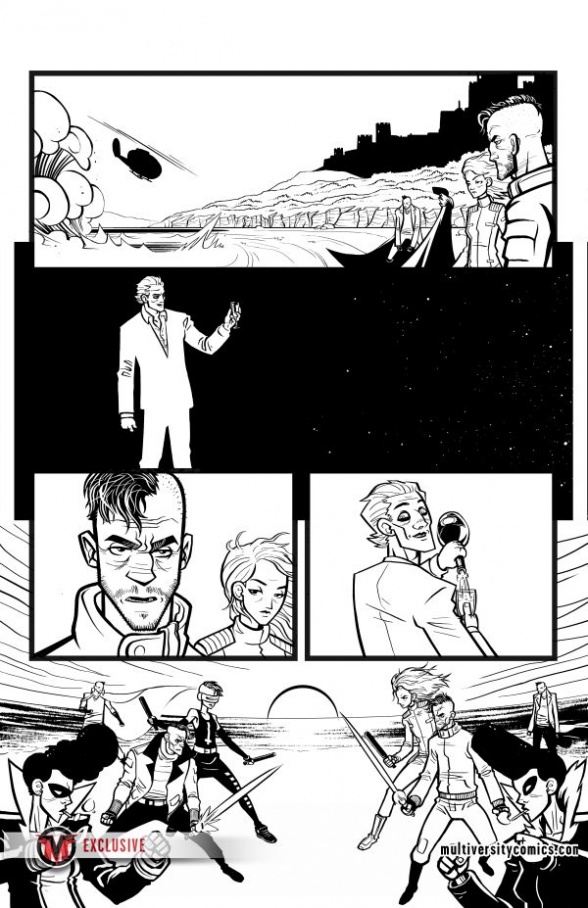 Exclusive line art from The Tomorrows #6

Art, media, music, censorship, corporations all are major themes in “The Tomorrows.” What media (music/films/comics/books) had an influence on you in creating the book? If people wanted to pair it with other media what would you suggest?

[Editor’s note: the list below is presented as sent, so forgive the lack of Multiversity style book]

Music: Sparklehorse (particularly the collab with danger mouse) DIIV, ATARI TEENAGE RIOT, PASSION PIT (actually a bigger influence on THE FICTION, named last two issues after tracks), Grimes, Neon indian, Brian Eno, Chemical Brothers (woke up and was listening to the track ANOTHER WORLD and checking email when I received the email that MAYDAY was greenlit), Foster the People, Gerard Way, Julian Casablancas and The Voidz, Lany, Madeo,Nelson London, Nicolas Jaar, Phoenix, Rey Pila, Ryn Weaver, Tame Impala (Currents is probably the album that captures the transitory nature of my life at the moment, in a weirdly autobio way) Twin Shadow, The Vaccines.

Films: LOVE 3D by Gaspar Noe is my favorite film of the year, Enter The Void, Only God Forgives, Drive, Two Lovers, any film by James Grey for that matter, The first matrix film, Palo Alto, Somewhere, Akira, The nihilism of Sicario, information density and dialogue of Steve Jobs, Surrealism of the work of David Lynch (Twin Peaks in particular), Postmodern Nihilism of Pizzolatto.

Mostly when I connect with films it’s narratives about the things lurking on the outsides of our consciousness, our desire to love and be loved, and the way we destroy ourselves in the pursuit of that, and the loneliness that seems to lurk at the heart of the human condition, that can annihilate us all in our weakest moments, but also the insane beauty that borders it, and the love we can pull from that space, “I’d like to think we can fall in love over and over and over again” -Electra from Noe’s Love 3D.

Hard for me to suggest what to pair with TOMORROWS but I’d really love if people listened to this while they read it.